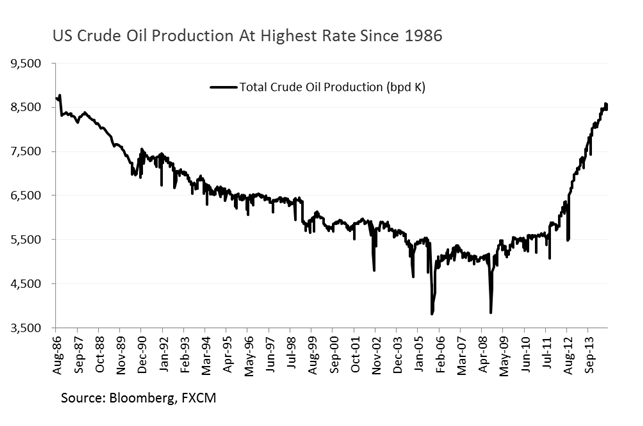 Crude oil remains in a precarious position as escalating tensions in Iraq fail to spark fear-driven buying of the commodity. Similarly, the precious metals are exposed to further weakness as traders look past geopolitical turmoil alongside a stronger greenback. Finally, copper’s recovery could prove short-lived following a disappointing set of Chinese manufacturing figures, which may rekindle fears of a more severe growth deceleration.

Crude is drifting lower during the Asian session with an absence of major catalysts to spark a recovery for the commodity. Brent’s lackluster response to a flare-up in the ongoing Iraqi turmoil suggests traders have become desensitized to fresh news flow from the OPEC producer. This may be warranted given that supply disruptions due to the conflict have thus far proven minimal, if not non-existent.

A mixed set of inventories figures from the Department of Energy on Wednesday also left the commodity lacking fuel. A positive signal offered by a decline in total crude stocks was offset by a jump in supplies at Cushing. US production also rose to a level just shy of its 2014 peak, which was the highest rate since 1986. However, perhaps more concerning than the rate of production is the near parabolic increase over recent years (see chart below).

With developments in the Middle East proving insufficient to yield a recovery for the WTI and Brent benchmarks the pair are left wanting for catalysts to spur a bounce. Nonetheless, the speed and magnitude of recent declines may afford some profit taking on short positions and slight recovery for crude oil.

Gold is set to post its fifth consecutive day of declines with the yellow metal having plunged by more than 1 during the session thus far. Fading concerns surrounding turmoil in Eastern Europe and the Middle East, as well as a stronger greenback have created a perfect storm for the yellow metal.

While concerns surrounding Ukraine remain a distant blip on traders’ radars the alternative assets could continue to suffer. Additional risks are posed by the potential for a sustained recovery for the US Dollar following a surprisingly hawkish lean in the FOMC Minutes released on Wednesday.

US Initial Jobless Claims and Markit PMI figures are the only medium-tier economic events from the world’s largest economy over the remainder of the session. However, the reaction from the USD has proven somewhat muted to these prints in the past, casting some doubt over the potential for the pair to sustain the reserve currency’s advance. However, speculation over a less dovish tone from Yellen at her upcoming Jackson Hole address could lead the US Dollar higher, which in turn may keep some pressure on gold.

A surprise deterioration in Chinese manufacturing figures today saw copper’s recovery halted in its tracks. While the leading indicator remains in expansionary territory the slump adds to a string of lackluster economic figures from the Asian giant, including in the housing sector and the credit market. If we witness a broader weakening in Chinese data it could rekindle deceleration fears, which in turn would weigh on the base metal. 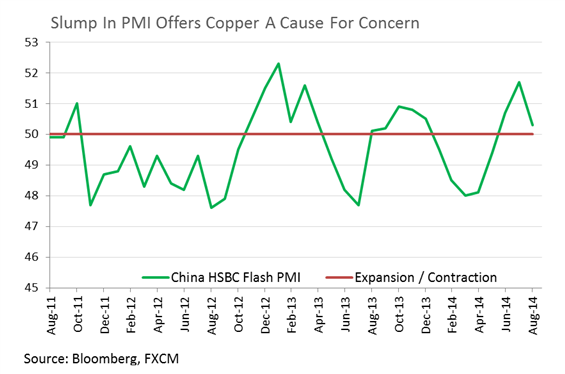 The risks remain skewed to the downside for crude with a core downtrend still intact. Sellers appear intent on keeping the commodity capped below the 93.60 mark which casts the spotlight on the H&S target and 2014 low near 91.20. However, given the magnitude of recent declines the potential for a short term corrective bounce should not be neglected. A daily close above the descending trendline would likely be required to signal the possibility of a more sustained recovery.

Gold continues its journey to the 1,280 target that had been offered in recent reports. With an absence of a key reversal signals a crack of the key support level would open the door to a knock on 1,241. However, a multi-month low for the ATR warrants some skepticism for a push lower given anemic volatility readings generally do not support breakouts.

A descending trendline on the daily continues to keep silver in check as the precious metal descends towards the 19.00 target. Sustained negative momentum reflected by the Rate of Change indicator supports the potential for further weakness. The possibility of a recovery is doubtful at this stage, given key reversal candlesticks are lacking.

Copper’s corrective bounce has left the commodity at a critical juncture as it threatens to break above the 50% Fib near 3.19. A daily close above the hurdle would indicate a shift in sentiment and a possible return to the recent highs near 3.29. However, while below 3.19 and its descending trendline the potential remains for selling pressure to return and a descent on 3.12.

Copper: Threatening A Shift In Sentiment

An Evening Star formation near the critical 900 ceiling offered an ominous warning of a correction for Palladium. However, the potential for further weakness may be limited given buyers are likely to return near the lower bound of its ascending trend channel. A daily close below the 861 barrier and 200 SMA would be required to mark a more significant top.

An absence of bullish reversal signals and presence of a sustained downtrend for Platinum may yield further declines for the commodity. A daily close below the 1,424 floor would open a run on the 1,395 barrier. However, after nine straight days of declines a corrective bounce seems overdue at this point. A more sustained recovery would require a leap over the descending trendline.