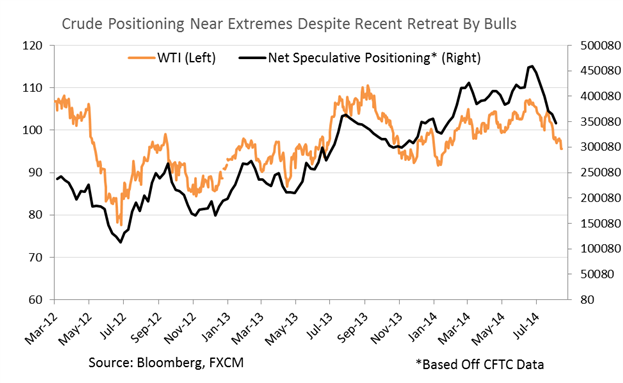 Gold Searches For Direction Ahead of US Data, Crude Oil Plummets

Crude oil plummeted on Thursday despite an absence of fresh fundamental catalysts, leaving the commodity at a crossroads near the critical $95.00 handle. Meanwhile, the glowing embers of geopolitical turmoil may continue to offer gold and silver a source of short-term support.

WTI surprised traders on Thursday after plunging by over 2 percent despite a lack of major fundamental news flow. Media sources cited mounting speculation over a supply glut and signals of fading demand for the commodity as possible culprits for the decline.

An examination of trader positioning reveals that bullish bets remain near extremes. This suggests that a further unwinding of longs could lead the commodity lower. However, the speed and magnitude of the decline over recent weeks raises the possibility of a short-term corrective bounce.

While the rain may have eased the lingering storm clouds of geopolitical turmoil continue to support gold and silver via safe-haven demand. Regional conflicts are inherently difficult to predict and uncertainty surrounding Eastern Europe could keep the precious metals elevated in the short-term.

US data due over the session ahead may also afford the precious metals some guidance via their pricing currency, the US Dollar. University of Michigan consumer confidence figures are tipped to reflect an improvement in sentiment within the world’s largest economy. However, the potential for a lift in the leading indicator to deliver sustained US Dollar strength is questionable, based on its limited influence over shaping Fed policy expectations at this point.

As noted in recent commodities reports the risks have remained skewed to the downside for WTI. A sustained downtrend alongside building negative momentum (signaled by the ROC) suggests the potential for further weakness over the coming weeks. However, in the short-term the commodity may be afforded a corrective bounce given some hesitation to push under the nearby 95.00 floor.

Choppy price action continues to plague gold after a failed attempt to breach the 1,319 ceiling. Several Doji formations on the daily offer noteworthy signs of hesitation amongst traders between key Fib levels. A break below the 1,300 floor would be required to set the stage for an extended decline towards 1,280.

Silver is set for a make-or-break moment as the precious metal teases at a push past its recent lows near 19.75. A break of the floor would set the commodity up for its next leg lower to the psychologically-significant $19.00 handle. A daily close above the descending trendline and 20.10 ceiling would be required to shift the bias to the upside.

Copper has completed a double top formation with a break of the baseline suggesting the potential for further weakness. The daily close below the 3.117 mark (61.8% Fib) sets the stage for a descent to the base metal’s May lows near 3.01. A climb back above the 3.19 hurdle would be required to negate a bearish technical bias.

Palladium continues to demonstrate resilience with the commodity resuming its upward ascent in recent trading. An absence of bearish reversal candlestick patterns and a climb into positive territory for the ROC indicator signals the potential for further gains. Clearance of the 885 barrier would open the psychologically-significant 900 ceiling.

Platinum remains at a critical juncture as it retests its ascending trend channel on the daily. A push below the barrier alongside the Evening Star formation would warn of a correction to 1,443. However, given the medium-term upward trajectory of the commodity room should be allowed for a corrective bounce.