Crude Turns To Inventories, Gold Facing Mixed Cues Ahead Of US Data

Crude oil remains in a precarious position as Iraqi supply disruption fears subside with additional cues to be offered by upcoming US inventories data. Meanwhile, gold and silver are similarly vulnerable to ebbing geopolitical tensions which stand to sap safe-haven demand for the precious metals. Finally, some of the pressure on copper may ease with Chinese economic data flow set to slow over the remainder of the week.

Crude benchmarks took another beating on Tuesday with Brent suffering a drop of -1.59 percent – it’s largest daily decline in more than a month. Fading oil production concerns in Iraq as well as reports of increased supply from OPEC are the likely sources of weakness for the growth sensitive commodity.

The DOE’s Weekly Petroleum Status report due over the coming session may offer WTI some additional guidance. Total crude stocks are tipped to reveal the seventh straight weekly decline alongside another expected drawdown for gasoline inventories. However, a recovery for crude on the back of another bullish DOE report may be difficult given the potential for easing OPEC supply concerns to offset positive cues for the commodity.

Gold Faces Conflicting Cues Ahead of US Data

The precious metals continue to search for direction as traders assess the potential for a flare-up in regional turmoil. Ongoing uncertainty surrounding Eastern Europe may afford gold some safe-haven demand in the near-term. However, an eventual passing of the storm may see the alternative assets vulnerable to a correction as traders unwind fear-driven positioning.

US Advance Retail sales data may offer gold and silver some additional bearings via its influence on the pair’s pricing currency, the US Dollar. Despite a recent firming in US data Fed policy expectations have not materially shifted towards the more hawkish end of the spectrum. This may leave the greenback lacking the required drive to sustain an advance and in turn afford gold and silver some breathing room.

Credit growth as measured by new Yuan loans dropped to its lowest level in 6 years as reported by Chinese authorities today. Additional data from the Asian giant released during the session revealed a moderation in retail sales growth and industrial output. Taken together the figures buck the trend of recent upside surprises from Chinese economic data, and have caused deceleration fears to linger.

The disappointing readings saw copper resume its descent with the base metal having now slumped by close to 4 percent since its July highs. However, a void of major news flow from the region over the remainder of the week suggests the required drive to sustain further declines may be lacking. This in turn could see some of the selling pressure on the base metal ease. 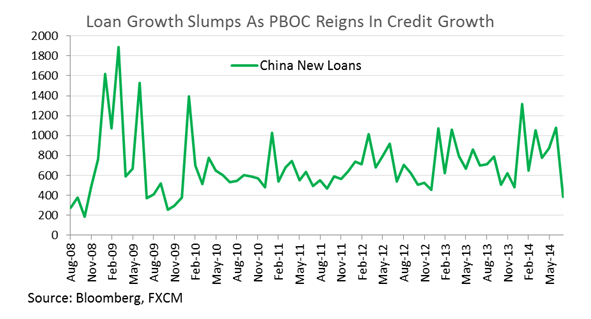 Downside risks remain for crude given the short-term downtrend remains in force (signaled by the 20 SMA and trendline). The press past the 97.50 barrier casts the spotlight on the recent lows near 96.30. Clearance of the 98.90 hurdle and descending trendline would be required to invalidate a bearish technical bias.

Choppy price action continues to plague gold after a failed attempt to breach the 1,319 ceiling. A pullback from the 61.8% Fib at 1,319 has yielded a Shooting Star formation. However, the reversal signal has not seen the required follow-through to warn of a more significant correction at this stage. A break below the 1,300 floor would set the stage for an extended decline towards 1,280.

Silver’s sideways drift over the past several sessions may give way to a break lower with indications of a short-term downtrend remaining intact. A push past what is likely weak buying support at 19.75 would pave the way for a descent to the 19.00 floor. A daily close above the descending trendline and 20.10 ceiling would be required to shift the bias to the upside.

Silver: May Resume Its Descent With Bearish Signals Intact

Copper has completed a double top formation with a break of the baseline suggesting the potential for further weakness. This puts the spotlight on the nearby 3.117 mark (61.8% Fib), which if broken would set the stage for a descent to 3.01. A daily close back above the 3.19 hurdle would be required to negate a bearish technical bias.

Palladium continues to demonstrate resilience with the commodity resuming its upward ascent in recent trading. An absence of bearish reversal candlestick patterns and a climb into positive territory for the ROC indicator signals the potential for further gains. Clearance of the 875 barrier would re-open the 2014 highs near 885.

Platinum is set for a make-or-break moment on a retest of its ascending trend channel on the daily. A push below the barrier alongside the Evening Star formation would warn of a correction to 1,443. However, given the medium-term upward trajectory of the commodity room should be allowed for a corrective bounce.