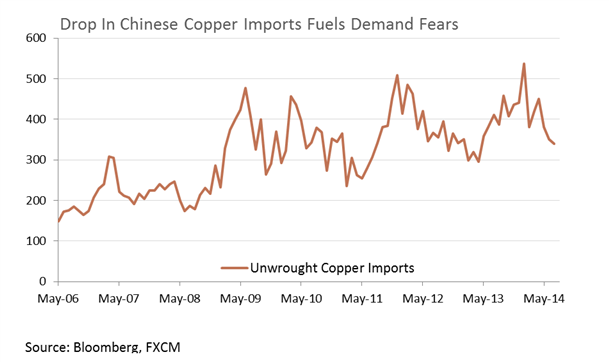 Gold and silver are treading water during the Asian session as geopolitical tensions de-escalate, diminishing safe-haven demand for the precious metals. Meanwhile, crude oil may struggle to recover lost ground as Iraqi supply disruption fears abate. Finally, copper is under pressure alongside Chinese equities today, which likely reflects demand concerns for the commodity from its largest consumer.

The flow of funds has once again returned to risk-sensitive instruments as traders look past the latest round of flare-ups in regional conflicts. This follows reports of a renewed truce between Israel and Hamas, as well as an agreement between Ukraine and Russia to deliver aid to those affected by the unrest in Eastern Europe.

Ebbing geopolitical tensions may see safe-haven demand for the precious metals sapped, which leaves gold and silver vulnerable. However, while the embers of geopolitical turmoil continue to glow the commodities may be afforded a small source of support.

Meanwhile, another void of major US economic data over the session ahead leaves gold lacking guidance from its pricing currency, the US Dollar.

As US airstrikes in Iraq persist supply disruptions from the OPEC producer appear unlikely. This may leave crude benchmarks lacking the requisite drive to sustain a medium-term recovery. However, given the magnitude of the commodity’s declines over the past several months (WTI lower by close to 10 percent since its 2014 high), traders may be hesitant to adopt new short positioning. This suggests the potential for a short-term corrective bounce should not be neglected.

Chinese Retail Sales and Industrial Production figures will be on the radar for copper traders on Wednesday. The base metal has slumped during the Asian session today alongside broad-based declines for Chinese equity indices. This may reflect some concerns over fading demand for the commodity from the Asian giant.

Unwrought copper imports from the world’s largest consumer of the commodity slid to a 15 month low in July. However, if tomorrow’s figures continue the recent trend of upside surprises to Chinese economic data, it could help alleviate demand concerns, which in turn could see some buying interest in copper renewed.

Downside risks remain for crude given the short-term downtrend remains in force (signaled by the 20 SMA and trendline). However, the climb back over the 97.50 hurdle suggests some potential for a corrective bounce over the next few sessions. A retest of the 98.90 mark (23.6% Fib) would offer a new opportunity to enter short positions, while a break higher would invalidate a bearish technical bias.

Choppy price action continues to plague gold after a failed attempt to breach the 1,319 ceiling. A pullback from the 61.8% Fib at 1,319 has yielded a Shooting Star formation which warns of a correction. A push past the 1,300 floor would set the stage for an extended decline towards 1,280.

Silver’s sideways drift over the past several sessions may give way to a break lower with indications of a short-term downtrend remaining intact. A push past what is likely weak buying support at 19.75 would pave the way for a descent to the 19.00 floor. A daily close above the descending trendline and 20.10 upside barrier would be required to invalidate a bearish technical bias.

Silver: May Resume Its Descent With Bearish Signals Intact

Copper has completed a double top formation with a break of the baseline suggesting the potential for further weakness. This puts the spotlight on the nearby 3.15 mark (50% Fib), which if broken would set the stage for a descent to 3.12. A daily close back above the 3.19 hurdle would be required to negate a bearish technical bias.

Palladium continues to demonstrate resilience with the commodity resuming its upward ascent in recent trading. An absence of bearish reversal candlestick patterns and a climb into positive territory for the ROC indicator signals the potential for further gains. Clearance of the 875 barrier would re-open the 2014 highs near 885.

Platinum has failed to clear the nearby 1,486 barrier with a pullback leaving the commodity to retest the bottom of its ascending trend channel. Given price action’s recent choppiness awaiting clearer directional signals may be preferable for playing the precious metal.