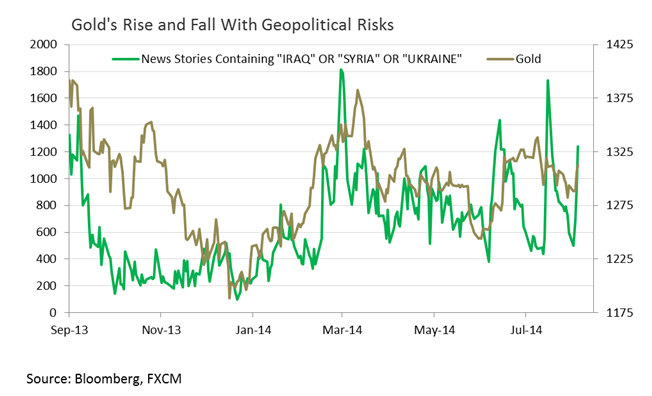 Crude oil has soared in Asian trading today with the US authorization of airstrikes in Iraq reigniting supply disruption fears. Meanwhile, mounting geopolitical concerns surrounding the Middle East and Ukraine may hold the potential to spark further safe-haven buying of the precious metals.

News of increased military intervention by the US in the Middle East has yielded a jump of close to 1 percent for crude benchmarks today (WTI: +0.73 percent, Brent: +0.91%). The reaction by oil traders suggests renewed fears over crude production impediments in Iraq, the second-largest OPEC producer.

An escalation in the ongoing unrest that has gripped Iraq could see crude prices remain elevated in the near-term. However, ultimately an increased US military presence would raise the probability of a timelier end to the conflict. This in turn would raise the chances of oil supplies flowing normally, which could see any related risk premium for crude quickly evaporate.

The precious metals have regained their luster as traders seek out the safety of the alternative assets on the back of elevated geopolitical tensions. In addition to the Iraq-related news, reports of renewed rocket launches from Gaza today have also likely weighed on investor sentiment. The latest developments suggest a breach of a recent cease fire agreement, which casts doubt over the potential for a swift a resolution to the recent turmoil.

The lingering Russia-Ukraine standoff has also likely added to investor concerns following Putin’s food import ban policy in retaliation to further sanctions from the West. Neither side appears prepared to concede at this stage, which raises uncertainty over how the saga may conclude, and is likely keeping traders on edge.

Fear and uncertainty are certainly supportive for gold and silver in the near-term (days to weeks). However, positioning built on geopolitical concerns has proven prone to a quick unravelling over recent months. This suggests the precious metals may have to turn elsewhere for a more sustainable source of strength.

Finally, an absence of major US economic data over the session ahead suggests the influence on gold from its pricing currency may be limited. Elevated fears over regional conflicts tend to see greater demand for gold than the greenback.

Downside risks remain for crude given the short-term downtrend remains in force (signaled by the 20 SMA). However, the climb back over the 97.50 hurdle suggests some potential for a corrective bounce over the short-term. A retest of the 98.90 mark (23.6% Fib) would offer a new opportunity for short positions, while a break higher would invalidate a bearish technical bias.

Gold continues its push through a congestion zone between 1,300 and 1,320. Clearance of the 61.8% Fib would suggest the potential for a run on the 1,342 ceiling, which may be achievable with reversal signals lacking.

Silver is struggling to sustain a push past the psychologically-significant 20.00 handle which casts doubt on the prospect of run higher. This suggests the recent recovery may simply be a corrective bounce, which favors short positioning. A resumption of the short-term downtrend would pave the way for a descent to the 19.00 floor.

Copper has completed a double top formation with a break of the baseline suggesting the potential for further weakness. This puts the spotlight on the nearby 3.15 mark (50% Fib), which if broken would set the stage for a descent to 3.12. A climb back above the 3.19 hurdle would be required to negate a bearish technical bias.

Palladium’s break of its long-held ascending trend channel casts a bearish light on the commodity. The retest of the trendline will help to confirm whether there is the potential for a more significant correction. A pullback would likely be met by buying support near the 836 floor.

Platinum’s push past the descending trendline on the daily shifts the immediate risk to the upside and sets up a test of the nearby 1,486 barrier. Clearance of the resistance level would put the spotlight on the 1,502 mark.