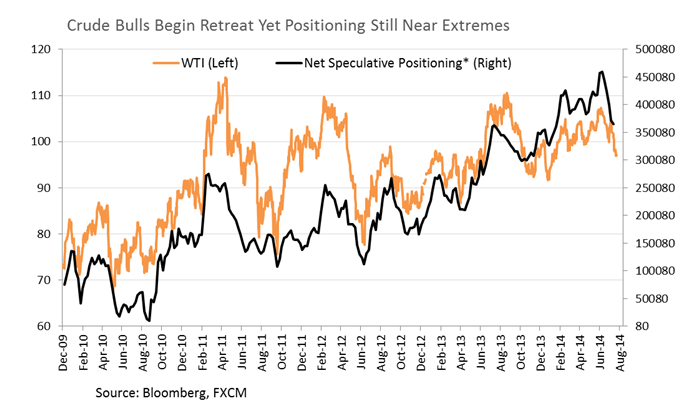 Crude oil has managed to regain its footing in Asian trading today with a light economic docket over the session ahead set to leave the commodity lacking directional guidance. Also in the energies space, natural gas may look to continue its recovery if upcoming storage data alleviates supply glut concerns. Meanwhile, gold is left in a precarious position as traders question the potential for geopolitical tensions to remain elevated, putting safe-haven demand for the metal at risk.

A bullish inventories report from the DOE proved insufficient to support crude prices with the commodity extending its recent declines on Wednesday. WTI has now suffered plunge of more than 10 percent since its June highs as the risk premium built on supply disruption fears in the Middle East evaporates.

The magnitude and pace of crude’s descent raises the question of how much further it could plummet, and whether a corrective bounce may arise. With a fears over OPEC production constraints having dissipated a sustained selloff may be lacking the requisite fundamental drive.

However, despite its recent weakness net long positioning for WTI remains near extremes. This suggests there may still be potential for declines in crude prices if traders are tempted to unravel bullish bets.

Light US Docket May Afford Gold Some Breathing Room

The precious metals have regained their shine in recent trading with palladium the standout performer today (+0.7 percent at 6:17 GMT). Elevated concerns over turmoil in Eastern Europe and the associated safe-haven demand for alternative assets are a likely source of support. However, as witnessed in recent months, fear-driven positioning is prone to being unwound at a fast pace. This in turn leaves gold and silver in a precarious position. However, an absence of major US economic data over the session ahead leaves a broad-based USD rally as questionable, which could afford gold some breathing room.

Upcoming Weekly Storage figures from the EIA are tipped to reveal a build in supplies of 83.71 bn cubic feet, a decrease from the prior reading. The energy commodity has recovered by more than 5 percent since its July lows with recent inventories figures alleviating concerns over a supply glut. Despite the latest readings remaining above the seasonal average, a weaker-than-anticipated build could help lead further gains for natural gas. 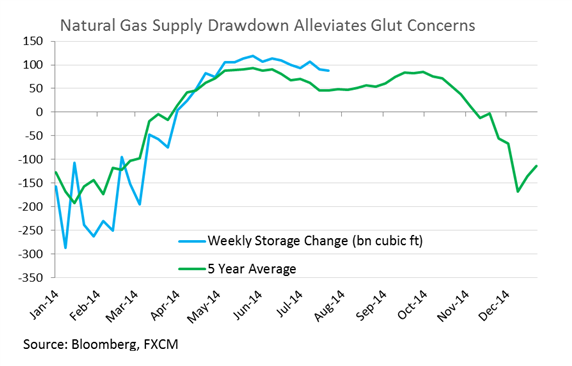 Downside risks remain for crude given the short-term downtrend remains in force (signaled by the 20 SMA). The crash through 97.50 paves the way for a descent to the February lows near 96.30 and an eventual extension to 95.00.

Gold’s recent recovery leaves the yellow metal at a crossroads. At this stage a more convincing push above the 38.2% Fib at 1,305 would be required to shift sentiment to the upside. Further gains would likely encounter selling pressure at the 1,320 handle.

Silver has managed to reclaim the psychologically-significant 20.00 handle. While the recovery has yielded a bullish reversal pattern (Piercing Line), the near-term downtrend remains to the downside. This leaves selling into bounces preferred. A retest of the descending trendline or 20.34 could see sellers re-emerge.

Copper has completed a double top formation with a break of the baseline suggesting the potential for further weakness. This puts the spotlight on the nearby 3.15 mark (50% Fib), which if broken would set the stage for a descent to 3.12. A climb back above the 3.19 hurdle would be required to negate a bearish technical bias.

Palladium’s break of its long-held ascending trend channel casts a bearish light on the commodity. The retest of the trendline in trading today will help to confirm whether there is the potential for a more significant correction. A pullback would likely be met by buying support near the 836 floor.

Platinum is at a critical juncture as it faces a retest of its descending trend line and 20 SMA. An upside breakout would open the recent highs near 1,486 while a retreat could find buying support at 1,460.

Platinum: At A Crossroads Near Trendline Resistance