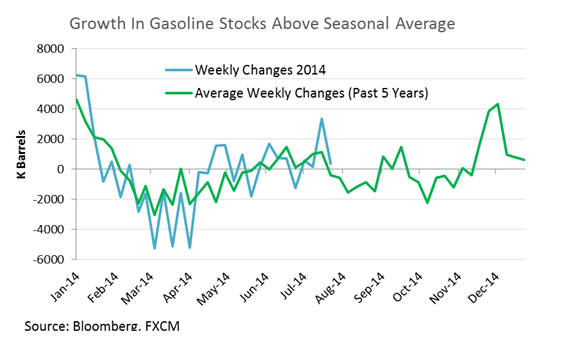 Crude oil may be set for continued turbulence with US inventories data on tap over the session ahead. Meanwhile, gold’s resilience may be threatened if the latest flare-up in geopolitical tensions fails to sustain safe-haven buying for the precious metal.

The DOE’s Weekly Petroleum Status Report set to cross the wires in the coming hours is tipped to reveal a sixth consecutive decline for total crude stocks. The last set of figures from the government agency indicated that stockpiles at Cushing, OK (the delivery point for WTI) fell to their lowest level since 2008.

While a sustained slide in oil inventories may suggest a ramp-up in demand, gasoline stockpiles tell a different story. An apparent glut in crude’s end product indicates that consumers of the commodity are unable to absorb fresh supply. Another build above the seasonal average for gasoline stocks may see some renewed selling pressure on WTI.

Safe-haven demand for gold on the back of turmoil in Eastern Europe has likely offset pressure on the yellow metal from a stronger greenback. However, the alternative asset’s siblings have not been as fortunate. Silver plunged by close to 2 percent on Wednesday, while palladium suffered its largest daily percentage decline since June (-1.17 percent).

Looking ahead a light US economic docket casts some doubt on the potential for the US Dollar to sustain its recent gains, which could ease some of the pressure on gold. However, if the latest spark in the Ukrainian saga fails to yield fire, gold may be at risk as traders unwind fear-driven positioning in the precious metals.

Downside risks remain for crude given the short-term downtrend remains in force (signaled by the 20 SMA). The corrective bounce to 98.90 was suggested as a new opportunity to look at short positions, with a target offered by the 97.50 floor. A daily close below the nearby barrier would now be required to pave the way for a drop to the February lows near 96.30

The emergence of a short-term downtrend for gold casts the immediate risk to the downside with a break of 1,280 (61.8% Fib) to open 1,258. A Piercing Line pattern near the nearby floor failed to find follow-through. This in turn casts doubt on the potential for a recovery. Sellers are likely to emerge at the 1,305 mark.

Silver has surpassed the 20.00 target offered in recent commodities reports with the risk remaining to the downside. A corrective bounce back to the psychologically-significant handle would be seen as an opportunity to enter new shorts. The spotlight is now on the 19.00 handle.

Palladium’s break of its long-held ascending trend channel casts a bearish light on the commodity. A break below the nearby 836 mark (38.2% Fib Level) would set the scene for a retreat to 805. However, room for a corrective bounce should be allowed given the extent of recent declines and proximity of nearby buying support.

Platinum may be set to extend its recent slide following a push below its ascending trend line. With a short-term downtrend intact a break below 1,443 would open the June lows near 1,424. Clearance of the 1,460 handle would be required to invalidate a bearish technical bias.