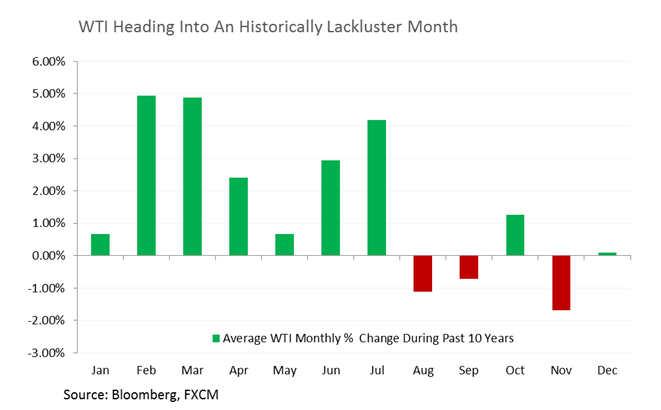 Crude oil may be afforded a corrective bounce over the session ahead following steep declines over the month of July. Meanwhile, gold could be left to consolidate following Friday’s dramatic NFP-related rally. Finally, copper’s sideways drift could find some direction with a string of top-tier Chinese economic prints set to cross the wires this week.

Crude oil is recovering some ground in Asian trading (currently higher 0.3 percent). Fundamental catalysts are absent at this stage, suggesting this is likely a corrective bounce following last week’s dramatic declines. While newswires have reported that oil fields in Northern Iraq have been seized by rebels the impact on crude prices is likely limited. The conflict remains unlikely to disrupt the bulk of the country’s crude production which is focused in the South. Additionally, the temporary shutdown of a US crude refinery is unlikely to have a material impact on the price of WTI, given its transient nature.

WTI suffered a monthly percentage decline of 6.83 percent in July, the largest since May 2012. Historically, the first 7 months of the year have each seen a positive performance for crude on average over the past 10 years. However, a seasonality study reveals the commodity is now in its second worst performing month on average.

An absence of major US economic data over the session ahead may leave the precious metals lacking directional guidance from their pricing currency, the US Dollar. This suggests gold could consolidate following its jump higher on Friday following a disappointing NFP reading.

At this stage heightened geopolitical tensions appear not to hold the sufficient ‘fear-generating’ weight required to spark safe-haven demand for alternative assets. However, tensions in the Middle East, Ukraine, as well as Eurozone / Argentine debt default contagion concerns should not be written-off completely. A material escalation would likely see the precious metals shine.

Chinese trade balance figures will be in focus for copper traders this week. A rebound in economic data from the Asian giant over recent months has helped alleviate concerns over a deceleration for economic growth. If this trend continues it could continue to keep copper elevated. 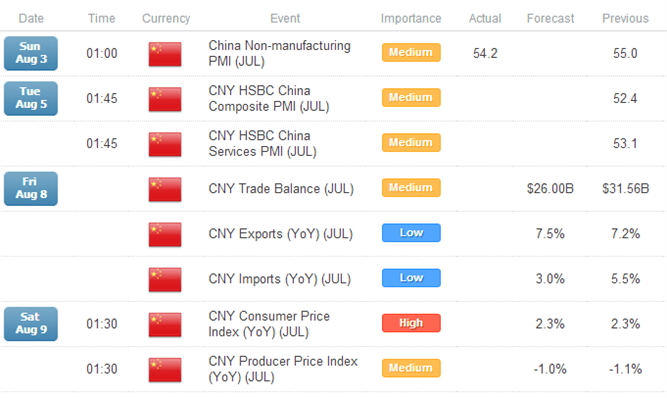 Downside risks remain for crude given the short-term downtrend remains in force (signaled by the 20 SMA). However, given the magnitude of recent declines and the close proximity of current prices to support at 97.50 a corrective bounce may be afforded. A recovery to the nearby 98.90 barrier would be seen as an opportunity to enter new short positions.

The emergence of a short-term downtrend for gold casts the immediate risk to the downside with a break of 1,280 (61.8% Fib) to open 1,258. The emergence of a Piercing Line formation suggests some buying support remains, however the pattern lacks confirmation from a successive up period. This casts doubt on the potential for an extended recovery. Sellers are likely to emerge at the 1,305 mark.

Gold: Descent To Continue In Absence Of Key Reversal Patterns

Silver’s failure to hold above the 20.43 mark (38.2% Fib Level) suggests the potential for further weakness. The risk remains for a turn lower given a downtrend has emerged for the precious metal (signaled by the 20 SMA). Buyers are likely to emerge near the psychologically-significant 20.00 handle.

Palladium’s pullback has been met by some buying support at the critical 861 mark. At this stage the medium-term uptrend remains in force, although fading momentum (signaled by the ROC) is a cause for concern.

Platinum is at a critical juncture as the precious metal threatens a break of its ascending trend channel. While evidence of a short-term downtrend exists a Doji formation indicates some hesitation by the bears. A break above the descending trendline would be required before suggesting new long positions.