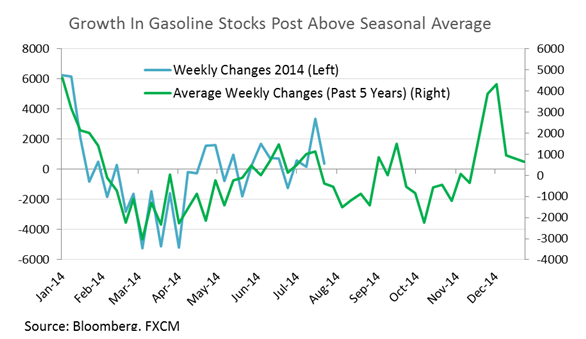 Crude oil and gold could be afforded some breathing room in the session ahead as traders await guidance from a second round of top-tier US data on Friday. Meanwhile, natural gas will be in the firing line ahead of another set of storage figures that may put the commodity under pressure. Finally, copper could resume its climb if upcoming Chinese PMI figures continue a string of recent upside surprises from the Asian giant.

Precious Metals Hold Their Breath Ahead Of NFPs

Gold and silver have managed to stay standing following round one of this week’s barrage of US event risk. A blowout US Q2 GDP reading generated a spike higher for the greenback and weakness for gold. However, the precious metal managed to recover some ground after the FOMC July Statement revealed policy makers remain concerned about ‘slack’ in the US labor market. This in turn suggests the central bank may refrain from hiking rates until broader measures of activity including wage growth pickup.

This turns the heat up for round two on Friday with the release of the July NFP figures. An unexpected drop in the headline unemployment rate or upside surprise to the jobs added reading could generate further gains for the greenback (and put pressure on gold). However, follow-through likely requires evidence of progress in the aforementioned gauges like wage growth and underemployment.

Brent suffered its largest one day percentage decline in 6 weeks (-1.12 percent) on Wednesday with similar declines witnessed for WTI. This may reflect easing Russian supply disruption fears with the West refraining from extending sanctions to the country’s oil exports at this stage. The related risk premium from such speculation has likely been unwound at this point, which suggests further declines on fading Russian supply concerns may be limited.

Additional pressure was put on the commodity on Wednesday by the DOE’s Weekly Petroleum Status Report, which revealed another build in gasoline inventories to their highest level in four months. Distillate inventories also climbed to a 10 month high. Taken together newswires have suggested this reflects less demand for crude. However, an examination of the seasonal changes for gasoline stockpiles reveals recent figures are only slightly above their 5 year average. If this trend were to continue over the coming weeks this could give the argument for lessening demand some weight, but at this stage there appears to be little cause for concern.

The release of the Weekly Natural Gas Storage Report from the EIA over the session ahead is likely putting natural gas traders on edge. The commodity has plunged by over 20 percent since its high in June on the back of a string of above-average storage builds. If the latest reading prints above the consensus estimate it could see sellers tighten their grip and put renewed pressure on the commodity.

Both the official and HSBC PMI figures due on Friday could help offer copper some guidance. A rebound in Chinese economic data witnessed over the past several months has helped alleviate concerns over a further deceleration of economic growth. If the trend of upside surprises continues it would signal a healthy appetite for base metals by the Asian giant. In turn this could help copper resume its climb.

As noted in yesterday’s commodities report the immediate risk was to the downside for WTI with prices below the 20 SMA and ROC in negative territory. Following the 99.42 mark being hit there may be room for a corrective bounce. A retest of 101.03 mark (23.6% Fib) or daily close below 98.90 would be seen as a fresh opportunity to enter new short positions.

The emergence of a short-term downtrend for gold casts the immediate risk to the downside with a break of 1,292 (50% Fib) to open 1,280. An absence of candlestick reversal signals casts doubt on a potential recovery at this point.

Gold: Descent To Continue In Absence Of Key Reversal Patterns

Silver has regained its footing at the 20.43 mark (38.2% Fib Level) after crashing through former support-turned resistance at 20.83. The risk remains for a turn lower given a downtrend has emerged for the precious metal (signaled by the 20 SMA). Buyers are likely to emerge near the psychologically-significant 20.00 handle.

Playing palladium’s uptrend remains preferred with the prospect of a run on the psychologically-significant 900 handle over the near-term still looking likely. However, a several Doji candlesticks and decline for the ROC indicator offer warnings signs that upside momentum may be fading, which will be closely monitored.

While platinum has maintained a slight upward trajectory over recent months, more recent price action has been relatively rough, which leaves a mixed technical bias for the commodity. A Piercing Line formation offers a bullish signal however a push above the 20 SMA would be required before suggesting a run on the channel top.