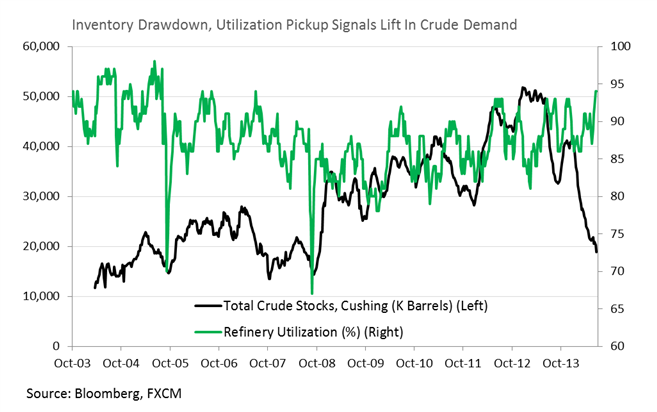 Crude oil and gold may be at risk of a pullback as traders look past geopolitical tensions in Eastern European and the Middle East. Meanwhile, natural gas may be set for another volatile session on the back of the latest round of storage data for the commodity. Finally copper could continue its climb if today’s bumper Chinese manufacturing data further alleviates concerns of a slowdown in the Asian giant.

The latest developments in Eastern Europe have proven insufficient to shift broader market sentiment as reflected by a push to record highs for the S&P 500 (a proxy for risk appetite). This may leave gold and silver lacking the requisite safe-haven demand to recover some of the ground lost over the session thus far (currently lower by half a percent). Similarly crude’s risk premium from Russian supply disruption fears may leave the Brent benchmark particularly vulnerable to a correction.

WTI gained on Wednesday following a bullish set of inventories figures from the DOE. The Weekly Petroleum Status Report reflected the fourth consecutive decline in total crude stocks, while inventories at Cushing, the delivery point for WTI, hit their lowest level since 2008. Additionally, refinery utilization remains elevated at its highest rate in close to a decade. Taken together the figures suggest that a ramp-up in demand is mopping up part of the supply glut that had built up earlier in the year. A robust US economic recovery remains the key condition required to keep crude prices elevated in the near-term.

Another higher-than-anticipated build for upcoming storage change data set to be released over the session ahead could put further pressure on natural gas prices. The commodity has plunged by more than 20 percent since its June high last month, driven lower by a series of supply builds above their seasonal average. Past releases of the storage figures have generally been met with significant volatility for natural gas as noted in the chart below. 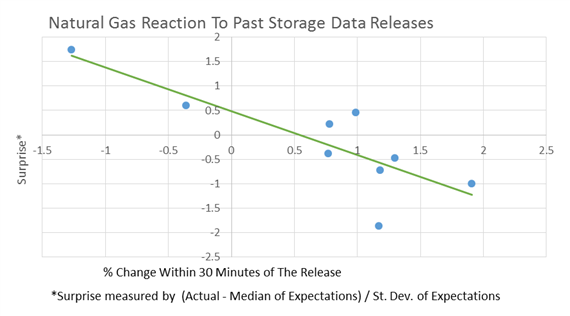 An upside surprise to the July HSBC Chinese Flash PMI data released today sent copper prices soaring (currently higher by 0.87 percent). The gauge of manufacturing sector activity in the Asian giant printed at 52, the highest level since January 2013, and remains above the 50 mark that separates expansion from contraction.

The reading for the leading indicator continues the rebound witnessed for recent Chinese economic data and likely alleviates concerns of a further growth deceleration. As the largest consumer of copper, further positive data-flow from China could help the base metal continue its climb over the near-term. 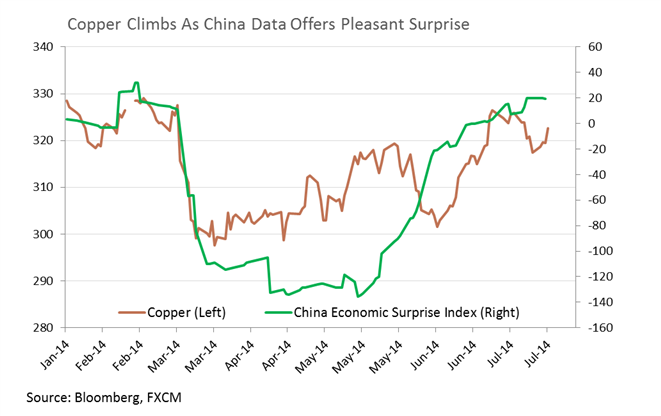 Crude’s bounce back to noteworthy resistance at 103.76 is seen as a fresh opportunity to look at short positions. The failure to breach the 23.6% Fib Level alongside an intact downtrend suggests another potential drop to the 101.36 mark.

The emergence of a short-term downtrend for gold casts the immediate risk to the downside with buyers likely to emerge at the 1,292 mark (50% Fib). An absence of candlestick reversal signals casts doubt on a potential recovery at this point.

The technical picture has not changed significantly for silver over the most recent session. The failure to hold above the critical 21.10 mark suggests the bears are unprepared to relinquish their grip on prices at this stage. A daily close back below 20.83 (23.6% Fib) would be required to shift the immediate risk to the downside.

Silver: Searching For Direction Above 20.83

Copper is teasing at break above the 3.23 mark which could shift the short-term technical outlook for the commodity. A push above the SMA and transition above the 0 level for the rate of change indicator would suggests the emergence of an uptrend and open the recent highs near 3.29. However, if the daily candle fails to close above 3.23, the immediate risk would be to the downside.

Playing palladium’s uptrend remains preferred with the prospect of a run on the psychologically-significant 900 handle over the near-term still looking likely. A retest of 861 or push back above former support-turned resistance at 875 would offer a fresh buying opportunity.

While platinum has maintained a slight upward trajectory over recent months, more recent price action has been relatively rough, which leaves a mixed technical bias for the commodity. Buyers are likely to emerge at the 1,470 mark, yet there are few indications of a potential reversal from candlesticks at this point.