Crude Oil At A Crossroads, Gold Could Remain Elevated As USD Drops

Crude oil may be set for a turbulent session with the possibility that fading supply disruption fears could be offset by a bullish US inventories report. Similarly, gold faces conflicting cues as ebbing safe-haven demand for the precious metal may be counteracted by a weaker US Dollar. Finally, copper traders will be given some guidance by upcoming Chinese PMI data which could bolster demand for the base metal on an upside surprise.

US Supply Story At A Potential Turning Point

US Inventories data set to cross the wires in the coming hours could help add some color to a shifting supply and demand story for crude oil in the US. Near-record levels for total crude stockpiles are slowly being absorbed by a pickup in refinery utilization according to recent reports from the DOE. This puts crude oil at a turning point as a robust US economic recovery stands to bolster demand for the growth-sensitive commodity.

The upcoming Weekly Petroleum Status Report is tipped to reveal the fourth straight weekly decline for total inventories, suggesting demand is set to outstrip new supply once again. Another bullish set of inventories figures could help offset some of the pressure facing crude on the back of easing Russian supply concerns.

Meanwhile an above-average build in natural gas storage data over the past several weeks has contributed to sustained declines for the energy commodity. Another higher-than-anticipated print from the EIA’s Weekly Report on Thursday could put further pressure on prices, which have plunged by over 20 percent since their June highs.

The latest flare-up in geopolitical tensions have failed to leave a lasting impact on market sentiment, leaving the precious metals vulnerable to ebbing safe-haven demand. However, gold and silver could remain elevated if their pricing currency, the US Dollar continues its struggle. The June US inflation reading released this week does little to alter Fed policy expectations, which may leave the US Dollar bulls lacking drive. Further, a light US docket over the session offers few potential catalysts to spark renewed faith in the reserve currency.

A better-than-anticipated reading from the upcoming China June HSBC Flash PMI figures could help alleviate concerns over a slowdown in economic growth in the Asian giant, which in turn could prop up copper prices. A turnaround in recent data from the world’s largest consumer of the base metal has helped the commodity recover some ground over the past several months. 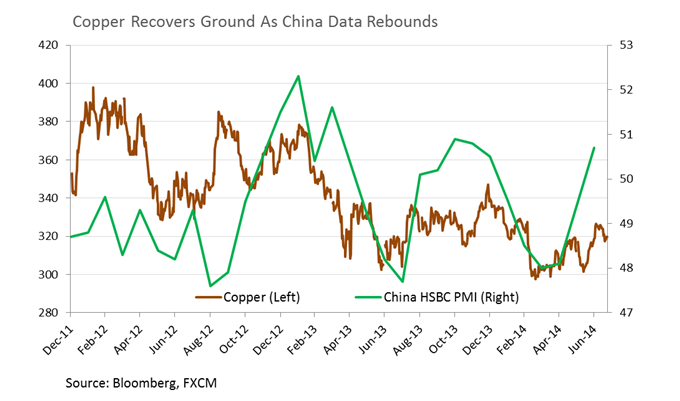 The risk remains to the downside for crude following a failure to push back above the 23.6% Fib Level at 103.76. The short-term downtrend as signaled by the 20 SMA is intact, which puts the immediate focus on the 101.36 mark. A break below the 38.2% Fib would pave the way for a retest of the 98.90 mark.

The technical picture has not changed significantly for silver over the most recent session. The failure to hold above the critical 21.10 mark suggests the bears are unprepared to relinquish their grip on prices at this stage. A break back below 20.83 (23.6% Fib) would be required to shift the immediate risk to the downside.

Silver: Searching For Direction Above 20.83

Copper has failed to breach the 3.23 level of resistance in recent trading, which casts doubt over the potential for a sustained recovery. Given the emergence of a short-term downtrend a re-test of the nearby ceiling, or break below 3.19 would be seen as a new opportunity for short positions.

Playing palladium’s uptrend remains preferred with the prospect of a run on the psychologically-significant 900 handle over the near-term still looking likely. A retest of 861 or push back above former support-turned resistance at 875 would offer a fresh buying opportunity.