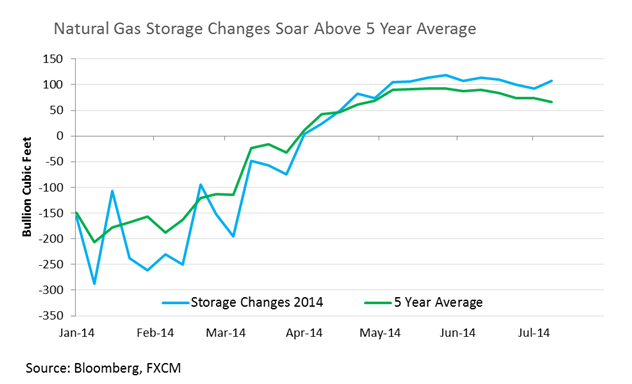 Gold and Crude Vulnerable As Traders Look Past Geopolitical Tensions

Crude oil and gold may be in store for another turbulent week as investors assess the potential for the latest flare-up in regional conflicts to escalate. Of further note, precious metals traders could overlook this week’s US inflation data given the limited impact on shaping Fed policy expectations at this point. Finally, natural gas may face further selling pressure as traders continue to unwind long positions on expectations for above average storage builds.

Commodities Set For Swings As Geopolitical Tensions Take The Reigns

Gold and silver are teetering near noteworthy support levels in Asian trading today following plunges of more than half a percent for the commodities on Friday. Traders are seemingly looking past the latest developments in Eastern Europe and discounting the possibility of an escalation, which has put pressure on the alternative assets. Additionally, fading concerns over supply disruptions of crude oil from Russia, who accounts for roughly a third of Western Europe’s oil imports, helps explain Friday’s sharp declines for the Brent Benchmark.

While inherently difficult to predict; if the tensions in the Middle East and Ukraine were to abate, it could lead to a further unwinding of fear-driven positioning in gold and silver. Further, the possibility that Europe would cut off its largest energy supplier by enacting commodity export sanctions on Russia remains unlikely, which puts crude oil in a precarious position.

Traders To Look Past US Inflation Data

US CPI data due over the week ahead may have a limited impact on the price of gold price barring a significant deviation from expectations. Given recent rhetoric from Fed officials it appears unlikely at this stage that the FOMC would deviate from current policy preferences unless inflation were to pick up substantially. Additionally, the central bank prefers to reference a separate gauge of price increases (Core PCE) for formulating policy. Further, demand for gold as an inflation-hedge may offset some of the pressure from a stronger US Dollar.

Anticipation over further storage builds in excess of seasonal averages could continue to put pressure on natural gas prices. The energy commodity is off to a rough start this week (currently lower by close to 2 percent for the session) with prices hitting their lowest level since November 2013. This puts the total decline since the June highs at more than 18 percent.

As noted in Friday’s report crude’s test of the 23.6% Fib Level at 103.76 offered a fresh opportunity for new short positions. With signs of the downtrend intact, a break below 101.36 would pave the way for a test of the monthly lows near 98.90.

Silver has failed to hold above the critical 21.10 mark suggesting the bears are unprepared to relinquish their grip on prices at this stage. A break back below 20.83 (23.6% Fib) would be required to shift the immediate risk to the downside.

As noted in recent reports; copper’s breach of its ascending trendline and support at 3.23 paved the way for further weakness. With bullish reversal patterns absent, a break below 3.19 (the 38.2% Fib Retracement Level) would set the stage for a drop to 3.10.

Playing palladium’s uptrend remains preferred with the prospect of a run on the psychologically-significant 900 handle over the near-term still looking likely. A daily close back below the 875 support level would shift the short-term risk to the downside.