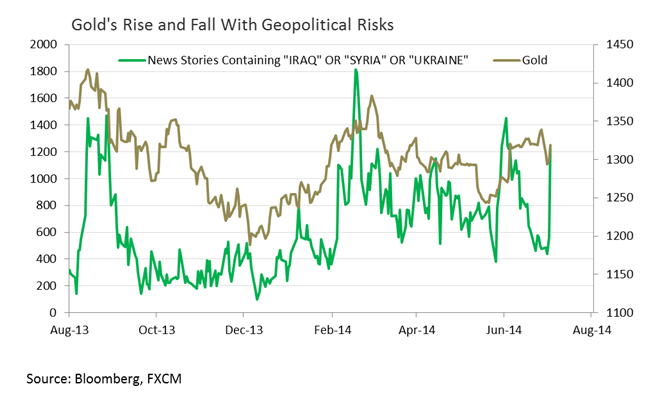 Gold and crude oil could be set for further volatility as heightened geopolitical tensions take the reigns with respect to the direction of the commodities. The flare-up in regional conflicts over the past 24 hours has yielded a dramatic response from WTI and the precious metals. However, without the requisite shifts in the underlying fundamentals, the potential for follow-through may be limited.

Gold is giving back some of its recent gains in late Asian trading (currently lower by more than half a percent). The precious metal surged by more than 1 percent on Thursday as reports of a downed commercial flight in a disputed Ukrainian territory flooded newswires and bolstered safe-haven demand for the alternative asset. Uncertainty over the cause of the crash, given its proximity to a hotspot of regional unrest, has prompted an international response that may stand to deepen the divide in Eastern Europe.

If the situation were to escalate further the precious metals could benefit from investors seeking the yellow metal as a safe-haven. However, as has been witnessed during recent bouts of geopolitical tensions, the initial shock reaction often finds little follow-through. This could leave gold and silver vulnerable to a correction as traders reassess the situation, and possibly unwind some of their fear-driven positioning in the precious metals. Similarly, the prospect of sanctions on Russian commodity exports remains unlikely at this stage, suggesting some of the gains for crude based on supply disruption fears may be unfounded.

Natural gas prices are edging lower during the Asian session after a higher-than-anticipated rise in storage figures sent the commodity tumbling on Thursday. The US Energy Information Administration revealed supplies rose by 107 billion cubic feet for the week, beating the consensus estimate of only 98.7 billion cubic feet. Prices have now plunged by close to 17 percent since their June high.

Total storage figures remain well-below their 10 year average for the same period following a sharp drawdown over the harsh winter months in the US. However, a continued pick-up in the pace of storage injections alongside expectations for weaker demand over the coming months could alleviate any concerns of a supply shortage, which in turn could put further pressure on prices.

Crude’s ascent has stalled at the 23.6% Fib Level at 103.76 which coincides with a retest of the ascending trendline on the daily. Given the proximity to these areas of likely selling pressure, the corrective bounce offers new entries for short positions. Buyers are likely to re-emerge at the 101.30 mark.

Silver has failed to crack the critical 21.10 mark suggesting the bears are unprepared to relinquish their grip on prices at this stage. A break back below 20.83 (23.6% Fib) would be required to shift the immediate risk to the downside.

Copper’s breach of its ascending trendline and support at 3.23 paves the way for further weakness ahead. While there are few signs of bullish reversal patterns at this point buyers may look to slow the base metal’s descent at 3.19.

Playing palladium’s uptrend remains preferred with the prospect of a run on the psychologically-significant 900 handle over the near-term still likely. A pullback to the most recent breakout point at 875 would be preferred for new long entry opportunities.

While platinum has maintained a slight upward trajectory over recent months, more recent price action has been relatively rough. This leaves a mixed technical bias for the commodity.