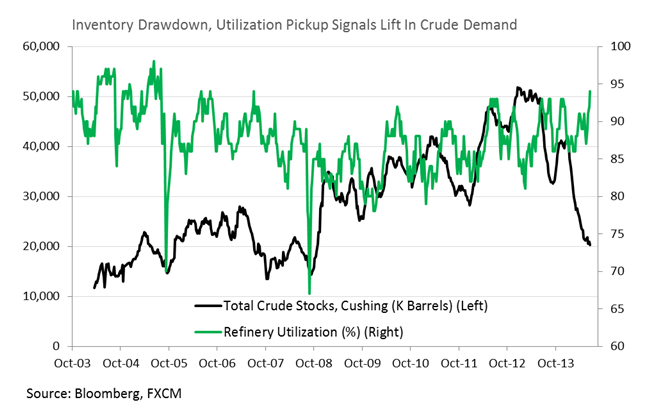 Crude oil is treading water during the Asian session with a light US economic docket ahead offering little to inspire a further recovery for the commodity. Meanwhile, gold and silver continue their recovery as the latest flare-up in geopolitical tensions likely draws safe-haven demand for the precious metals.

The ongoing Ukrainian unrest has regained attention this week following reports from US officials suggesting Russia has supplied insurgents with weapons in Eastern Ukraine. The failure to comply with requests to assist a de-escalation of the conflict has prompted the EU and US to enact another round of sanctions on Russia. This time targeting some of the country’s largest state-owned enterprises.

The prospect of sanctions on some of Russia’s key commodity exports is noteworthy, given the nation is the world’s largest energy exporter, as well as the largest supplier of palladium. However, at this stage it seems unlikely that Europe would cut off its largest supplier, yet speculation alone over potential disruptions could act as a source of short-term support for crude and natural gas, as well as palladium.

Similarly, a flare-up in tensions between Israel and Hamas over the past two days has likely bolstered safe-haven demand for the precious metals. After a suffering a steep sell-off earlier in the week, gold and silver have recovered roughly half a percent thus far in Asian trading. If the conflict between the two forces were to escalate, the precious metals could be afforded further gains.

Crude Bounces Back As Inventories Drop

Following several weeks of a narrow focus by crude traders on the prospect of Middle East supply disruptions, traders may have turned their gaze back to the US. The DOE’s Weekly Petroleum Status report released on Wednesday painted a bullish picture of the US oil market. Most notably; stockpiles at Cushing, the delivery point for WTI, dropped to their lowest since 2008. Additionally, refinery utilization picked up to the highest rate since 2005. Taken together the report suggests strengthening demand for crude oil in the world’s largest consumer of the commodity.

A light US docket ahead leaves few cues for crude traders, which in turn may do little to inspire a further recovery. This leaves WTI in a slightly precarious position, where traders may utilize the bounce as an opportunity to exit long positions (which remain near record highs). However, over the near term if incoming US economic data continues to improve, speculation over burgeoning demand for crude could help lead WTI higher.

The Chinese National Bureau of Statistics revealed this week that China’s economic growth in the second quarter accelerated at a pace of 7.5 percent, beating economists’ expectations for 7.4 percent. However, the better-than-anticipated reading has failed to reinvigorate the copper bulls. The base metal continues its slide in Asian trading today, after suffering a loss of over 1 percent on Wednesday. Similar negative sentiment has been shared by Chinese equities, with the Shanghai Composite down by more than half a percent today. The bearish assessment of the GDP read, may reflect concerns over an over-reliance on credit growth in the Asian giant to put the economy on track to meet policy maker’s targets. 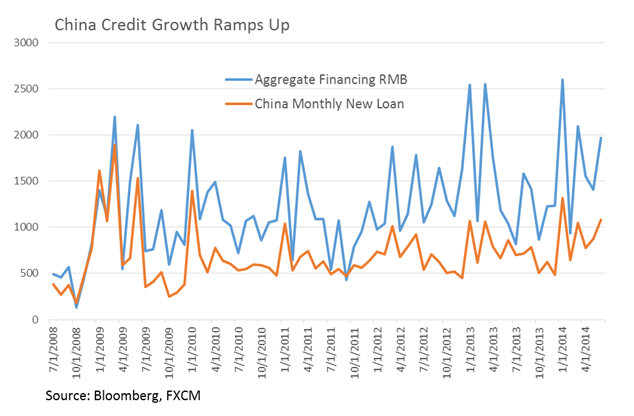 After hitting the downside target of 98.90 a Bullish Engulfing pattern on the daily threatens at a reversal for WTI. However, the pattern awaits confirmation from a second successive up-day before being validated. With the downtrend still intact (signaled by the 20 SMA), selling into rallies would be preferred.

With evidence of a downtrend in play, gold’s bounce off the 50% Fib Level is seen as an opportunity to look at new short positions. However, with a Harami pattern warning of a possible bullish reversal, a push above the 38.2% Fib Retracement Level at 1,305 could invalidate a bearish bias.

In a similar fashion to its bigger brother gold, silver’s collapse warns of further weakness to come. The break below the 23.6% Fib Retracement Level at 20.83 has confirmed the Evening Star candlestick formation and opens a push to support at 20.40.

Copper’s breach of its ascending trendline and support at 3.23 paves the way for further weakness ahead. While there are few signs of bullish reversal patterns at this point buyers may look to slow the base metal’s descent at 3.19.

As suggested in recent commodities reports, palladium’s pullback was seen as a fresh buying opportunity. Playing the uptrend remains preferred with the prospect of a run on the psychologically-significant 900 handle over the near-term.

The platinum bulls appear unprepared to relinquish their grip on prices at this point. A Morning Star formation suggests a possible push higher. However, with prices only marginally above 1,490, confirmation from a successive up-day would be required to signal the possibility of a run on 1,518.