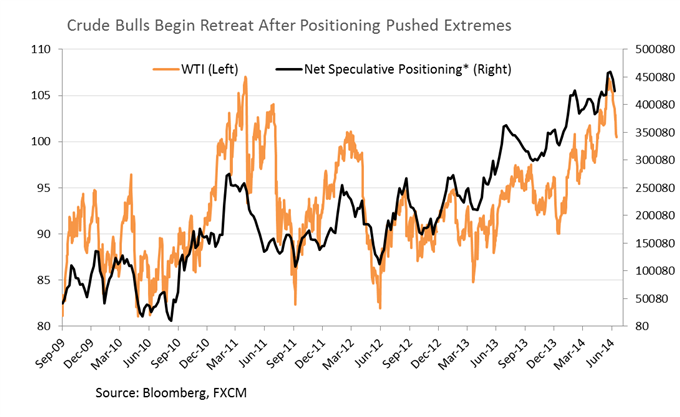 Gold and silver are at a critical juncture at the outset of the week with the precious metals testing key technical levels ahead of a busy docket for the US Dollar. Meanwhile, WTI is holding steady with a string of US data prints over the week ahead likely to offer the commodity some guidance.

Gold Traders Taking Stock Ahead of Heavy US Docket

Gold is edging lower in Asian trading as investors likely reposition themselves ahead of several noteworthy pieces of event risk for its pricing currency, the USD, over the remainder of the week. Headlining the calendar will be the Semi-Annual Testimony from Fed Chief Janet Yellen. As noted in Friday’s commodities report, the greenback has been unimpressed by recent guarded comments by Fed officials on the prospect of rate hikes. If we hear a similar tone and see an absence of hawkish guidance from Dr. Yellen the greenback could continue to struggle, which in turn may afford gold and silver some breathing room.

Reports of renewed unrest in Israel and the Gaza Strip will also be on traders’ radars. The alternative assets tend to perform well during periods of heightened geopolitical tension, meaning should the situation escalate it could offer a source of support to the precious metals. Additionally, while the Portuguese debt debacle has faded from headlines, some embers may remain, which if sparked could yield additional demand for the yellow metal. More on the outlook for gold over the week ahead here.

Crude oil benchmarks have managed to hold their ground during the Asian session thus far. This follows a relentless sell-off during the Euro and US sessions on Friday, which saw WTI suffer its largest one day percentage decline (-2.04 percent) since March.

The easing of supply disruption fears from the Middle East are a likely contributor to the precipitous drop. However, with fresh news-flow from the region slowing, the prospect of a sustained sell-off on fading production concerns alone is questionable. At the same time, long positions as reported by the CFTC remain near extremes which leaves the commodity vulnerable to weakness should the right catalyst emerge.

An absence of major oil-impacting news flow from the Middle East may leave the commodity to takes its cues from upcoming US data this week via its implications for the demand side of the equation. Advance Retail Sales, Industrial Production and Consumer Confidence figures as leading indicators for the state of the US economy will be of particular note. Upside surprises to the key pieces of data could help signal a strong economic recovery following a dismal first quarter, which in turn would bode well for crude oil. Full details and times are available on the economic calendar here.

As suggested in last week’s commodities report the retest of the ascending trendline on the daily offered a new entry for short positions for WTI. With a break below 101.30, signs of a downtrend, as well as the nullification of the Piercing Line pattern, the downside remains preferred. The next definitive support rests at 98.90, however expect some buyers to slow the descent at the psychologically-significant 100.00 handle.

The gold bulls’ resolve is being tested in Asian trading with the commodity pulling back to its breakout point at 1,330. At this stage the slight correction is seen as a buying opportunity given the uptrend remains in force. A target is offered by the 2014 high near 1,392.

In a similar fashion to its bigger brother gold, silver’s retreat in Asian trading may offer new entries for long positions. However, some caution may be warranted given the Rate of Change indicator signals fading upside momentum for the precious metal. Additionally, a break below the ascending trendline on the daily would suggest a potential shift in sentiment.

Silver: Pulling Back To Trendline Support

Copper is at a crossroads as the base metal consolidates between its ascending trendline on the daily and key resistance at 3.29. With the uptrend in force a breakout would offer new long opportunities with a target offered by 3.36.

Copper: At A Critical Juncture As Prices Consolidate

With an uptrend still in force for palladium, longs remain preferred. However, with such close proximity to resistance at 875 a pullback to support at 861 may offer more favorable entries.

Sellers remain prepared to cap gains for platinum at the 1,518, mark which suggests new entries for longs may be better served on a breakout or retreat to 1,489. A daily close below support would negate a bullish bias and suggest a drop to the former range-bottom at 1,424.