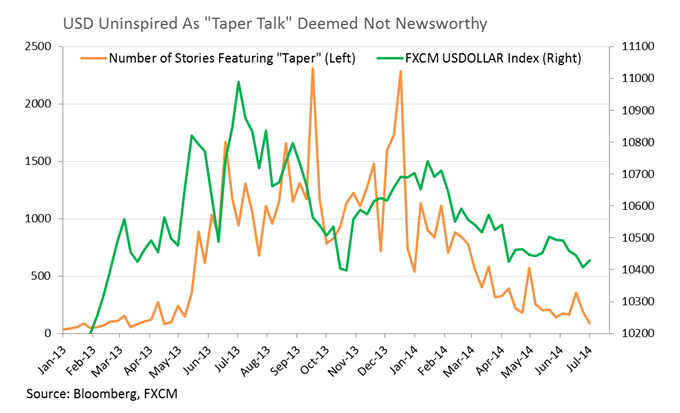 Gold and Silver Surge On Safe-Haven Demand, Crude Looks To US Data

Gold and silver have pushed higher in recent trading which is likely attributable to safe-haven demand on the back of fresh concerns of debt defaults in the Eurozone periphery. Meanwhile, crude oil traders may turn their gaze back to the US for guidance over the week ahead as supply disruption fears in the Middle East evaporate.

Fears over systemic risks posed by Portugal’s largest bank suffering “material difficulties” has likely bolstered safe-haven demand for gold and silver over the past 24 hours. The story which broke on Thursday has dominated financial media headlines and has been cited as the catalyst behind a selloff in European equity benchmarks and a drive to US Treasuries.

However, the potential for a spillover that endangers the broader financial system remains questionable at this point. This leaves gold and silver in a precarious position and potentially lacking the thrust to continue a drive higher from the Portuguese situation alone.

Looking to the week ahead the direction of the US Dollar may offer some guidance to the precious metals. This puts testimony from Fed Chief Janet Yellen in the spotlight. As noted in recent commodities reports, the greenback needs to hear a more aggressive tone from Fed officials on the prospect of an eventual rate hike to sustain a recovery. In the absence of more hawkish guidance from Dr. Yellen the reserve currency may remain unimpressed, which in turn could leave gold and silver elevated.

As suggested in yesterday's report, crude oil was looking due for a corrective bounce following the collapse witnessed over the past month. Both Brent and WTI are now trading below their pre-Iraqi crisis levels indicating less potential for a retreat, given the premium built on the back of the conflict has likely been eroded. Additional pressure on the crude benchmarks may have stemmed from the prospect of increased Libyan supply. This follows reports from newswires last week that two of the country’s key oil export terminals were returned to the government by rebels.

With oil-impacting news flow from the Middle East likely to slow over the coming week, crude may have to look elsewhere for cues. This may put the supply and demand picture in the US (the world’s largest consumer of the commodity) back in focus.

US production of crude oil hit its highest rate since 1986 this month. Alongside near-record highs for total stockpiles, supplies appear abundant. This suggests a sustained recovery for WTI rests on a firming growth outlook for the US and speculation for higher demand. US Advance Retail Sales, Industrial Production Data and Consumer Confidence figures set to cross the wires next week could offer guidance in this respect (see economic calendar for times and expectations). Upside surprises to the leading indicators for the health of the US economy would likely act as a source of support for WTI. 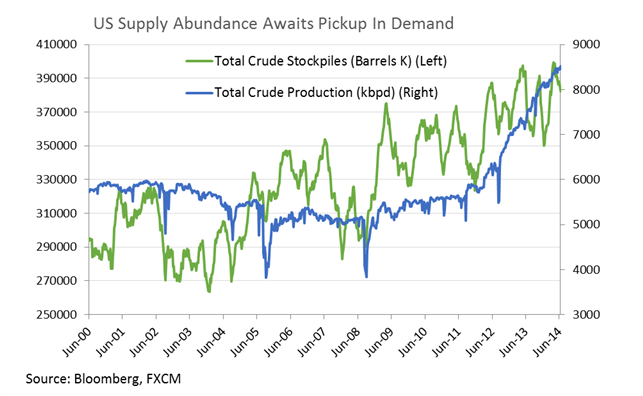 As noted in yesterday's commodities report, new shorts for WTI would be better served on a corrective bounce. Indeed an extreme reading for Consecutive Bars coupled with the close proximity to support at 101.30 afforded the commodity a slight recovery and Piercing Line pattern. A retest of the ascending trendline would be seen as a new selling opportunity.

Crude Oil: Looking For New Shorts On Retest of Trendline

Gold has edged out a daily close above 1,330 suggesting the bulls are in control of prices. A more convincing break would help offer stronger conviction behind new long positions. Nonetheless, as long as the short-term uptrend remains intact a push higher is likely. A target is offered by the 2014 high near 1,392.

Gold: Showing Signs Of Strength On Probe Above 1,330

Silver has staged a clear upside breakout above 21.10 following a test of its ascending trendline on the daily. The precious metal appears primted for a push towards the next definitive resistance level at 21.66.

Copper is at a crossroads as the base metal consolidates between its ascending trendline on the daily and key resistance at 3.29. With the uptrend in force a breakout would offer new long opportunities with a target offered by 3.36.

Copper: At A Critical Juncture As Prices Consolidate

Palladium’s pullback to its original breakout point at 861 is seen as an opportunity to enter new long positions given the uptrend for the precious metal remains in effect. Recent levels have not been witnessed since 2001, which leaves us to defer to psychologically-significant levels such as 900 for potential upside targets.

As noted in recent commodities reports platinum’s pullback to its original breakout point at 1,489 offered a new opportunity to enter long positions for the precious metal. With indications of an uptrend intact (signaled by the 20 SMA) a run on the Sep 2013 high near 1,538 may be achievable. A daily close below support would negate a bullish bias and suggest a retreat to the former range-bottom at 1,424.