Crude oil continues to suffer as production concerns in the Middle East ebb alongside a lackluster US inventories report. Meanwhile, a light US economic docket over the remainder of the week leaves gold and silver in a precarious position near key technical levels of resistance. Finally, copper may fail to resume its climb with an absence of major Chinese data-flow until next week, which follows a disappointing set of trade figures from the Asian giant today.

WTI is heading for its 10th straight day of declines (its longest stretch of falls on record) as traders likely unwind fear-driven positioning that had been built on the back of supply concerns in the Middle East. Similarly, the Brent benchmark has suffered a precipitous drop of more than 6 percent after hitting a peak of just above $115 a barrel last month.

While the fighting in Northern Iraq continues, the country’s crude oil production concentrated in the south remains unaffected Additionally, Libyan exports look set to be restored to more normal levels following the return of two of the country’s key export terminals to the government last week. While both developments alleviate supply concerns, further declines for crude oil are questionable in light of the extent of recent falls. Certainly the fact that both WTI and Brent are below their pre-Iraqi crisis levels warrants some caution when looking at new shorts.

Also in the energies space natural gas has slipped to its lowest level since January ahead of the Energy Information Administration’s Weekly Storage Report. Stockpiles are tipped to build by 91 billion cubic ft. for the week according to the median estimate from economists (see economic calendar for times). This would mark the lowest reading since the first week of May.

Total storage figures remain well-below their 10 year average, which suggests supplies are not in abundance and casts doubt over the potential for additional declines for the commodity. 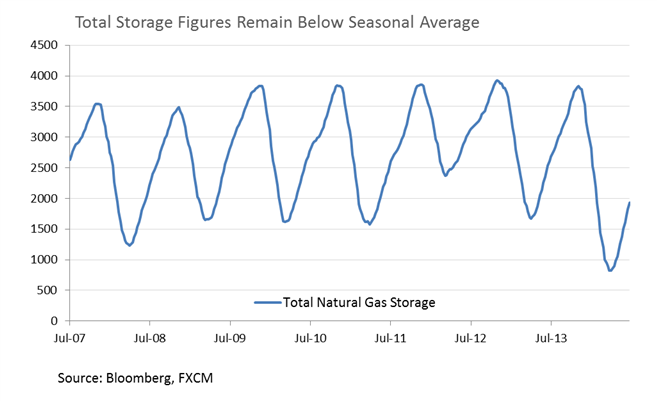 As suggested in yesterday’s commodities report a reticent tone on the prospect of an eventual rate hike in the FOMC Minutes would likely leave gold and silver elevated. Additional support for the alternative assets may stem from safe-haven demand as newswires report on a series of attacks in the Gaza Strip.

Looking ahead, an absence of major US economic data over the session ahead may leave the precious metals lacking catalysts to spark a breakout. This leaves gold in a precarious position near a key technical level of resistance. However, in the absence of a recovery by the greenback a correction for gold and silver is questionable.

A disappointing set of Chinese trade balance figures have failed to inspire the copper bulls with the base metal relatively flat in Asian trading. Exports for the month of June rose to 7.2 percent from 7.0 percent in May, which fell short of economists’ expectations for a 10.4 percent rise. With fresh economic data from the Asian giant not due until next week (see economic calendar), copper may be left lacking the impetus to spark a push higher.

As noted in recent commodities reports WTI faced a pivotal moment on its test of the ascending trendline on the daily. A break lower saw a collapse to support near 101.30. Given the close proximity to support alongside an extreme Consecutive Bars reading, new shorts may be better-served on a corrective bounce.

Gold is facing a make-or-break moment as the precious metal teases at a break above its range-top at 1,330 after bouncing off trendline support. A daily close above the key resistance level coupled with signs of an uptrend (suggested by the 20 SMA and the ROC), would open the 2014 high near 1,392.

Gold: Make-Or-Break Moment In Session Ahead

Similarly to its bigger brother gold, silver is left at a critical juncture as prices consolidate between trendline support and resistance at 21.10. An upside breakout coupled with signals of an uptrend could help propel the precious metal to 21.66.

Silver: At A Crossroads Near Key Resistance

Several Dojis on the daily signal hesitation by the copper bulls following a failed attempt to breach the Feb 2014 high near 3.29. However, the candlestick signals may be insufficient to yield a change in the short-term trend, which remains to the upside. Buyers will likely look to step in and support prices on tests of the ascending trendline on the daily.

Palladium has cleared the critical 861 handle which paves the way for further gains for the precious metal over the near-term. However, traders should be wary of a potential short-term pullback given the extreme reading for Consecutive Bars, which suggests the push higher may be slightly overextended. Current levels have not been witnessed since 2001, which leaves us to defer to psychologically-significant levels such as 900 for potential upside targets.

As noted in recent commodities reports platinum’s pullback to its original breakout point at 1,489 offered a new opportunity to enter long positions for the precious metal. With indications of an uptrend intact (signaled by the 20 SMA) a run on the Sep 2013 high near 1,538 may be achievable. A daily close below support would negate a bullish bias and suggest a retreat to the former range-bottom at 1,424.