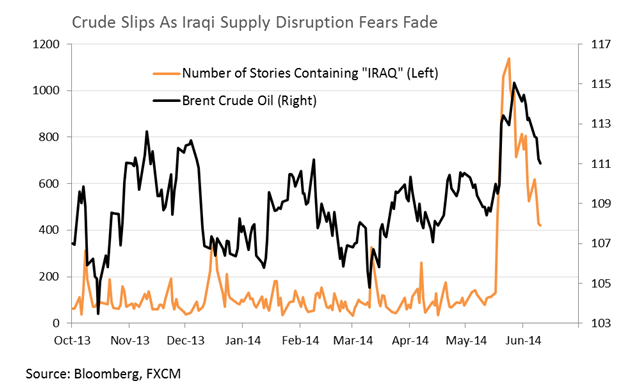 WTI At A Crossroads Ahead of Inventories, Gold Looks To FOMC Minutes

Crude oil faces a make-or-break session as the commodity trades near a technical level of support ahead of US inventories data. Meanwhile, gold and silver will be offered some directional cues via the US Dollar side of the equation on the release of the FOMC June Meeting Minutes. Finally, copper could resume its upward climb if upcoming Chinese trade figures continue a string of upside surprises to data from the Asian giant witnessed over the past month.

Ebbing supply disruption fears in Iraq and Libya continue to weigh on crude prices. Brent oil suffered its largest percentage decline since April yesterday, with the benchmark having now plunged by more than 5 percent after hitting a high of $115.68 per barrel last month. With much of the risk premium based on the conflict in Iraq having now eroded, the extent of further falls may be limited.

WTI’s decline has been less pronounced, which may reflect some hesitation from traders to push the benchmark lower ahead of US inventories figures due in the session ahead. The Weekly Petroleum Status Report from the Department of Energy is tipped to reveal a drawdown in total crude stocks of 2.5M barrels, while refinery utilization is expected to tick up by 0.14 percentn (see economic calendar).

This follows a bullish report from the DOE last week that revealed declines in both total inventories as well as stocks at Cushing, OK (the delivery point for WTI). If this emerging trend of falling supply and rising demand continues, it could help offset some of the downward pressure facing WTI on waning production concerns from the Middle East.

Gold and Silver To Take Cues From FOMC Meeting Minutes

The precious metals are likely to find some guidance from their pricing currency, the US Dollar, over the session ahead. With a steady ‘tapering’ likely priced in at this point, traders will be scrutinizing the June FOMC Meeting minutes for hints at the timing of an eventual rate hike from the central bank. Based on recent comments by Fed officials the communiqué may fail to offer the spark needed to reinvigorate the greenback. A further slump for the USD would likely leave gold and silver to remain elevated. 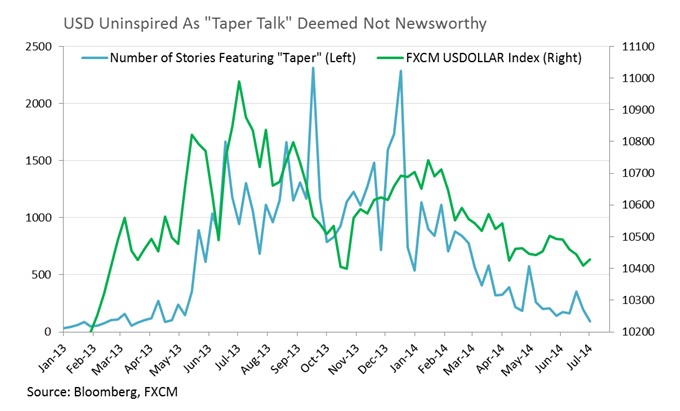 Elsewhere in the precious metals space palladium continues to soar with the commodity set for its 12th consecutive day of gains. Lingering supply disruption fears following the South African mining workers strike alongside strong demand from automakers may be helping to lift prices. However, additional support for the metal may be stemming from investors seeking diversification, as reflected by record ETF holdings. This comes as traders question the prospect of further gains for US equity benchmarks as well as relatively unappealing yields on fixed income securities. 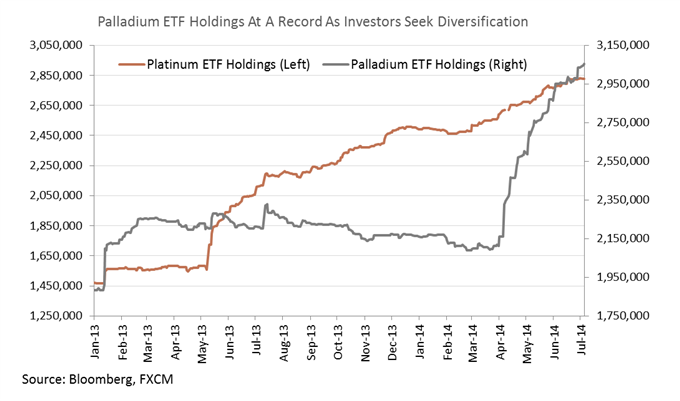 Copper remains relatively unchanged for the week as investors await guidance from Chinese trade data due on Thursday. Chinese copper imports have slumped after hitting record highs earlier in the year. However, present levels still indicate robust demand from the world’s largest consumer of the base metal. If the trade figures continue the trend of recent upside surprises to economic data from the Asian giant, it could help copper resume its climb.

Prior and expected readings are available on the economic calendar here. 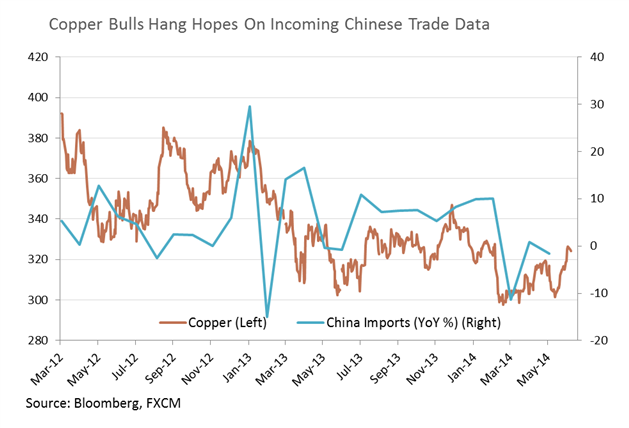 WTI faces a make-or-break moment this week as the commodity drifts towards its ascending trendline on the daily. A break lower alongside signs of downtrend (made evident by the 20 SMA and ROC indicators) would pave the way for retreat to 101.30. However, with an extreme Consecutive Bars reading, the commodity’s retreat looks somewhat overextended, which could yield a short-term corrective bounce. 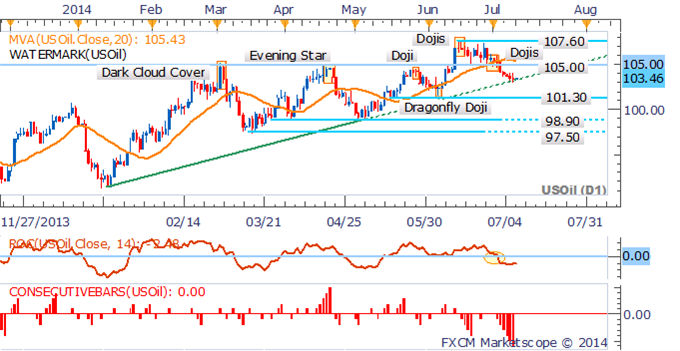 Gold continues to offer range-trading opportunities between 1,310 and 1,330. Several Doji candlesticks suggest indecision from traders between the two levels, however, the absence of a key reversal pattern casts doubt over the potential for a correction. While the 20 SMA suggest an intact uptrend, the ROC reflects waning upside momentum which suggests a degree of caution is required when looking to play the long-side. 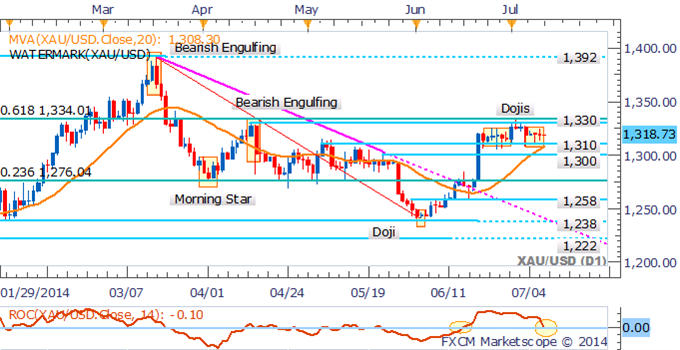 Similarly to gold, silver continues to present short-term range-trading opportunities as the precious metal consolidates between 20.80 and 21.10. While upside momentum appears to be fading (ROC), the 20 SMA signals an uptrend is still in force. 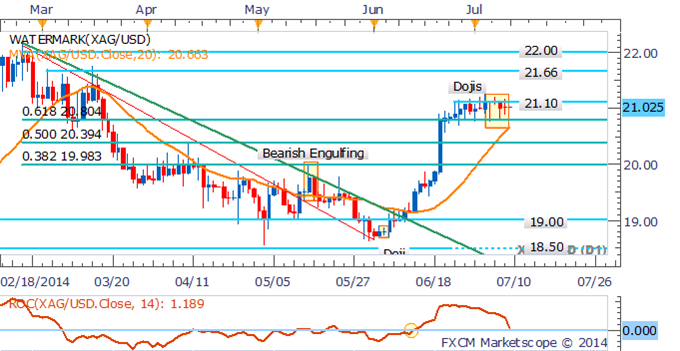 A Doji on the daily signals hesitation by the copper bulls following a failed attempt to breach the Feb 2014 high near 3.29. However, the candlestick signal may be insufficient to signal a change in the short-term trend, which remains to the upside. Buyers will likely look to step in and support prices on tests of the ascending trendline on the daily. 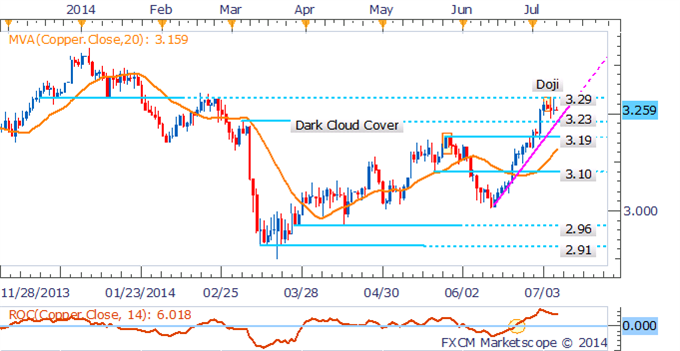 Palladium has cleared the critical 861 handle which paves the way for further gains for the precious metal over the near-term. However, traders should be wary of a potential short-term pullback given the extreme reading for Consecutive Bars, which suggests the push higher may be slightly overextended. Current levels have not been witnessed since 2001, which leaves us to defer to psychologically-significant levels such as 900 for potential upside targets. 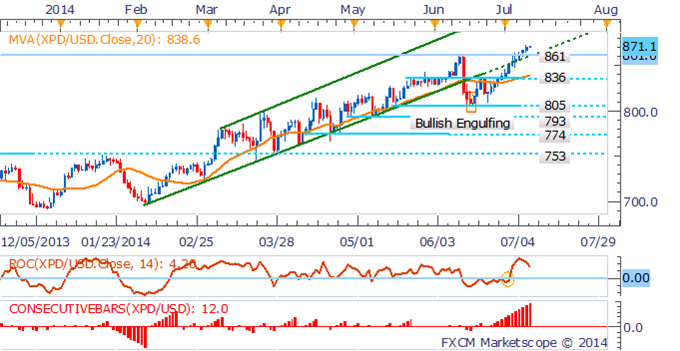 Platinum’s pullback to its original breakout point at 1,489 is seen as a new opportunity to enter long positions for the precious metal. With indications of an uptrend intact (signaled by the 20 SMA) a run on the Sep 2013 high near 1,538 may be achievable. A daily close below support would negate a bullish bias and suggest a retreat to the former range-bottom at 1,424. 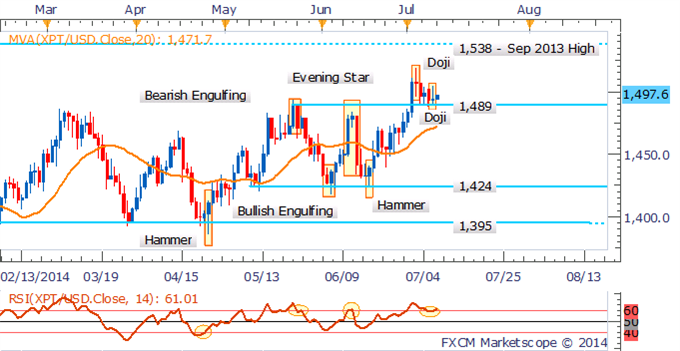