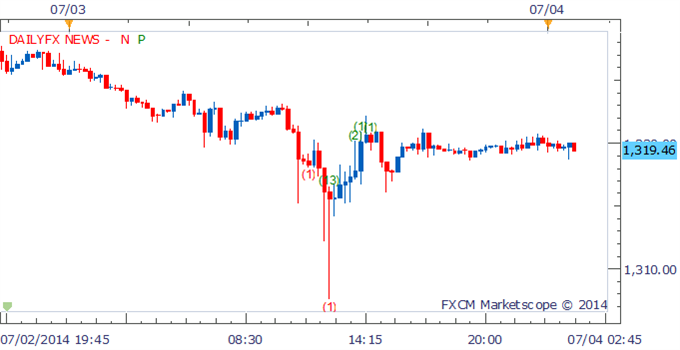 Crude oil and gold are holding steady in Asian trading today after a stellar US Non-Farm Payrollsprint catalyzed a volatile US session on Thursday. Over the week ahead geopolitical tensions in the Middle East and the direction of the US Dollar will likely offer gold and crude oil guidance.

A significantly higher-than-anticipated jobs added figure and unexpected decline in the headline unemployment rate sparked a dramatic jump higher for the greenback, and a commensurate drop for gold and silver. However, as suggested in yesterday’s commodities report a pullback for the precious metals was likely to prove short-lived based on the limited impact of a positive payrolls print on Fed policy expectations. Broader measures of the labor market, including hourly wages growth remain soft, suggesting policy makers may retain their preference for record low rates, which ultimately leaves the US Dollar lacking the necessary fuel to afford a further recovery.

Crude oil traders continue to monitor developments in the Middle East as the conflict in Iraq shows few signs of a swift resolution. Newswires have reported that the fighting has spilled over into neighboring Syria, with militants seizing control of the country’s largest oil field. However, the likely impact on global crude supplies is limited given the beleaguered nation has not exported oil since international sanctions were enacted in 2011. Similarly, Iraqi crude oil production remains unaffected by the unrest, suggesting part of the risk premium built into WTI and Brent may evaporate further as supply disruption fears dissipate.

Hurricane Arthur has also gained some attention from news sources which have noted a potential impact of the hurricane on crude oil prices. Given the path of the storm is predicted to dodge the Gulf Coast region (home to the bulk of refineries and offshore rigs) major supply disruptions are unlikely, suggesting a relatively low influence on WTI.

With major commodities exchanges closed for the Fourth of July holiday on Friday our attention turns to the week ahead. Following a docket drenched with top-tier economic data this week, the calendar looks relatively dry for the week beginning the 7th of July. This may leave the US Dollar bulls lacking catalysts to sustain their run and could slow the greenback’ advance. In the absence of broad-based US Dollar strength, gold and silver are likely to remain elevated.

WTI has cracked key support at 105.00 which paves the way for a test of the commodity’s ascending trendline on the daily. The break of the noteworthy level was preceded by several Doji formations which suggested hesitation from the bulls to lead a recovery for crude oil. 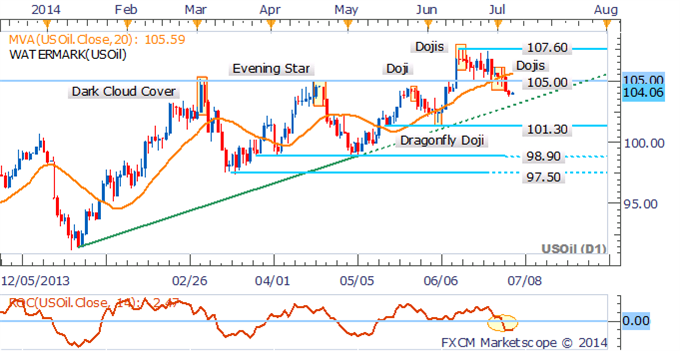 Following a push higher for the precious metal gold continues to consolidate between 1,310 and 1,330. Several Doji candlesticks suggest indecision from traders, yet are not enough to warn of a correction at this stage. 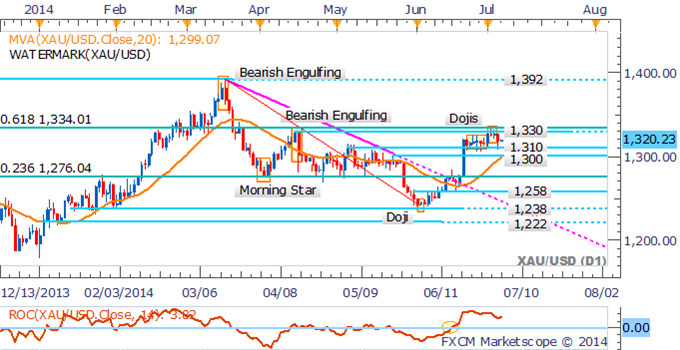 Silver traders seem to be sitting on the sidelines as the precious metal treads water near resistance at 21.10. While several Doji candlesticks suggests the potential for a reversal, with support nearby at 20.80, the extent of any correction may prove limited. Additionally, signs of an uptrend remain as noted by the 20 SMA and Rate of Change indicator. 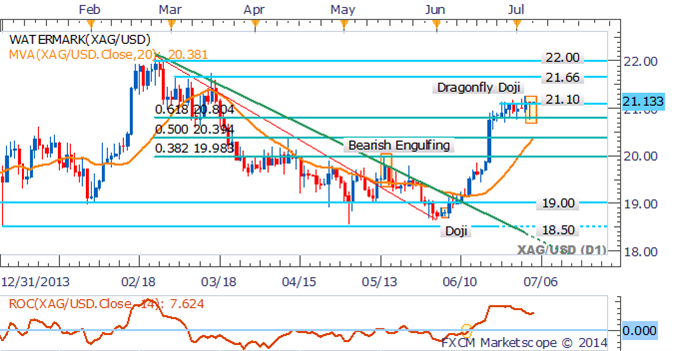 Copper continues its climb following a break above 3.23, which now opens the Feb 2014 high near 3.29. Further gains are supported by the sustained presence of an uptrend on the daily (signaled by the 20 SMA and ROC indicator). 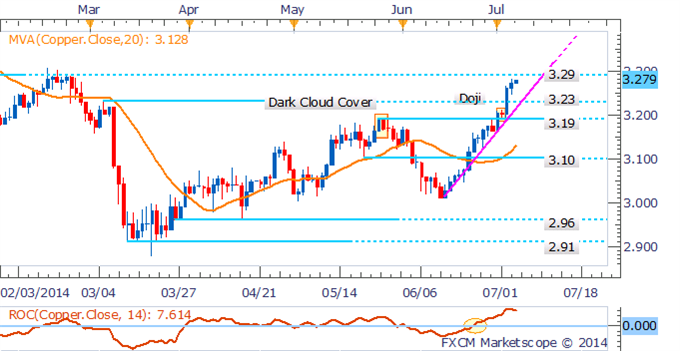 Palladium has failed to breach its 2014 high near 861, which suggests the potential for a short-term pullback. However, with the uptrend intact and absence of a notable reversal signal the extent of a correction may prove limited. Buyers will likely look to keep prices supported at the 836 mark. 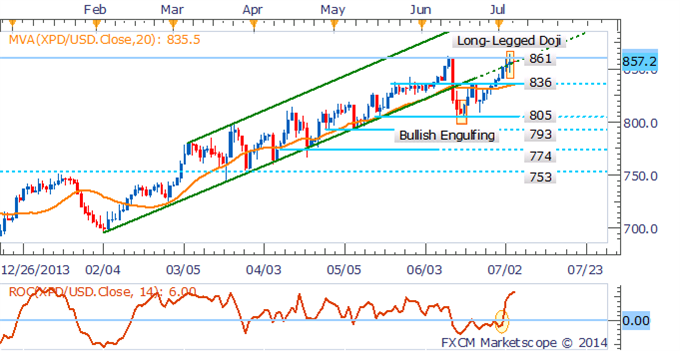 Platinum’s pullback to its original breakout point at 1,489 is seen as a new opportunity to enter long positions for the precious metal. With indications of an uptrend intact (signaled by the 20 SMA) a run on the Sep 2013 high near 1,538 may be achievable. 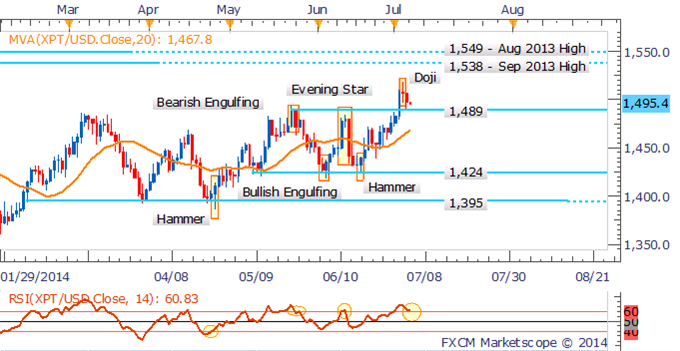