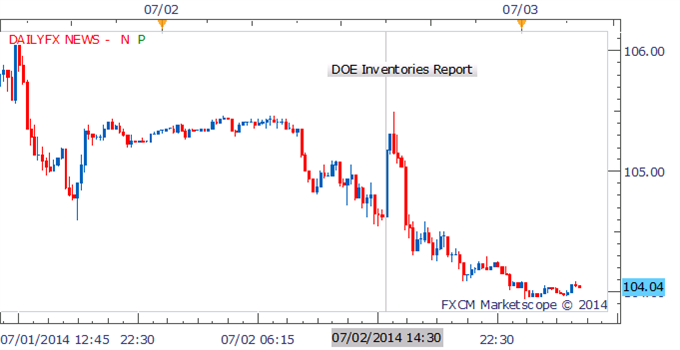 Crude oil continues to slide in Asian trading after plunging by close to 1 percent on Wednesday as ebbing Middle East supply disruption fears overshadow a bullish US inventories report. Meanwhile, gold and silver traders are eagerly awaiting upcoming US payrolls data, which is likely to spark significant volatility for the precious metals via the USD side of the equation. Additionally, copper is easing back in Asian trading after hitting its highest level since February on speculation over positive Chinese economic data.

WTI suffered its largest daily percentage decline in more than a month with traders likely unwinding fear-driven positioning in the commodity built on supply disruption fears in the Middle East. The latest developments in the ongoing unrest in Iraq suggest crude production from OPEC’s second largest producer remains unimpeded at this point. Further, newswires have reported that rebels have returned key ports in Libya to the government, which stands to return the country’s oil exports to more normal levels. As supply disruption concerns continue to evaporate, crude oil could maintain its nascent downward trajectory.

The ebbing of supply disruptions concerns in the Middle East have largely overshadowed what was a surprisingly bullish US inventories report, which yielded short-lived spike for WTI (reaction below). Data released by the US Department of Energy revealed a much higher-than-anticipated drawdown in total crude stocks, while inventories at Cushing fell to their lowest level since 2008. Additionally, refinery utilization jumped to its highest rate this year (now at 91.40%). Overall the Status Report suggests a pickup in demand from the world’s largest consumer of the commodity, which may act to soak up some the abundant supply built up earlier in the year (total stocks were at a record high in May).

An upside surprise to the US ADP figures released overnight (see economic calendar) yielded a sharp spike higher for the greenback, and a commensurate drop for gold. However, follow-through was lacking, likely due to some hesitation from traders ahead of the eagerly-awaited Non-Farm Payrolls print, set to cross the wires in the session ahead. As visible in the chart below, surprises relative to consensus expectations have created significant volatility for gold in the past. 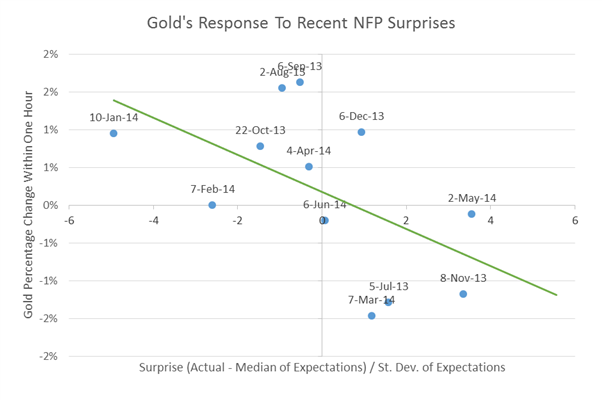 A higher-than-expected figure for the jobs added reading or unanticipated drop in the headline unemployment rate could prompt a jump higher for the greenback, and weakness for gold. However gains for the US Dollar may prove short-lived as traders question the prospect for an adjustment to the Fed’s preference to retain record low rates for some time.

Copper hit its highest level in more than four months after soaring by over 1.9 percent on Wednesday. The gains likely reflected anticipation of a strong reading for Chinese economic data which was released today. The HSBC Services and Composite PMI figures for June both rose relative to the prior reading, and remain in expansionary territory (figures on the economic calendar here).

The reading of 53.1 for the gauge of services sector activity was the highest since October 2012, which may help to alleviate concerns over a deceleration for economic growth in China. Continued improvements in economic data from the Asian giant could yield further gains for copper over the near-term. However, with no major releases on the calendar until Wednesday (CPI figures), the base metal bulls may be left lacking fuel to continue their run over the remainder of the week.

WTI has cracked key support at 105.00 which paves the way for a test of the commodity’s ascending trendline on the daily. The break of the noteworthy was preceded by several Doji formations which suggested hesitation from the bulls to lead a recovery for crude oil. 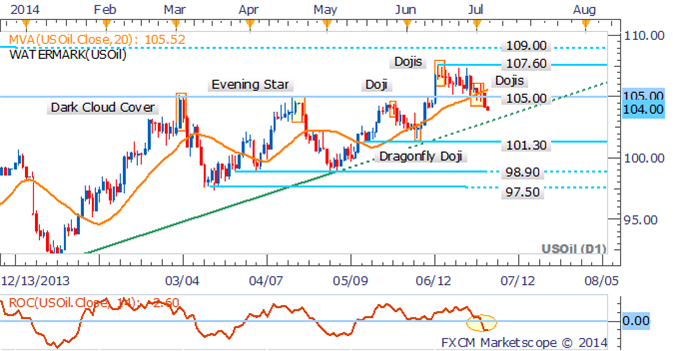 As noted in recent commodities reports gold was primed for another push higher, given several signs of an uptrend had appeared on the daily chart. However, further upside gains may be limited at this point due to noteworthy resistance at 1,330 hanging nearby. Further, several Doji candlesticks suggest hesitation from the bulls, yet are not enough to warn of a correction at this stage. 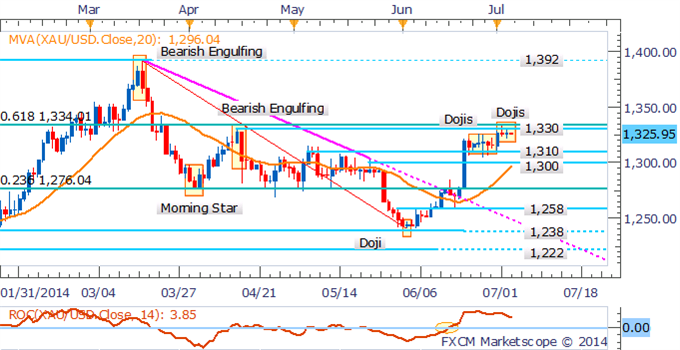 The Silver bulls have finally lost steam after the precious metal pushed an extreme number of consecutive positive periods (noted by the Consecutive Bars indicator). While several Doji candlesticks suggests the potential for a reversal, with support nearby at 20.80, the extent of any correction may prove limited. Additionally, signs of an uptrend remain as noted by the 20 SMA and Rate of Change indicator. 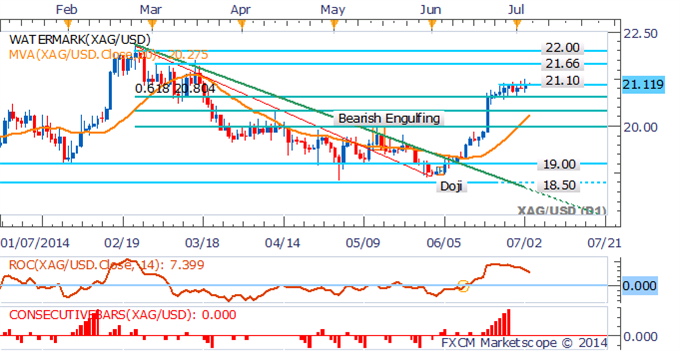 Copper continued its climb following a break above 3.23, which now opens the Feb 2014 high near 3.29. Further gains are supported by the sustained presence of an uptrend on the daily (signaled by the 20 SMA and ROC indicator). 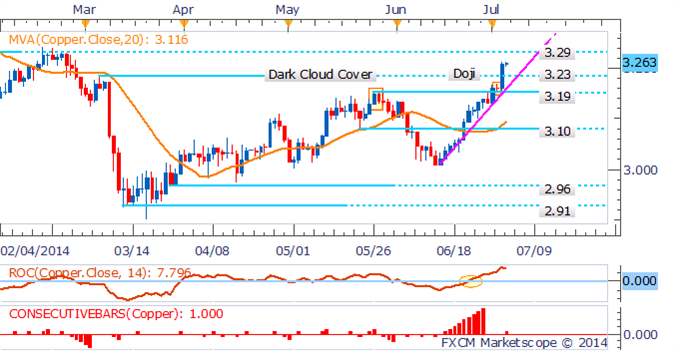 Palladium has failed to breach its 2014 high near 861, which suggests the potential for a short-term pull back. However, with the uptrend intact and absence of a notable reversal signal the extent of a correction may prove limited. Buyers will likely look to keep prices supported at the 836 mark. 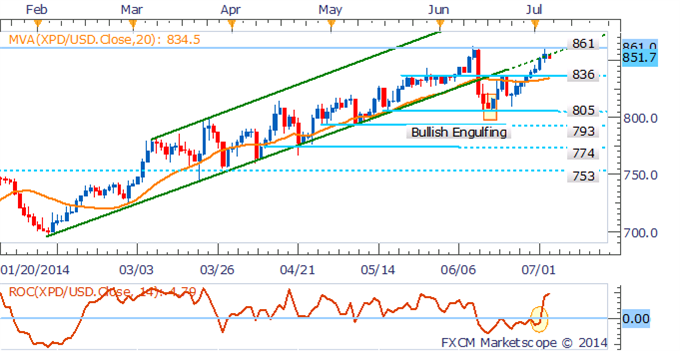 Platinum has broken above its long-held range-top near 1,489 (now support) as indications of an uptrend (20 SMA) suggest the potential for a run on the Sep 2013 high near 1,538. However, with a Long-Legged Doji hints at a potential pullback, which could afford a more favorable entry for new long positions. 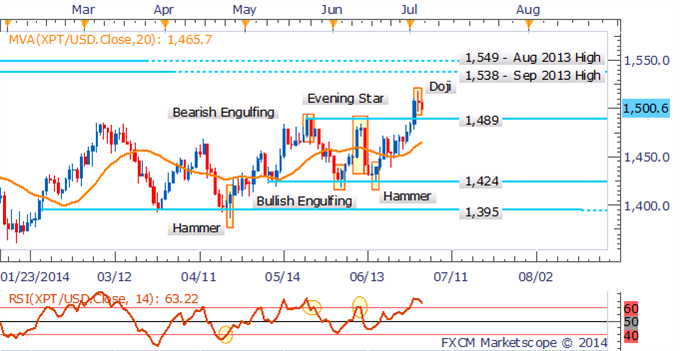