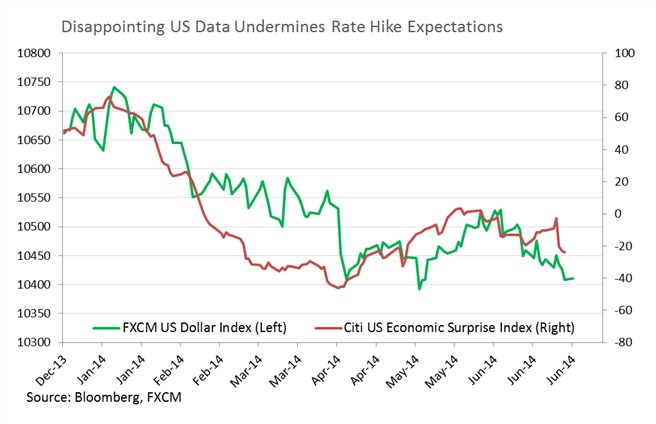 Gold and crude oil are staring down a potentially volatile trading week with an abundance of top-tier economic data on tap alongside ongoing geopolitical tensions. Brent and WTI may be left vulnerable to a further correction as Iraqi supply fears remain unrealized, while gains for gold hinge on soft US data and a continued slide in the greenback.

Fears over supply disruptions to Iraqi crude production continue to influence oil prices as the unrest in OPEC’s second largest producer shows little signs of resolution. Newswires have reported that rebels seized control of a town less than an hour of Baghdad on Friday, as the latest in a series of attacks in the country’s north.

However, at this stage there are no indications that Iraqi oil supply has been affected by the unrest. Indeed, Ministry of Oil officials last week refuted reports suggesting that the country’s largest refinery is under control of rebel militia. As concerns over crimps to supply ease, this could leave crude prices vulnerable to a correction. Similarly as traders discount the potential for a further escalation in the conflict, gold may fail to find further safe-haven demand.

US Data To Catalyze Volatility

Traders will have a bounty of top-tier economic data to digest over the remainder of the week with US NFPs and ISM Manufacturing Data headlining the docket. Patchy US data prints and guarded comments from Fed officials on the timing of a potential rate hike left the greenback to maintain a downward trajectory over June, which aided gold and silver’s recovery for the month. Silver is set to outperform its bigger brother, with a gain of over 11 percent for the month, its largest monthly percentage increase since August 2013.

A series of better-than-anticipated readings from the world’s largest economy this week could spark a bounce for the greenback and put pressure on the precious metals. However, further follow-through and a shift in tides for the USD ultimately hinges on expectations for more aggressive US monetary policy normalization. In this respect the data may come up short, given an incremental data point is unlikely to yield a more hawkish tone from policy makers at this point.

With the uptrend intact for crude oil, pullbacks to support at 105.00 are seen as an opportunity to enter new long positions. A daily close above nearby resistance at 107.60 would open the psychologically-significant 109.00 handle, while a close below 105.00 would negate a bullish bias. 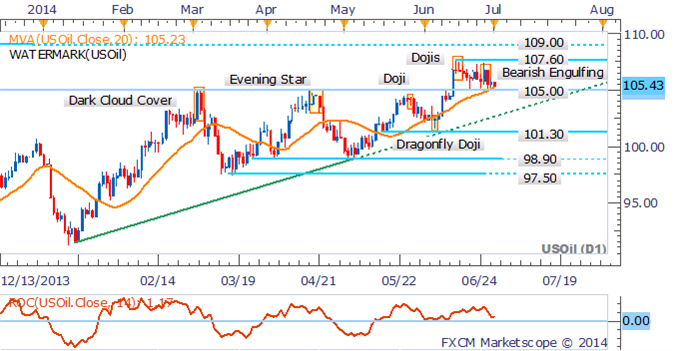 Gold may be primed for a push higher given signs of an uptrend have emerged on the daily chart. A break above several resistance levels and spike in volatility also suggests the potential for further gains. The slight pullback to support at 1,310 is seen as an opportunity for new long entries, with a target offered by the April high near 1,330. While several Doji candlesticks hint at hesitation from traders, they alone are not enough to signal a potential correction at this point.

The DailyFX SpeculativeSentiment Index suggests a bullish bias for gold based on trader positioning. 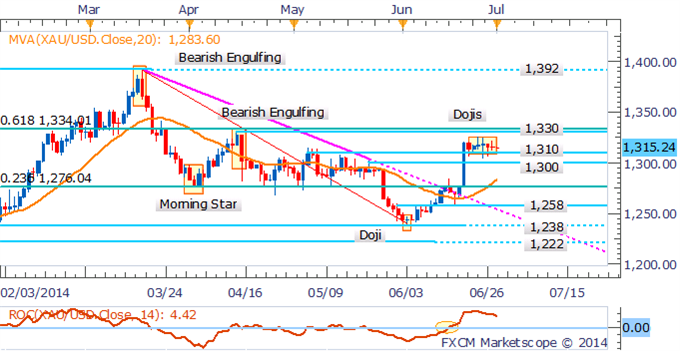 The Silver bulls have finally lost steam after the precious metal pushed an extreme number of consecutive positive periods. While a Hanging Man formation suggests the potential for a reversal, with support nearby at 20.80, the extent of a correction may prove limited. Additionally, signs of an uptrend remain as indicated by the 20 SMA and Rate of Change indicator. 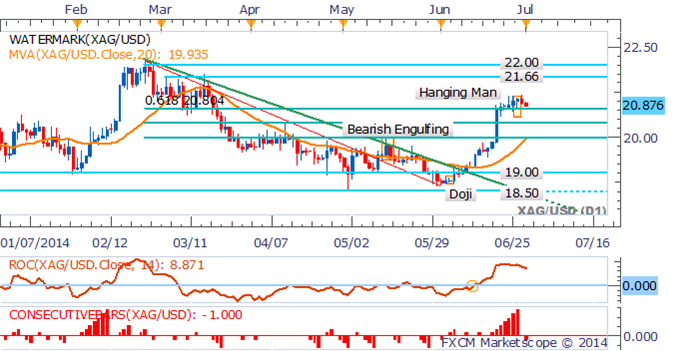 Copper’s pullback from noteworthy resistance at 3.19 has yielded a Hanging Man formation, which suggests the potential for a correction to 3.10. However, given indications of a short-term uptrend remain intact, a pullback may find little follow-through. 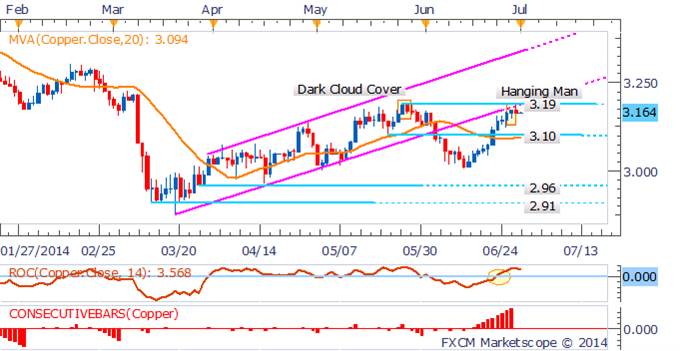 Palladium’s break above 836 has nullified a Hanging Man formation on the daily and negates a bearish technical bias for the precious metal. This follows a push above the 20 SMA which signals the potential emergence of an uptrend. Some skepticism for further gains may still be warranted given former trendline support-turned resistance looms nearby. 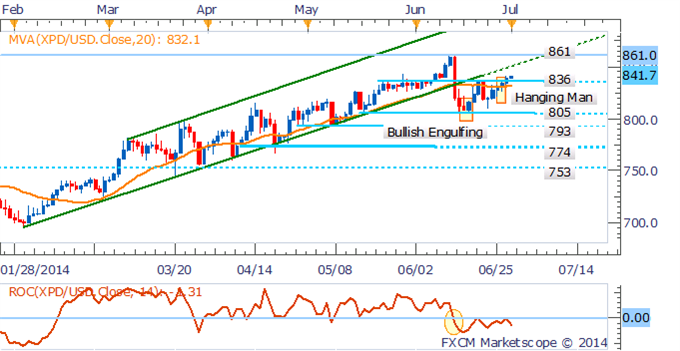 Palladium continues its ascent towards its range-top near 1,489, which may act to cap further gains. A test of the 1,489 mark and emergence of another bearish reversal pattern would be seen as an opportunity to enter new short positions, with a target offered by support at 1,424. 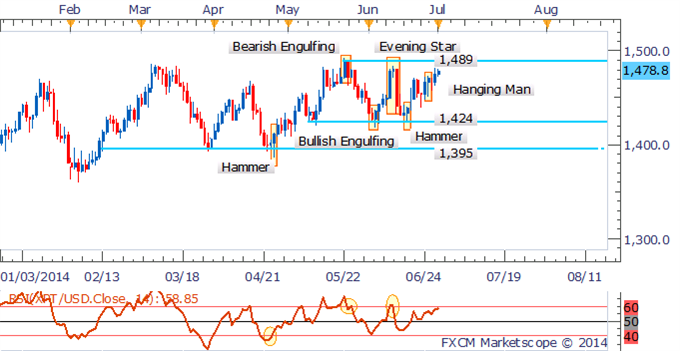