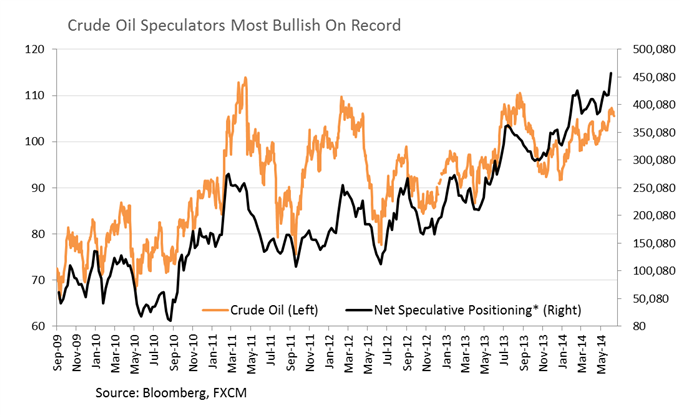 Gold and silver could continue to remain elevated over the session ahead with a light US economic docket offering little to inspire the US Dollar bulls to stage a return. Meanwhile, ebbing fears of Iraqi crude oil supply disruptions may lead traders to further unwind fear-driven positioning in WTI and Brent. A jam-packed calendar next week will likely bring volatility to the commodities space with US NFPs, ISM data and Chinese manufacturing gauges headlining the event risk.

Following the greenback’s plunge on the back of a sharp downward revision to US Q1 GDP figures earlier in the week, a set of near-consensus prints for US data overnight has done little to aid the US Dollar’s woes. With no major US events on the calendar over the session ahead, the reserve currency may be left with little more than hopes of a corrective bounce to afford a recovery. This could leave gold and silver prices to remain elevated. Silver is set for its 9th straight day of gains, having rallied by close to 13 percent for the month of June.

Fears of Iraqi oil disruptions due to the ongoing unrest in the country’s north may prove unfounded with the conflict yet to impede the country’s oil production. The Iraqi Ministry of Oil has refuted reports from newswires that asserted their largest oil refinery had been seized by militant insurgents. The government agency also reported this week that oil exports from southern ports for the month of May (before the conflict began) reached their highest since 2003. The prospect of Iraqi oil continuing to flow uninterrupted leaves WTI and Brent vulnerable to a correction as fear-driven positioning is unwound. Indeed, futures positioning suggests the long WTI trade may be overstretched (see chart below).

Also in the energy commodities space, natural gas prices suffered their largest one day percentage fall since May 8th after an inventories report revealed a higher-than-anticipated build in storage figures for the week. However, with total stockpiles still well below their 10 year average for the month of June, there is little evidence of a supply glut, which may limit the extent of further falls. 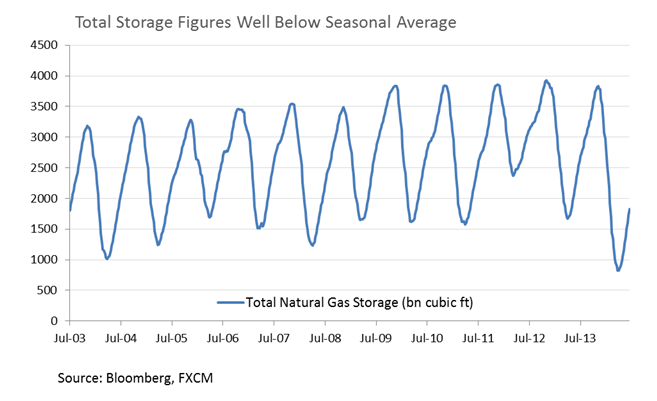 Plenty of Volatility Catalysts In The Week Ahead

Next week’s lineup of events offers traders a bounty of potential volatility catalysts. Patchy US economic data over the past month alongside guarded comments from Fed officials has left the US Dollar to sustain its downward trajectory. An upside surprise to the headline NFP figure and drop in the unemployment rate could prompt a momentary recovery for the USD. A significant deviation from expectations (details below) would also likely spark significant volatility for the reserve currency and hence gold prices. However, at this stage it would take a dramatic improvement in the labor market figures to yield a shift in Fed policy expectations, suggesting a lift to the greenback could prove short-lived.

Copper has posted its 10th consecutive day of gains ahead of Chinese manufacturing figures due on Monday. Both the final HSBC PMI and Official PMI readings for June will offer a further indication of whether the manufacturing sector has reached a turning point, as suggested by preliminary figures released earlier in the week. A higher-than-anticipated reading would likely alleviate concerns over a further slowdown in Chinese economic growth, which could fuel further strength for copper. 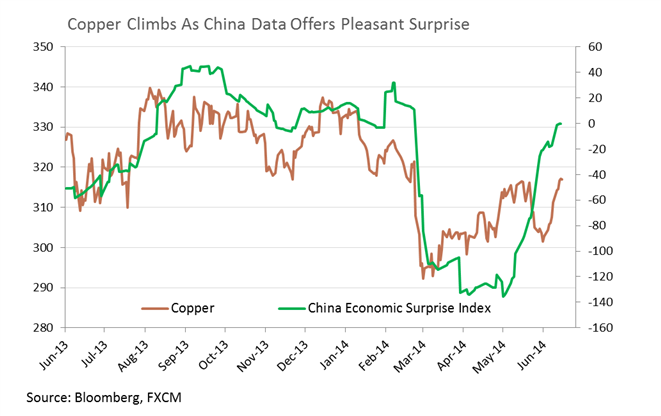 With the uptrend intact for crude oil, pullbacks to support at 105.00 are seen as an opportunity to enter new long positions. A daily close above nearby resistance at 107.60 would open the psychologically-significant 109.00 handle, while a close below 105.00 would negate a bullish bias. 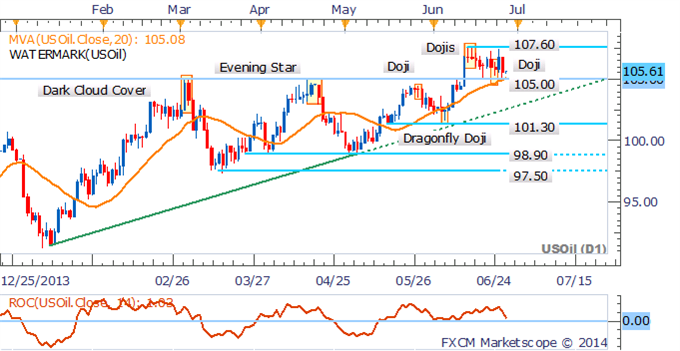 Gold may be primed for a push higher given signs of an uptrend have emerged on the daily chart. A break above several resistance levels and spike in volatility also suggests the potential for further gains. The slight pullback to support at 1,310 is seen as an opportunity for new long entries, with a target offered by the April high near 1,330. While several Doji candlesticks hint at hesitation from traders, they alone are not enough to signal a potential correction at this point. 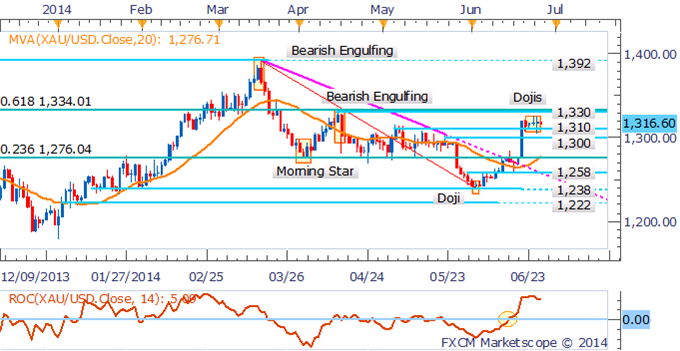 Silver may be set to extend its recent gains following a break above the 61.8%Fib Retracement Level at 20.80. With an uptrend on the daily intact, the March highs near 21.66 look attainable. However, with Consecutive Bars pushing extremes not seen since February, it would not be surprising to see a slight pullback before the precious metal continues its journey higher. 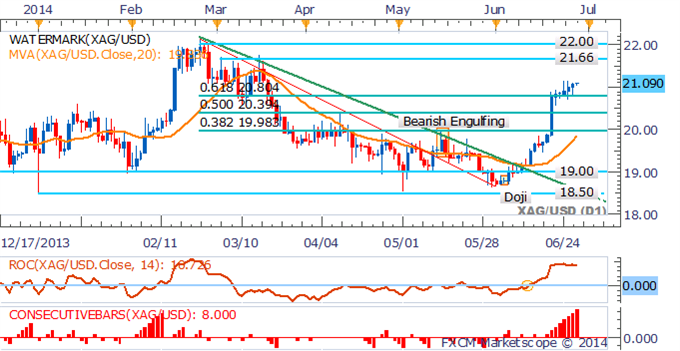 Copper remains in a short term uptrend following the push above resistance at 3.10. However, skepticism over further gains may be warranted given extreme reading evident for Consecutive Bars, as well as a Hanging Man candlestick formation on the daily. Sellers will likely look to keep the base metal contained below the 3.19 mark. 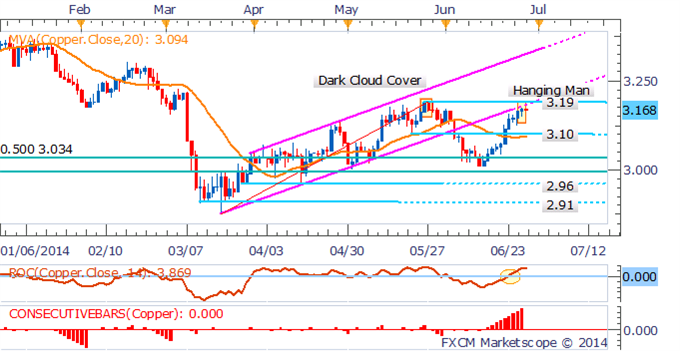 At this stage palladium’s recovery is seen as an opportunity to enter new short positions given resistance at 836 hangs nearby and signs of downtrend have emerged. Confirmation of a Hanging Man candlestick pattern from a successive down-day would further afford a bearish technical bias. Buyers will likely look to keep the precious metal supported at the 805 mark. 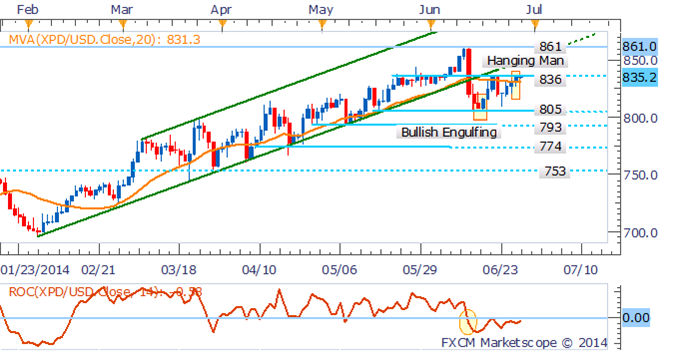 Platinum’s consolidation continues following the bounce off its range-bottom at 1,424 on the back of a Hammer formation. The emergence of a Hanging Man candlestick on the daily offers a potential reversal signal, which has been confirmed by a successive down-day. A correction may be met by buying support at 1,424. 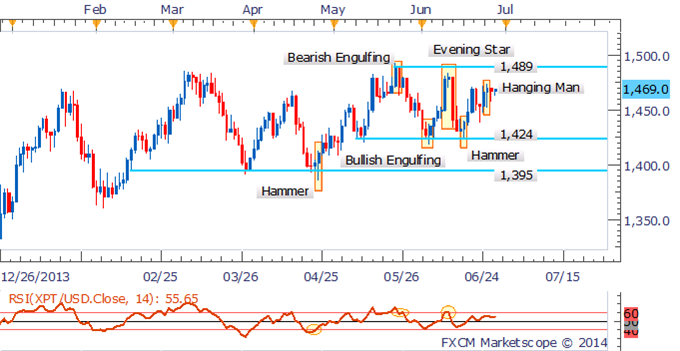