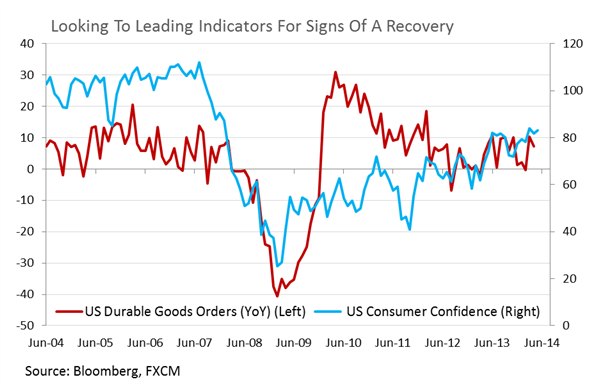 Elevated geopolitical tensions could continue to act as a source of support for crude oil via fears of supply disruptions, and afford gold a recovery based on safe-haven demand. WTI may also find further strength on the back of a set of positive prints from a string of US leading indicators due over the remainder of the week. Finally, the copper bulls have found fresh fuel to continue their run from today’s Chinese PMI data, which revealed the first expansion since December 2013.

Both Brent and WTI are edging higher in Asian trading, likely bolstered by continued fears of supply disruptions from Iraq. The latest reports from the region suggest that militant insurgents have seized control of the country’s borders with neighboring Syria and Jordan. The rebel attacks in the country’s North have raised concerns that Iraqi oil production, which accounts for 11 percent of OPEC supply may be threatened.

With a resolution to the conflict looking out-of-reach at this point, an escalation in the region could continue to offer crude oil prices some support. However, at this stage the attacks have not extended to the country’s primary oil production facilities, which are located in the South. This suggests supply may not be impinged in the near-term and leaves further gains to hinge on speculation alone.

Similarly gold and silver prices may stand to strengthen on fears of an escalation in the ongoing turmoil. The precious metals have generally performed well during periods of heightened geopolitical tensions. Similarly, traders should be mindful that fear-drive positioning can be prone to quickly unravel on positive news-flow.

US Leading Indicators On Tap

While an absence of major US data over the coming 24 hours may yield little in the way of volatility for the commodities space, the week ahead contains several noteworthy releases. US Durable Goods Orders and Consumer Confidence figures will help provide an indication of whether the US economy has been able to regain momentum, which follows a lackluster showing in the first quarter. A set of stronger-than-anticipated prints could bolster crude oil prices via implications for greater demand from the world’s largest consumer of the commodity.

Copper is heading for its 7th straight day of gains following a better-than-anticipated print from a key gauge of Chinese manufacturing activity earlier in the session. The HSBC Flash PMI figure of 50.8 for June was the highest since November 2013, beating economists’ expectations for a reading of 49.7, and put the index back in expansionary territory.

The leading indicator for the health of the Chinese economy offers an encouraging sign that helps alleviate concerns over a further deceleration in growth. On balance, recent data out of the region has surprised relative to expectations, which offers a positive signal for the country’s appetite for base metals including copper (see chart below). An upside surprise to Industrial Profits data from the Asian giant due later in the week could fuel further gains for the commodity (see economic calendar for details). 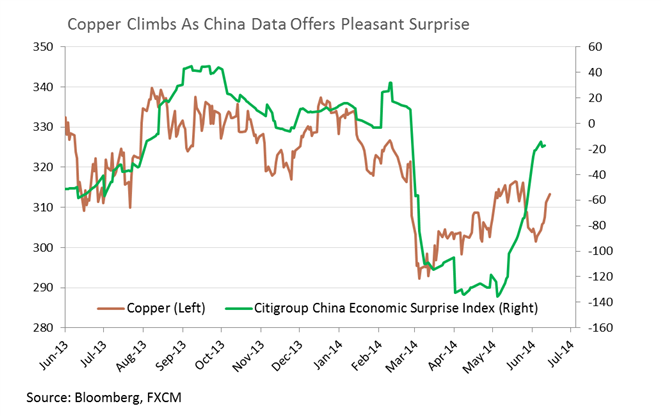 As noted in recent commodities reports, the pullback to support 105.00 offered a new long entry opportunity for WTI. While the uptrend remains intact, the extent of further gains may be limited by nearby resistance at 107.60. The uptrend for the commodity remains intact as signaled by the Rate of Change indicator and 20 SMA, which leaves a bullish technical bias preferred. A daily close above 107.60 would signal enough conviction amongst traders to open an advance on the psychologically-significant 109.00 handle. 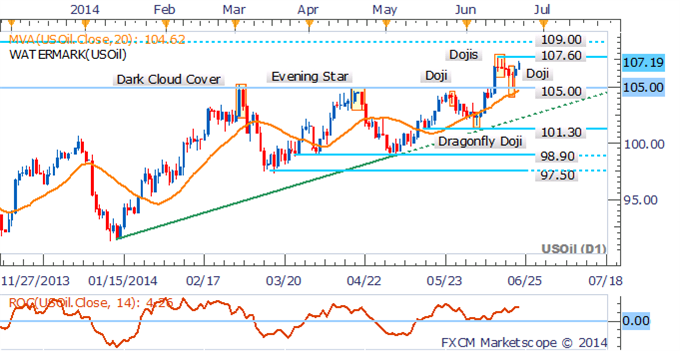 Gold may be primed for a push higher given signs of an uptrend have emerged on the daily chart. A break above several resistance levels and spike in volatility suggests the potential for further gains. The slight pullback to support at 1,310 is seen as an opportunity for new long entries, with a target offered by the April high near 1,330. 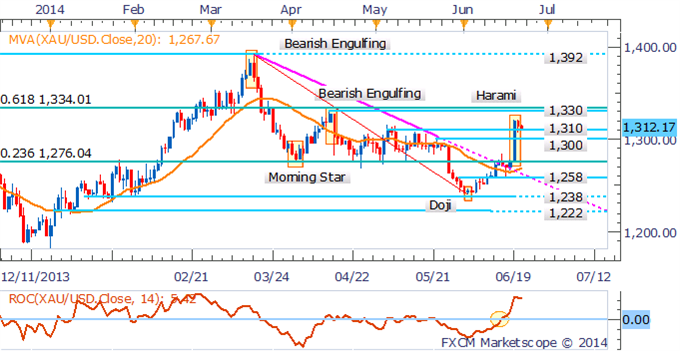 Silver’s ascent has stalled at the 61.8% Fib Retracement Level with a Doji pattern suggesting signs of hesitation amongst traders. While this could prompt a slight retreat to support at 20.40, with the uptrend intact a correction would be seen as an opportunity to enter new long positions. A more convincing daily close above 20.80 could open up a run on 21.66. 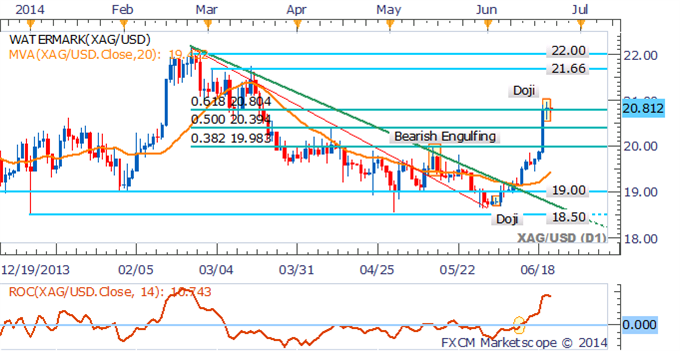 The trend appears to have shifted for copper following a push above a key resistance level at 3.10. However, skepticism over further gains may be warranted given the base metal has not seen as this many consecutive up-days since December 2013, which were shortly followed by a slight retreat. Sellers will likely look to keep the base metal contained below the 3.19 mark. 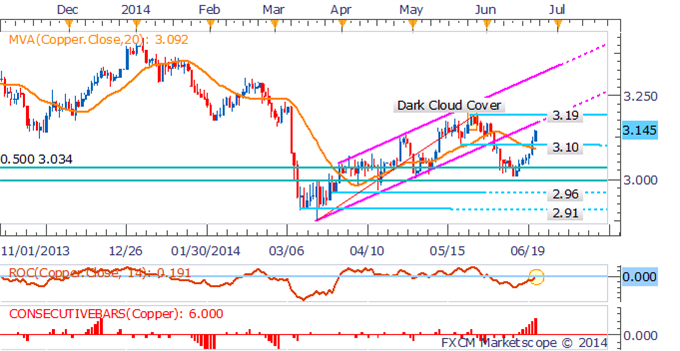 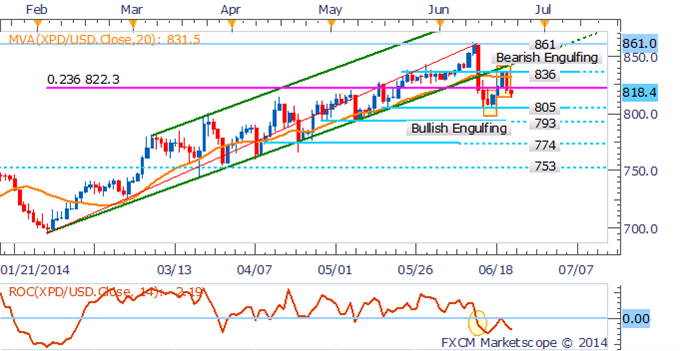 Platinum’s consolidation continues following the bounce off the range-bottom at 1,424. While a Hammer candlestick hinted at a push towards 1,489, the emergence of a Dark Cloud Cover pattern suggests the bears may look to lead a retreat back to 1,424. 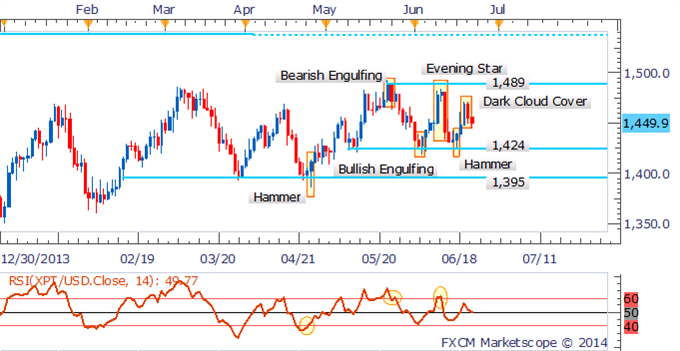