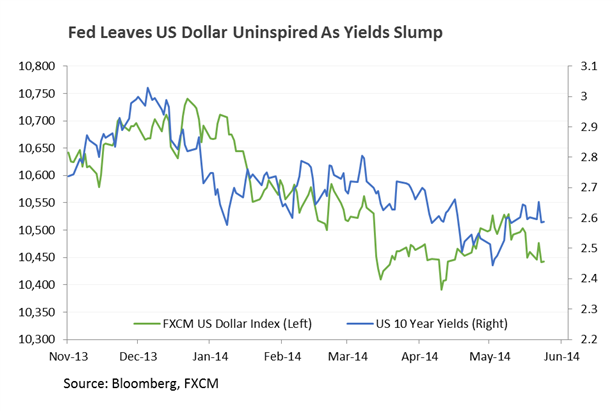 Gold and silver may be afforded a continued recovery after the June FOMC Meeting left the US Dollar bulls uninspired. Also in the precious metals space platinum and palladium’s recent bounce may be under threat if a deal to end the South African mining worker’s is finally reached. Meanwhile tensions in the Middle East could keep crude oil benchmarks elevated in the short-term, while the supply picture continues to offer bearish overtones.

As suggested in yesterday’s commodities report gold and silver were set for a volatile session on the back of the June FOMC rate decision. The event did not disappoint; with silver prices soaring to the highest level in a more than a month, following a dovish lean in the statement and the ensuing press conference with Fed Chair Janet Yellen. Full details on the Fed’s decision and set of economic projections available here.

Expectations for a weaker pace of US economic growth in 2014, alongside forecasts for inflation to remain subdued suggest a rise in the Federal Funds rate remains some time off. The prospect of a continued highly accommodative stance from the Fed to support the US recovery could lead to a prolonged slump for US 10 year yields, and the US Dollar, which in turn may lead to a stronger gold price.

Concerns over disruptions to Iraqi oil supplies continue to offer a source of short-term support to crude oil. Conflict between militant insurgents and the Iraqi army in the country’s north have raised the threat of a crimp to production in OPEC’s second-largest member. However, at this stage the facilities that account for the bulk of supply, which are located in the southern region, remain unaffected. This suggests that unless the conflict were to escalate significantly production may continue as normal, which could leave global crude oil benchmarks vulnerable to a correction.

Meanwhile, the latest US inventories data from the Department of Energy revealed crude production in the world’s largest consumer of the commodity hit the highest level since 1986. Additionally, inventories at Cushing, OK (the delivery point for WTI), rose for the first time since April 4th. With refinery utilization also unexpectedly falling, the report hints that supply may be outstripping demand in the US oil market, which paints a bearish picture for WTI. 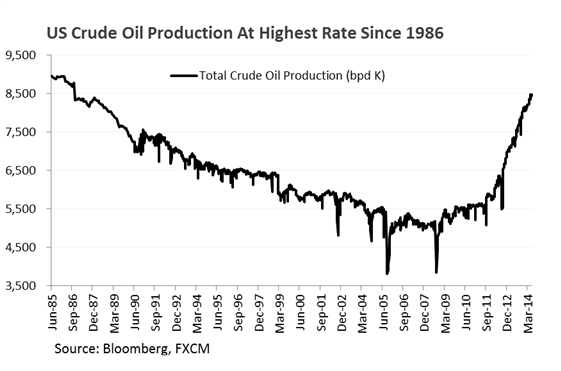 The 5-month long South African mining workers strike may be close to reaching a resolution according to the latest comments from union officials. A deal to put the 70,000 striking miners back to work in the country’s platinum mining belt, which accounts for roughly 70 percent of global supply, would likely alleviate fears over production disruptions and could lead the precious metal lower. Palladium, which is mined together with platinum, may be particularly exposed, given that it appears overvalued on a relative basis. 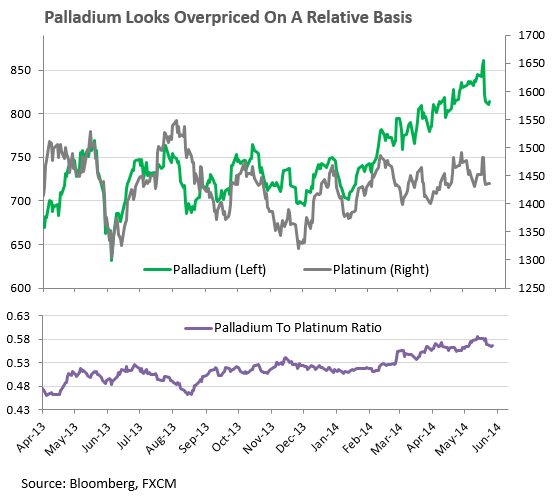 WTI continues to pullback following signs of hesitation from traders denoted by a couple of Doji formations on the daily. A retreat to support at 105.00 would be seen as an opportunity to enter new long positions given the uptrend remains intact (signaled by the Rate of Change indicator and 20 SMA). 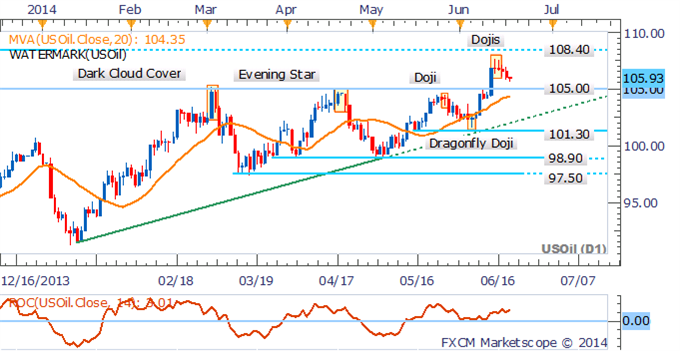 Gold continues to tease traders near noteworthy resistance at 1,276 (23.6% Fib Level). A more significant daily close above the mark would support a bullish technical bias given the 20 SMA and a positive Rate of Change indicator reading, which suggest that an uptrend has emerged. 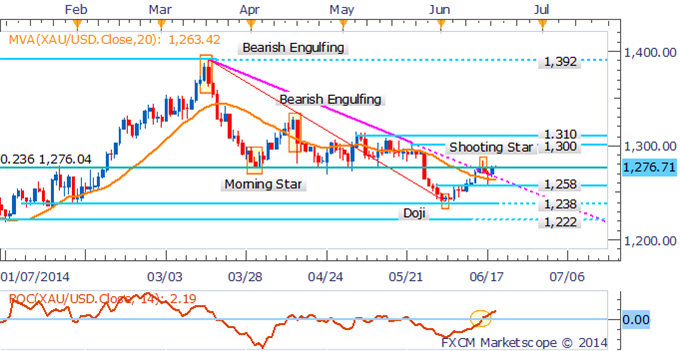 Silver is at a crossroads as the bulls make another run on the critical 20.00 handle which has capped the precious metal since mid-April. A bearish reversal candlestick pattern near the notable level of resistance would offer new short entries. 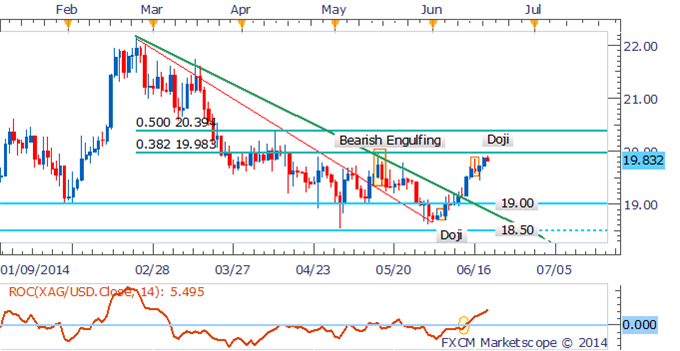 Copper’s pullback leaves the downtrend for the base metal intact which is lent further credence by the 20 SMA and Rate of Change indicator. A push below support at 3.034 would open up the psychologically-significant 3.00 handle. 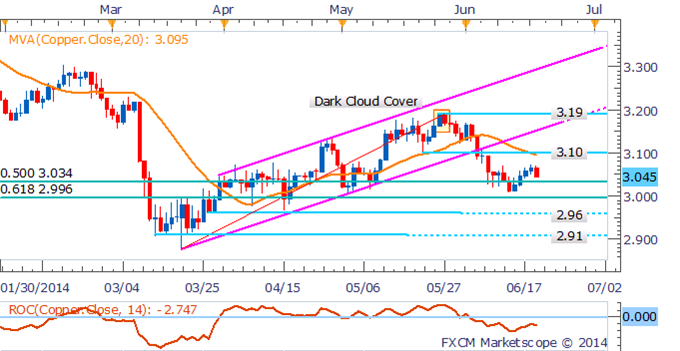 Palladium’s break below the ascending trend channel on the daily has ended the commodity’s uptrend that had persisted since early February. While the precious metal has recovered some ground on the back of a Bullish Engulfing candlestick pattern, further gains may be limited given resistance looms nearby at 836.

Palladium: Recovery May Be Limited By Resistance Overhead 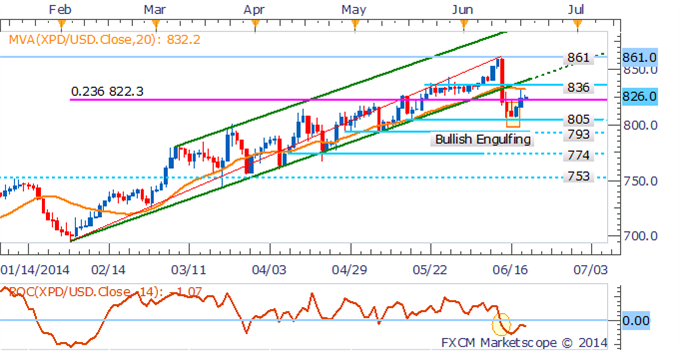 Platinum has bounced off the range-bottom at 1,424 following the formation of a Hammer candlestick, which may herald a push to the range-top at 1,489. 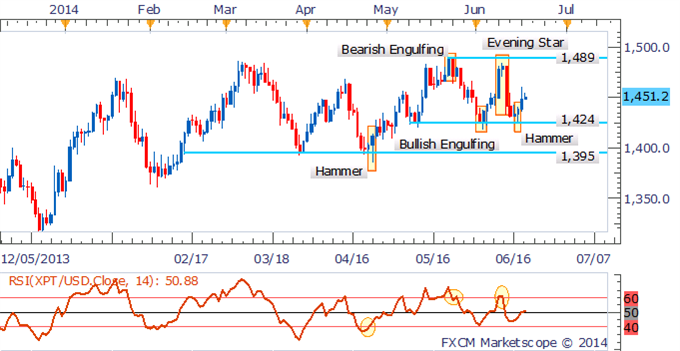