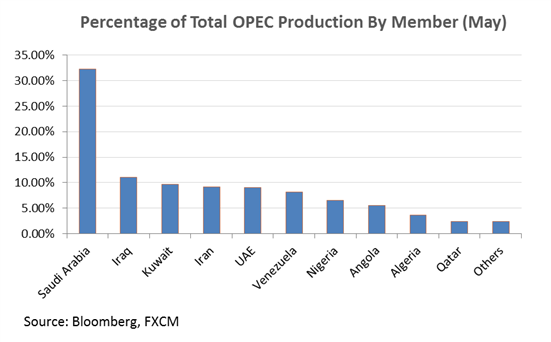 Escalating geopolitical tensions in the Middle East may stand to strengthen crude oil on production concerns, as well as bolster safe-haven demand for gold and silver. Additionally, next week’s FOMC Meeting may fail to stir the greenback bulls, which could afford gold a further recovery. Meanwhile, palladium and platinum’s correction may continue as reports of a deal to end the South African mining worker’s strike suggest a resolution to the saga may be near.

Fresh reports of further conflict in Northern Iraq have heightened fears over disruptions to the country’s supply of crude oil. In the latest of a series of escalating developments, a militant group is reportedly marching south towards Baghdad after seizing control over the city of Mosul earlier in the week.

While crude oil production may not have been impacted at this stage, speculation over possible supply constraints has sent benchmark prices soaring. WTI posted its largest one day percentage gain since March 3rd, to trade at its highest level since September 2013. Iraq is the second largest producer of crude oil in OPEC, accounting for over 10 percent of the group’s production of the commodity (see chart below). This suggests the potential ramifications for crude supplies of an escalation in the conflict are severe.

The heightened geopolitical tensions in the Middle East may also act as a source of support for silver and gold, which generally benefit from safe-haven flows from investors. With a swift resolution to the conflict looking unlikely at this stage, both crude oil and gold may continue to be well-supported in the short-term. However, traders should be mindful that raised demand on the back of geopolitical events can quickly evaporate, leaving the potential for a sharp correction, as demonstrated by platinum’s recent collapse (noted below). 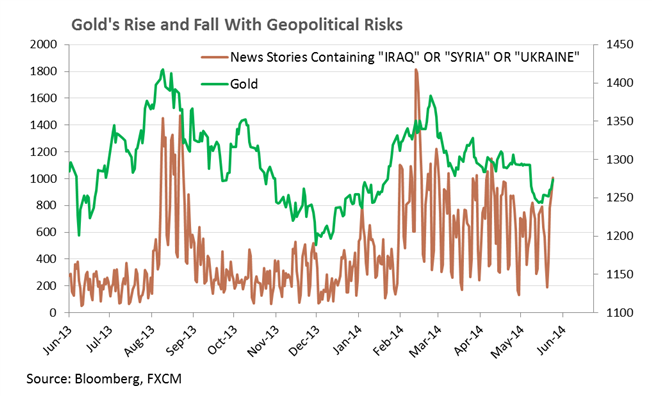 University of Michigan Consumer Confidence figures set to cross the wires in the coming hours may fail to stir the US Dollar bulls, which could afford gold and silver a further recovery. The gauge of consumer sentiment in the world’s largest economy has faced a lackluster response in recent months from the greenback, which may in part be due to the limited implications of the release on Fed policy.

With the JuneFOMC Meeting on the cards next week, traders will be looking for insights into the potential path for borrowing rates in the US. At this stage it appears unlikely the Fed will budge from its preference for record low interest rates to remain over the near-term. This is in line with policy makers’ desire to see continued progress in the US labor market and avoid derailing the economic recovery underway. In the absence of a hawkish from lean from Committee members, the US Dollar may remain dormant, which in turn could lift gold and silver prices.

Newswires have reported progress on deal to end the South African mining workers’ strike, which in turn has pulled the rug out from under platinum and palladium. The union representing workers in the country’s platinum belt has reportedly reached a deal with the region’s major producers, which will now be put to workers for approval.

Speculation over a final resolution to the strike is likely to further alleviate concerns over production of the precious metals in South Africa, the world’s largest supplier of platinum. As noted in recent commodities reports; geopolitical risks seldom leave a lasting impact on underlying supply and demand dynamics. This suggests as traders unwind fear-driven positioning in the precious metals, there could be further weakness ahead. 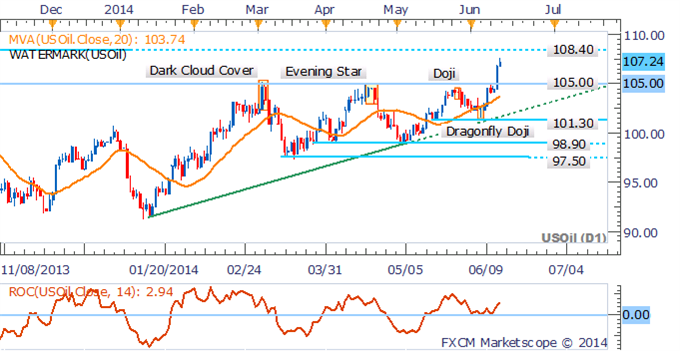 Gold is at a critical juncture as the precious metal tests its descending trendline on the daily and noteworthy resistance at the 23.6% Fib Level. Fading downside momentum signaled by the Rate of Change indicator alongside a daily close above the 20 SMA suggest a potential shift in the trend. Clearance of 1,276 would afford a bullish technical bias and open the 1,305 mark, while a correction may be met by buying support at 1,258.

Gold: At A Critical Juncture Near Key Resistance 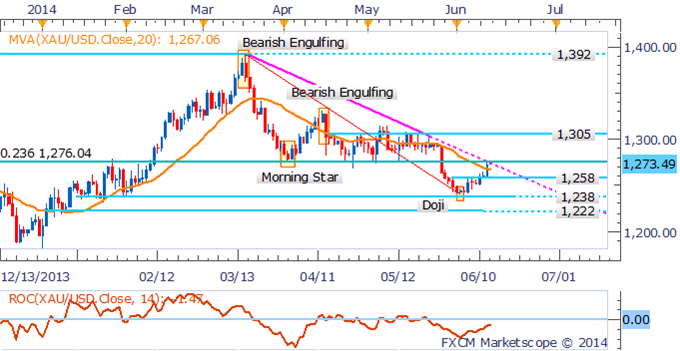 Silver’s breakout above the descending trendline from its 2014 high may afford the commodity further gains. A shift into positive territory from the Rate of Change indicator signals some upside momentum, which puts the next noteworthy resistance level at $20.00 in sight. 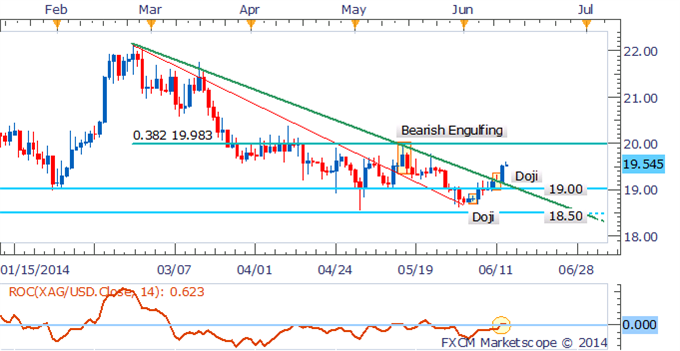 Copper’s woes may be set to continue as momentum builds in the nascent downtrend. The break below the 50% Fib Level which had offered some support to the base metal, opens the psychologically-significant $3.00 handle. 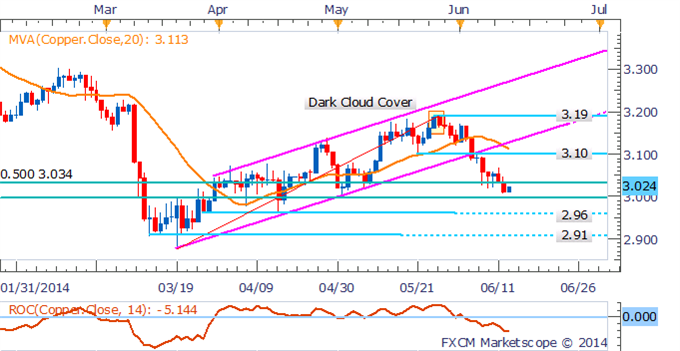 Palladium’s recent plunge has ended the commodity’s uptrend that had persisted since early February. The break below the ascending trend channel and support at 836 suggests the potential for further weakness. Below the 23.6% Fib Retracement Level, the 793 mark may prompt some buyers to emerge. 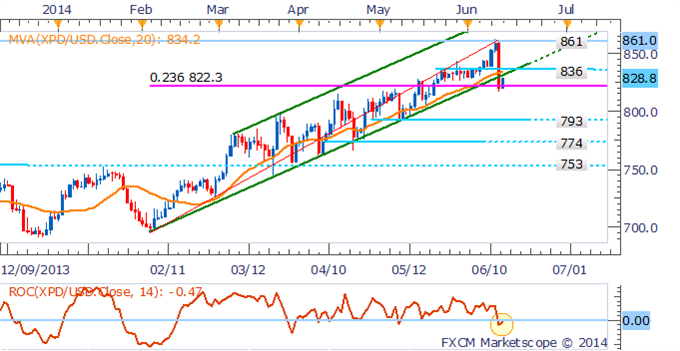 As noted in yesterday’s commodities report; platinum was primed for a pullback following a Doji near the range-top at 1,489. Additionally, the cross back below the 60 level by RSIsuggests the recent range may remain intact. Further declines are likely to be met by buying support at 1,424. 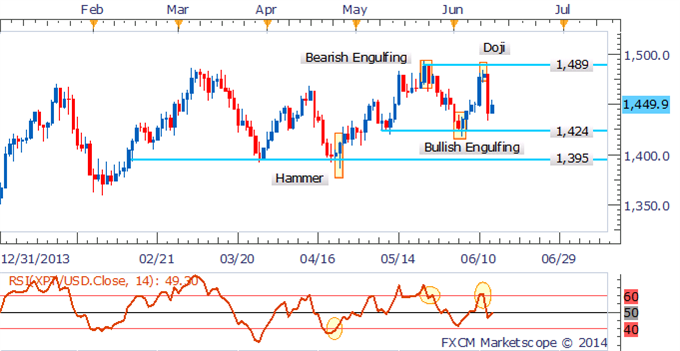