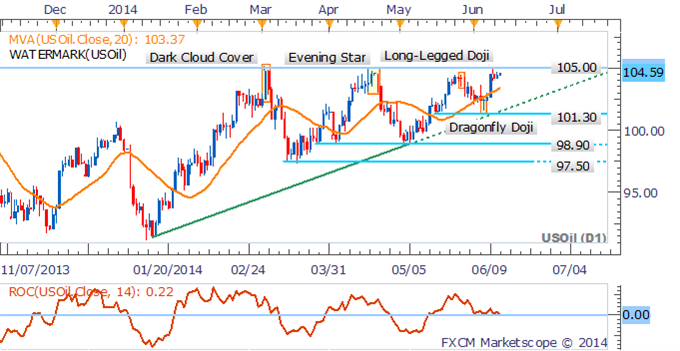 Palladium prices have pushed to multi-year highs as the ongoing South African mining worker’s strike fuels further production concerns. Meanwhile, gold and silver may be afforded a continued recovery if the US Dollar remains despondent in the face of upcoming US Retail Sales data. Additionally, copper traders will be closely eyeing a raft of Chinese economic figures due on Friday for an indication of the country’s potential commodities appetite.

While gold and silver have managed to stage small rebound in recent trading, palladium has powered to fresh multi-year highs as supply disruption fears continue. This follows on from reports earlier in the week of failed negotiations between the striking mining workers and their employers in South Africa, the world’s second largest producer, which may stand to crimp production of the precious metal.

As noted in recent commodities reports, the standoff between both sides shows little signs of a resolution at this stage, which may continue to act as a source of support for platinum and palladium. Interestingly, despite being mined together; palladium has strongly outperformed its younger brother platinum. This may be due to the later facing more noteworthy technical levels of resistance, which may be prompting some hesitation amongst the bulls.

Gold and silver may be afforded some breathing room over the session ahead if upcoming US economic data fails to lift the greenback. The Retail Sales figures for the world’s largest economy are tipped to reveal a 0.6 per cent increase for the month of May, which would mark the fourth consecutive positive print for the series.

While the data acts as a leading indicator of the health of the US economy, the implications for Fed policy are relatively limited at this stage. This comes as Fed officials continue to offer a timid stance on the possibility of future rate hikes in light of subdued inflation expectations, as well as a desire to see continued progress in the labor market. As such, barring a significant deviation from expectations, the US Dollar may see a muted reaction to the release, which in turn could leave gold and silver to edge higher.

Copper In A Corner Ahead of China Data

Copper prices are heading for their largest weekly percentage decline since Mid-March ahead of upcoming Chinese economic data. Industrial Production and Retail Sales figures for the month of May, set to cross the wires on Friday will help offer some insights into the economic health of the largest consumer of the base metal.

Expectations are for a rise in Industrial Production for the year of 8.8 per cent, which follows on from the prior reading of 8.7 per cent (the lowest since 2009). A higher-than-anticipated print may help alleviate concerns over a further slowdown in Chinese economic growth, which in turn could see buyers return to commodity.

WTI is once again teasing traders near the psychologically-significant 105.00 handle, which follows a push off the 101.30 mark. Additional support has been provided to the commodity by the ascending trend line from the 2014 low, which has resulted in the appearance of a triangle formation. A daily close above 105.00 would open up the next definitive level near 108.40. However, if we see another bearish reversal candlestick pattern emerge, it would suggest a potential pullback to the trendline support.

Several bearish technical signals remain for gold despite the precious metal’s recent recovery. These include the presence of a downtrend signaled by the 20 SMA, as well as the Rate of Change indicator suggesting continued downside momentum. A correction is likely to be met by buying support at the nearby 1,258 mark, while rallies may encounter resistance at the 23.6% Fib Level at 1,276. 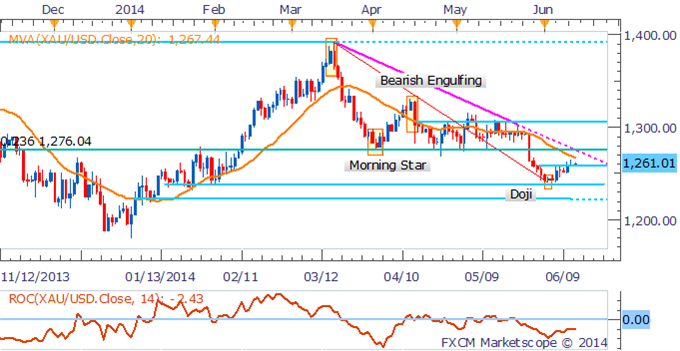 Silver is at a critical juncture as the precious metal tests the descending trendline from its 2014 high. A Doji candlestick formation on the daily suggests the bulls are hesitant to push prices higher. However, with key support nearby at the $19.00 handle, the bears may similarly refrain from entering new positions. A daily close above the trendline resistance would signal strong conviction amongst buyers, and would pave the way for an advance on the psychologically-significant $20.00 level. 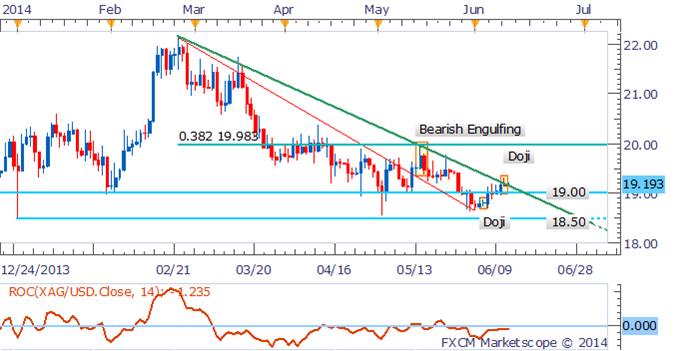 Following the break below the ascending trend channel, copper has found a floor near the 50% Fib Level at 3.03. The Hammer formation failed to see much follow-through, casting doubt on the potential for a bounce. A recovery would likely be met by sellers sitting at the 3.10 mark. 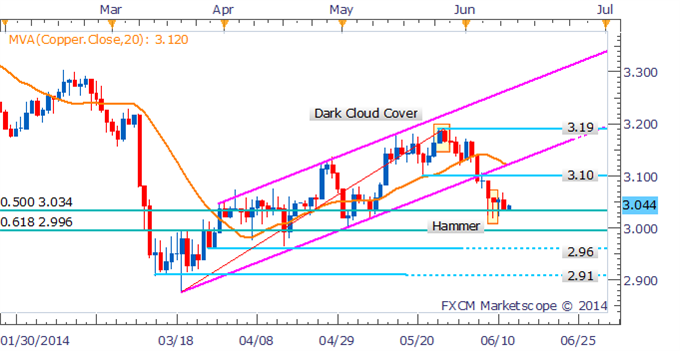 As suggested in recent commodities reports a test of the Feb 2011 high at $861 looked achievable. The precious metal’s push higher has been supported by several bullish technical signals including the presence of an uptrend on the daily (signaled by the 20 SMA and ascending trend channel). A daily close above 861 would open the psychologically-significant $900 handle. 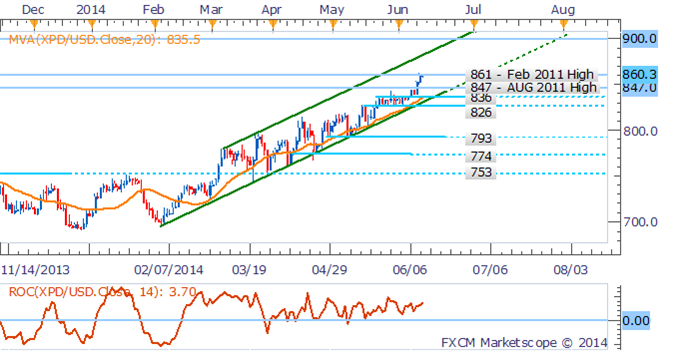 Platinum may be primed for a pullback as a Doji near the range-top at $1,489 signals hesitation from the bulls. Additionally, a cross back below the 60 level by RSI as well as ATR hitting a multi-year low suggests the recent range may remain intact. Declines are likely to be met by buying support at 1,424. 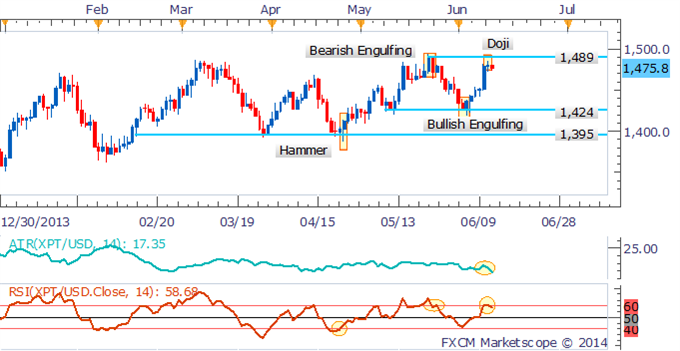