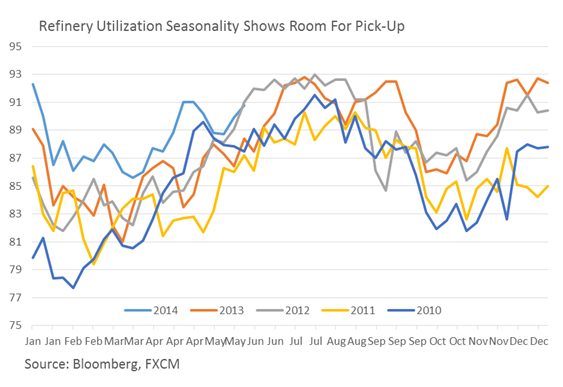 Crude oil continues to tease traders near a key technical level at $105.00 ahead of the weekly Department of Energy inventories figures due in the session ahead. Meanwhile, platinum posted its largest daily percentage gain since January 2nd, as supply disruption fears continue to bolster prices. Finally, gold and silver may be afforded some breathing room if upcoming US Advance Retail Sales data fails to stir the US Dollar bulls.

WTI has retreated after a test of the critical 105.00 handle, as traders likely take to the sidelines ahead of upcoming inventories data, which may offer some cues for the commodity. The Weekly Petroleum Status Report from the DOE is tipped to show that total crude stockpiles declined by 2,000 barrels for the week according to the median estimate from economists. This would mark the second consecutive drop in inventory levels, which likely comes as refineries boost their operations to support increased demand.

With crude production levels and total stockpiles still near their recent highs, US crude supply still appears abundant. A continued pick-up in refinery utilization is needed in order to mop-up the current glut, which looks possible given current levels remain shy of their seasonal peaks in prior years (see chart below).

Also in the energy commodities space; natural gas prices suffered a 2.48 per cent drop during the most recent trading session. Newswires associated the decline to expectations for warmer US weather conditions over the coming months. The plunge comes ahead of the release of storage figures from the Energy Information Administration (EIA) due on Thursday. While the prior reading revealed the largest weekly increase in inventories since May 2009, the upcoming figures are tipped to show a more modest rise of only 109 billion cubic feet.

Total storage levels are presently sitting at 1,499 billion cubic feet, which is well below the 10 year monthly average for June of 2,406 bn. With supplies below their historical average, there does not appear to be a glut in the natural gas market at this stage, which suggests that a pullback for prices may prove transient.

Concerns over supply disruptions from South Africa, the world’s largest producer of platinum, continue to push prices higher for the precious metal. Reports from newswires of a breakdown in negotiations between striking workers in the country’s platinum belt and producers of the metal fuelled gains of over 2 percent for the trading session. Meanwhile palladium, which is mined together with platinum, soared to the highest level since February 2011.

As noted in recent reports, the ongoing strike shows little signs of resolution at this stage, which may continue to support prices over the short-term. However, ultimately a deal to end the 5-month long saga could quickly lead to an unravelling of fear-driven positioning, which leaves the precious metals vulnerable to a pullback. Indeed, ETF holdings for the commodities recently hit record highs, suggesting much of the gains have been due to speculation, rather than higher demand for industry use. 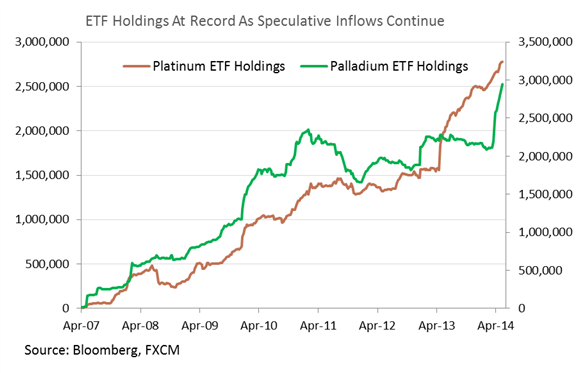 While platinum and palladium have stolen the limelight in the precious metals space, gold and silver may also be afforded some gains if upcoming US data fails to stir the greenback bulls. An absence of major economic news-flow from the world’s largest economy has left the US Dollar to slumber, which in turn has likely helped silver edge back above the critical $19.00 handle in recent trading.

An examination of US-centric event risk on the economic calendar reveals few potential catalysts for a USD rally. The Advance Retail Sales figures for May headline the docket. However, any reaction from the greenback to a surprise reading may prove short-lived, given the data is unlikely to create a major shift in Fed policy expectations.

WTI is once again teasing traders near the psychologically-significant 105.00 handle, which follows a push off the 101.30 mark. Additional support has been provided to the commodity by the ascending trend line from the 2014 low, which has resulted in the appearance of a triangle formation. A daily close above 105.00 would open up the next definitive level near 108.40. However, if we see another bearish reversal candlestick pattern emerge, it would suggest a potential pullback to the trendline support. 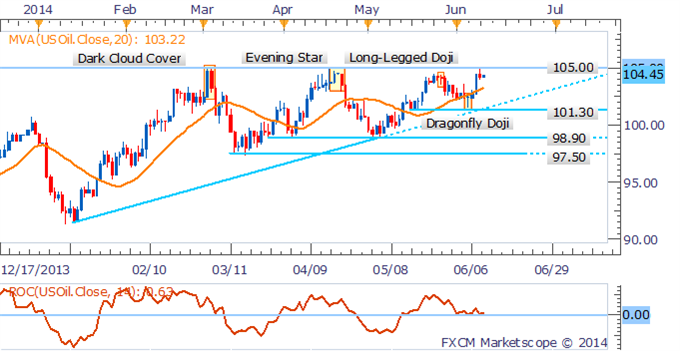 Several bearish technical signals remain for gold despite the recent recovery. These include the presence of a downtrend signaled by the 20 SMA, as well as the Rate of Change indicator suggesting strong downside momentum. A correction is likely to be met by buying support at the nearby 1,258 mark, while rallies may encounter resistance at the 23.6% Fib Level at 1,276. 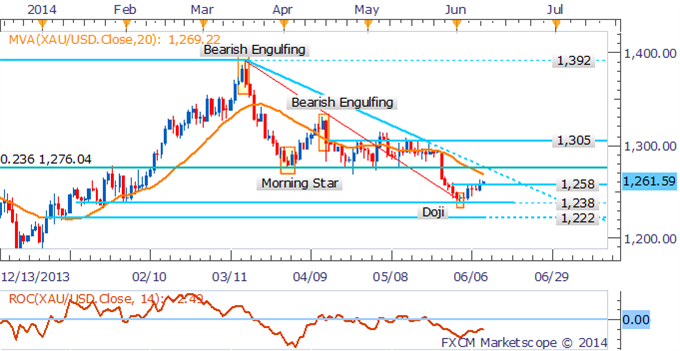 The critical 19.00 handle has been breached in recent trading as the silver bulls stage a modest return. However, a daily close above the descending trend line would be required before suggesting the potential for a further recovery. Sellers are likely to return at the former range-top at 20.00. 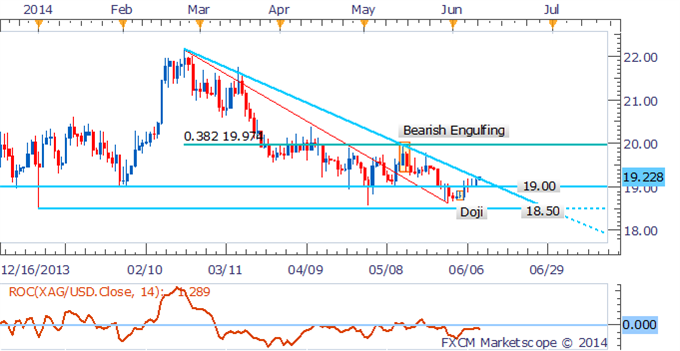 Following the break below the ascending trend channel, copper has found a floor near the 50% Fib Level at 3.03. The emergence of a Hammer formation suggests that the bulls may look to stage a return. However, at this stage the candlestick reversal pattern is yet to see much follow-through. A recovery is likely to be met by sellers sitting at the 3.10 mark. 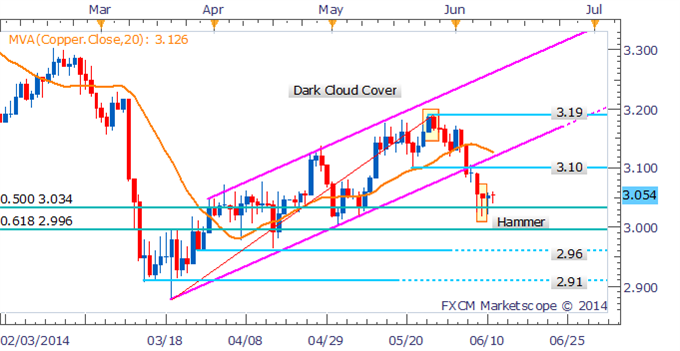 As suggested in recent commodities reports Palladium was eyeing a run on the August 2011 high at 847. Several bullish technical signals remain for the precious metal including the continued presence of an uptrend on the daily (signaled by the 20 SMA and ascending trend channel). The daily close above 847 opens the next definitive level at the Feb 2011 high of 861. 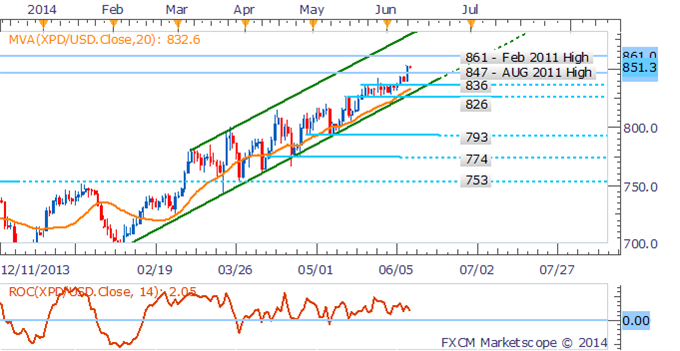 Following the bullish candlestick pattern near support at 1,424 platinum looks to be making a run at the range-top near 1,489. Traders should note that the ATR is currently near multi-year lows and that anemic levels of volatility generally favor range-trading strategies. 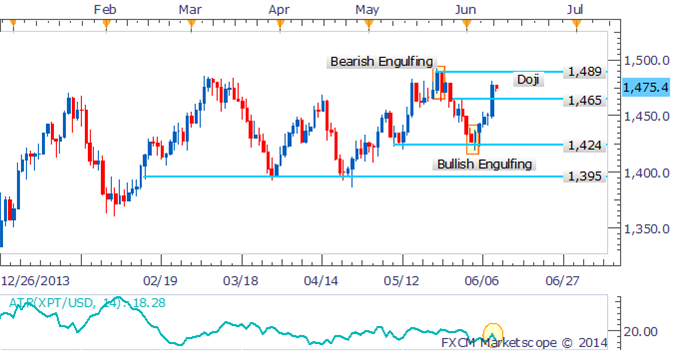