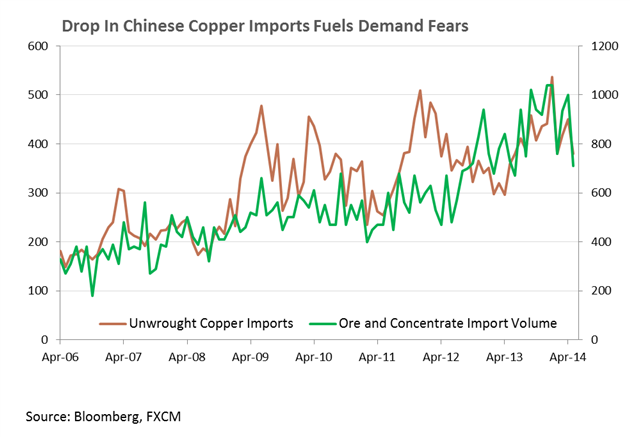 Crude oil is edging towards the critical $105.00 handle in early European trading, ahead of the release of US inventories data due later in the week. Meanwhile platinum and palladium prices have soared on fears over further supply disruptions from South Africa, as the mining workers strike lingers. Finally copper prices continue to crumble, likely on the back of demand concerns from China with fresh economic data from the Asian giant on tap over the remainder of the week.

Crude oil hit the highest level since March 3rd as traders pushed prices towards the psychologically-significant $105.00 mark. Speculation over a bullish reading from upcoming inventories data may be offering some support to the commodity. The Department of Energy’s Weekly Petroleum StatusReport due on Wednesday is tipped to reveal a further decline in total crude stockpiles by 1,500 according to the median estimate from economists.

The recent fall in total crude inventory levels may reflect a rise in demand, which has acted to mop up some of the excess supply witnessed earlier in the year. A further decline in stockpiles would likely be taken as a bullish signal for the growth-sensitive commodity.

A breakdown in negotiations to end the 5-month long mining strike in South Africa’s platinum mining belt has likely bolstered prices for the precious metal in recent trade. Platinum soared by more than 0.8 per cent in late Asian trading, while palladium jumped to the highest level since August 2011. The ongoing strike has created fears over supply disruptions, given that South Africa accounts for roughly 70% of global platinum production, and is the world’s second-largest palladium producer. While at this stage a resolution to the standoff remains out of reach, an eventual deal could cause traders to unwind fear-driven positioning and leave platinum vulnerable to a pullback.

Copper has come under further selling pressure in Asian trading today, likely on the back of concerns over falling demand from China. Recent trade figures from the manufacturing powerhouse revealed a decline in ore and concentrate imports for copper to the lowest level since 2012. With a raft of economic data from the Asian giant on tap over the remainder of the week, the growth-sensitive commodity may face further falls on a set of downside surprises. Indeed, the drop in Chinese Industrial Production figures for April to the lowest level since 2009 did little to inspire confidence in the country’s commodities appetite.

WTI is once again teasing traders near the psychologically-significant 105.00 handle, which follows a push off the 101.30 mark. Additional support has been provided to the commodity by the ascending trend line from the 2014 low, which has resulted in the appearance of a triangle formation. A daily close above 105.00 would open up the next definitive level near 108.40. However, if we see another bearish reversal candlestick pattern emerge, it would suggest a potential pullback. 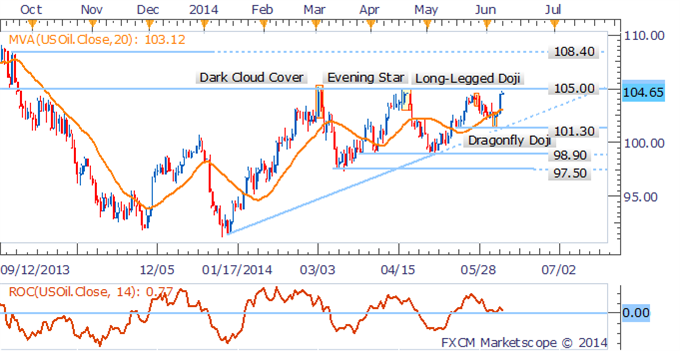 The gold bears are keeping the precious metal capped below resistance at 1,258 for now. Several bearish technical signals for the commodity are hinting at a retreat back towards support at 1,238. These include the presence of a downtrend signaled by the 20 SMA, as well as the Rate of Change indicator suggesting strong downside momentum. 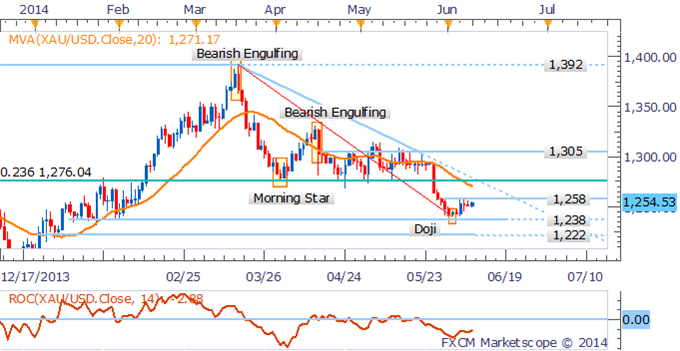 The critical 19.00 handle has been breached as the silver bulls stage a modest return. However, a daily close above the descending trend line would be required before suggesting the potential for a further recovery. 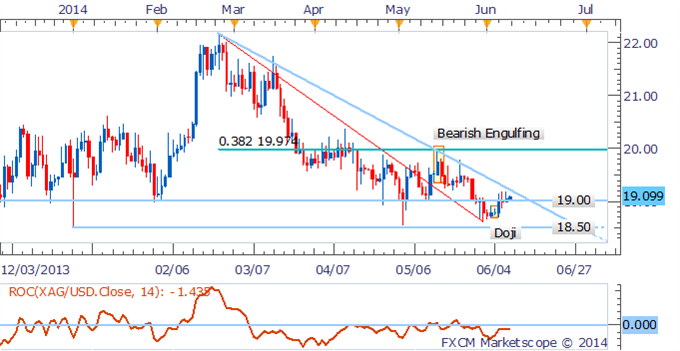 Copper prices have continued to crumble following the break below the ascending trend line and support at 3.10. The collapse occurred following the emergence of a Dark Cloud Cover candlestick pattern near resistance at 3.19. Some tentative buying support appears to be at the 50% Fib Retracement level at 3.034, which has created a Hammer formation on the daily. However, the bullish reversal pattern would need to see confirmation from a successive up day before being confirmed. 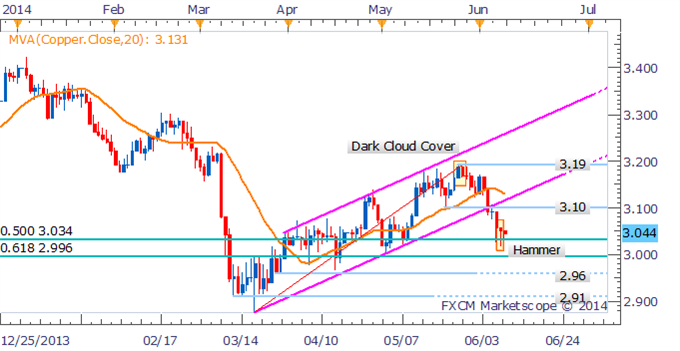 As suggested in recent commodities reports Palladium was eyeing a run on the August 2011 high at 847. Several bullish technical signals remain for the precious metal including the continued presence of an uptrend on the daily (signaled by the 20 SMA and ascending trend channel). A daily close above 847 would open the next definitive level at 861. 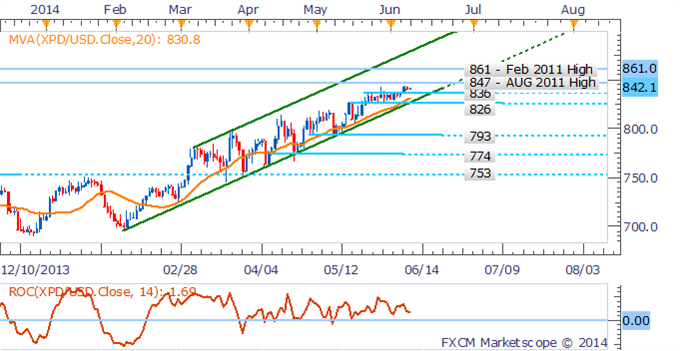 Following the bullish candlestick pattern near support at 1,424 platinum looks to be making a run at the range-top near 1,489. Traders should note that the ATR is currently at multi-year lows and that anemic levels of volatility generally favor range-trading strategies. 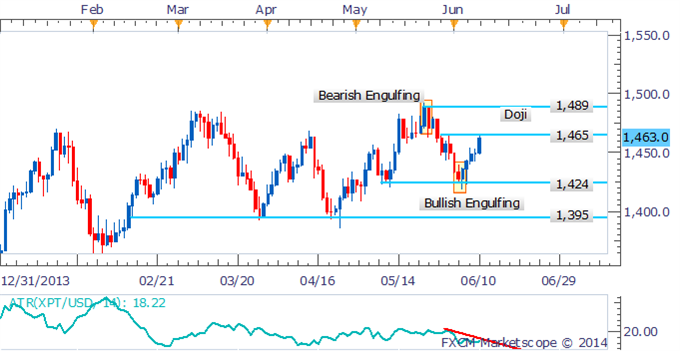