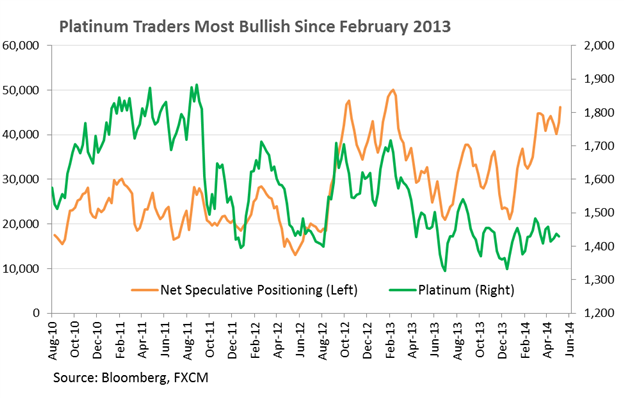 Platinum and palladium have edged out fresh 2014 highs as geopolitical risks raise concerns over supply disruptions for the precious metals. Meanwhile a busy US economic docket next week could offer some support to gold and silverand put pressure on crude oil if data misses expectations.

A relatively light economic docket in the session ahead may fail to stir volatility in the commodities space. With US New Homes Sales figures as the headline event out of the US, the medium-tier economic data is unlikely to catalyze a major shift in sentiment. While commodities exchanges will be closed on Monday for the Memorial Day holiday, the remainder of the week is loaded with noteworthy event risk which includes revised US first quarter GDP figures, Consumer Confidence data, and Durable Goods Orders (times available on the economic calendar here).

The secondary estimate for US GDP is tipped to reveal an annualized decline of 0.6 per cent, which would be the weakest pace of economic growth since Q1 2011. Similarly Durable Goods Orders may do little to inspire confidence in the health of the US economy, with economists expecting a drop of 0.7 per cent for the leading indicator. Disappointing readings from both measures would likely weigh on the growth-sensitive commodities including crude oil, based on speculation of reduced demand. Downside surprises would also put pressure on the US Dollar, which in turn could offer some support to gold prices.

While gold and silver have been uninspired of-late, platinum and palladium have continued their ascent in recent trading. Palladium rose for its 5th straight session on Thursday with prices hitting the highest level since August 2011. The precious metal has risen by roughly $118.00 this year, putting the year-to-date percentage gain at close to 16.5 percent.

As noted in recent commodities reports; one of the likely drivers behind the boost to the precious metals is the ongoing fear over potential supply disruptions from two of the commodities largest producers; Russia and South Africa. The 18-week long mining workers strike in South Africa’s platinum belt has continued to crimp production of the metal. Newswires reported on Thursday that another miner in the region had been killed for trying to return work, which comes as the latest in a series of casualties associated with the strike.

Meanwhile ongoing tensions in Eastern Europe have added an additional source of concern over palladium supply. This comes as the West mulls further sanctions against Russia, which accounts for roughly 40% of the commodity’s production. However, if we see a de-escalation in the region, fears over supply disruptions may prove unfounded which could in turn lead to an unwinding of long positioning in the precious metals. This leaves platinum particularly vulnerable given net positioning amongst speculative traders is at the highest level since February 2013.

WTI has cleared notable resistance at 102.30 as several bullish technical signals suggest a push towards 105.00 may be on the cards. Building upside momentum reflected by the Rate of Change Indicator, as well as prices holding above the 20 SMA suggests the emergence of a short-term uptrend. However, traders should be mindful that the ATR indicates volatility remains low, which generally favors range-trading strategies. Of additional consideration is the Doji candlestick that has emerged on the daily, which suggests some caution from the bulls. 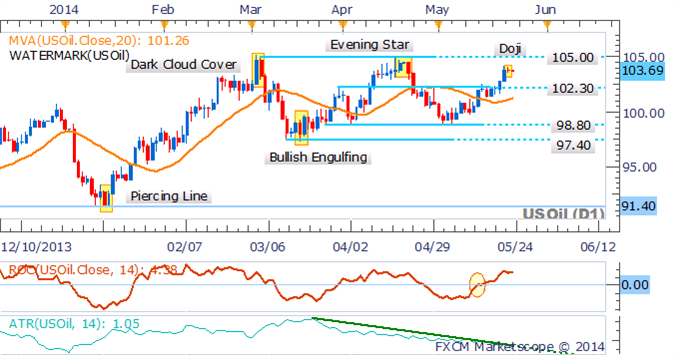 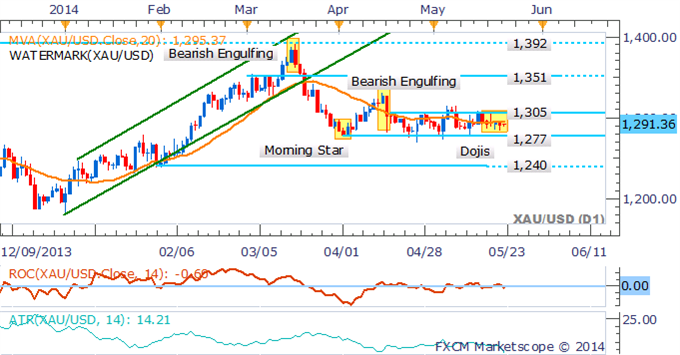 Silver prices have resembled a tennis match of-late with prices swinging between $19.00 and $19.70. With the ATR and ROC indicators suggesting low volatility and a lack of momentum respectively, range-trading strategies are preferred. 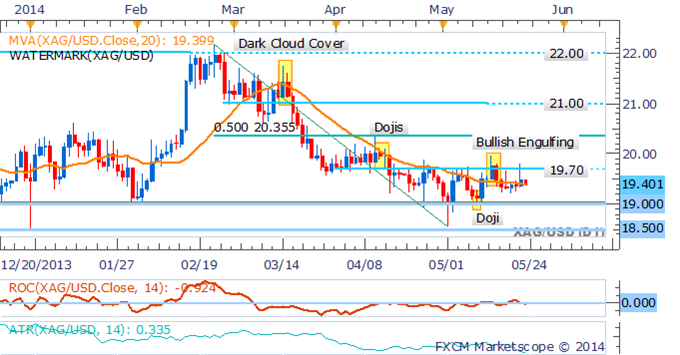 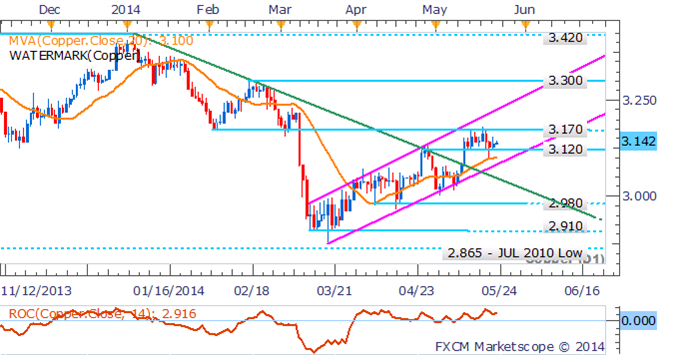 Palladium has bounced off trendline support as the uptrend for the precious metal remains in force. Clearance of $826 opens up the August 2011 high near $847. 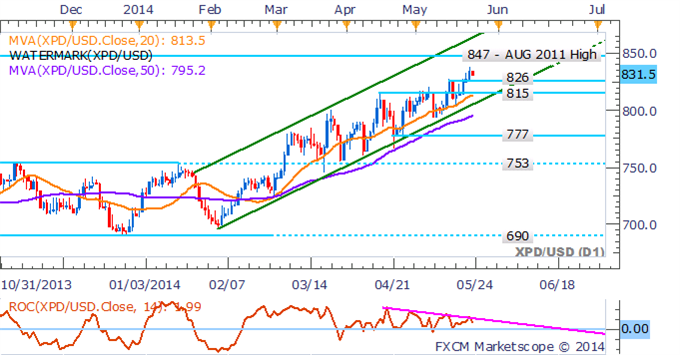 Platinum has continued its ascent following a re-test of the descending trendline from April 2013. While there is some selling pressure evident near $1,486, an uptrend and positive momentum (signaled by the ROC indicator) suggests the potential for further gains. The next noteworthy resistance level is some distance away at the September 2013 high of $1,535. 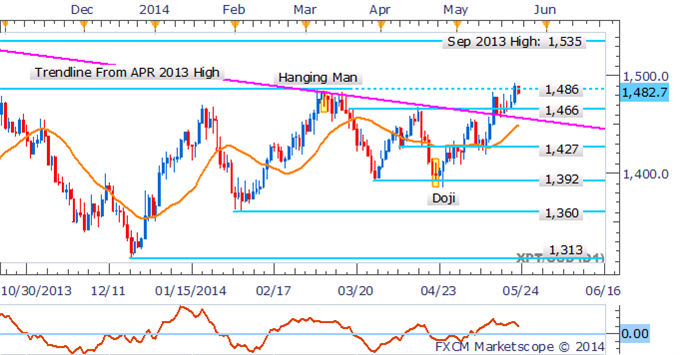