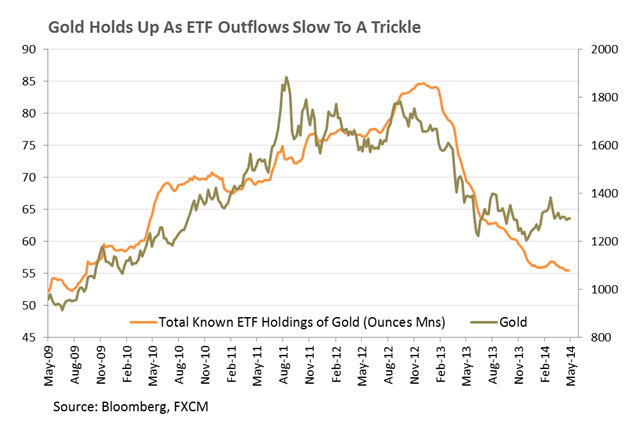 Gold and silver continue to tease traders near key resistance zones as a push higher for the US Dollar counteracts safe-haven demand for the precious metals. Looking at longer-term drivers for the yellow metal; a continued slowing of gold ETF outflows may afford the commodity some breathing room. Additionally, following the Indian national election if restrictions on imports intothe world’s second largest consumer of the metal are relaxed, it could boost demand for gold over the longer-term. Meanwhile, over the session ahead a light economic docket may leave the commodities space uninspired and recent ranges could persist.

Traders continue to question what could cause the next leg lower for gold prices. While the precious metal suffered the largest percentage fall since 1981 last year, the commodity’s decline has halted over recent weeks. One source of support has likely been the ongoing tensions in Eastern Europe, which has bolstered safe-haven demand for bullion. However, an additional consideration is the diminished outflows from gold ETFs. A veritable torrent of investors heading for the exits last year has slowed to a trickle in recent months.

The slowing of outflows may suggest the initial hot-money fleeing from the alternative asset has faded, and there is some potential for gold to remain supported going forward. This comes as equities and bonds appear relatively expensive, with current levels for US equity benchmarks looking a little lofty, and unattractive yields on fixed income assets.

Restrictions on gold imports into India introduced last year did little to boost the demand outlook for bullion. Indeed a report from the World Gold Council released today showed gold demand from the world’s second largest consumer of the metal, plunged by roughly 41 percent from Q1 2013 to Q1 2014. However, the recent landslide victory by the NDA party in India’s national elections has bolstered speculation that the new government may lift the restrictions on gold, which would bode well for bullion demand over the near-term. 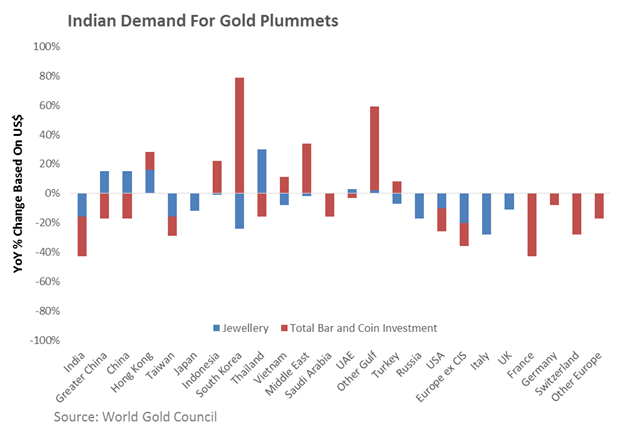 Thin Docket Offers Little Event Risk In The Session Ahead

Market-shifting event risk looks relatively scarce in the session ahead, which may leave the commodities space to continue their directionless drift. Potential catalysts that could cause of shift in gears for the major commodities later in the week include the FOMC April Meeting Minutes as well as China HSBC Flash Manufacturing PMI data. A hawkish lean from Fed officials may help the recovery in US yields gain traction, which could put pressure on the precious metals. While a disappointing Chinese manufacturing reading would likely weigh on growth-sensitive commodities including copper. Full details available on the economic calendar here. 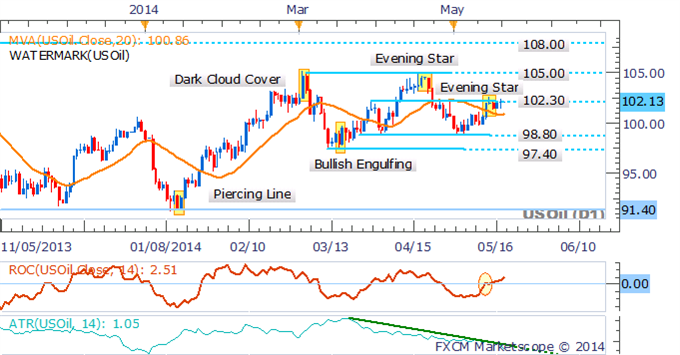 Gold’s recent range between $1,277 and $1,305 persists which may afford short-term range-trading opportunities on either side of the narrow corridor. A lack of momentum signaled by the Rate of Change indicator, as well as low volatility levels (reflected by the ATR) and several Doji formations suggest the consolidation may continue. 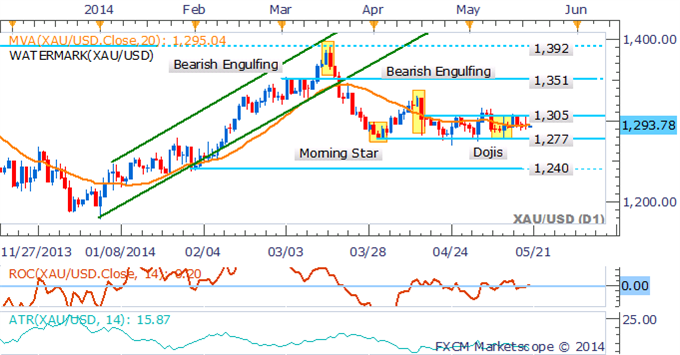 The Bearish Engulfingcandlestick pattern on the daily chart for silver is warning of a pullback for the precious metal to critical support at $19.00. 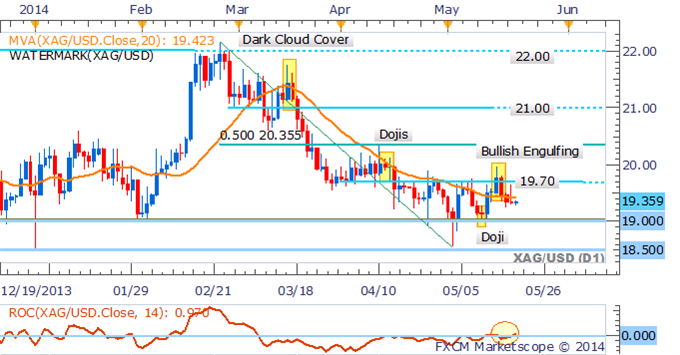 The copper bulls have regained their grip on prices following some signs of hesitation near resistance-turned-support at $3.149. With the base metal remaining in an uptrend alongside building positive momentum, longs are preferred with a target offered by the 61.8% Fib retracement level near $3.213. 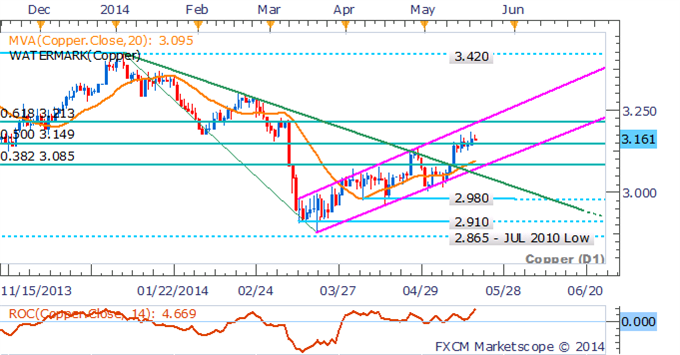 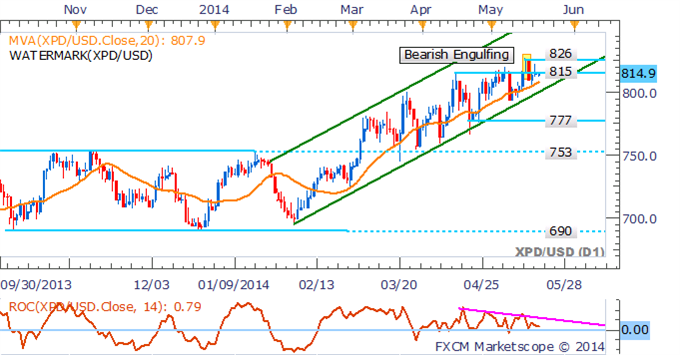 Platinum is at a critical juncture as the precious metal retests its descending trendline from the April 2013 high. As is often the case, a retest helps confirm the original breakout and this instance validation would leave a preference for longs. However, a Dark Cloud Cover pattern near $1,486 is warning of a continued pullback. 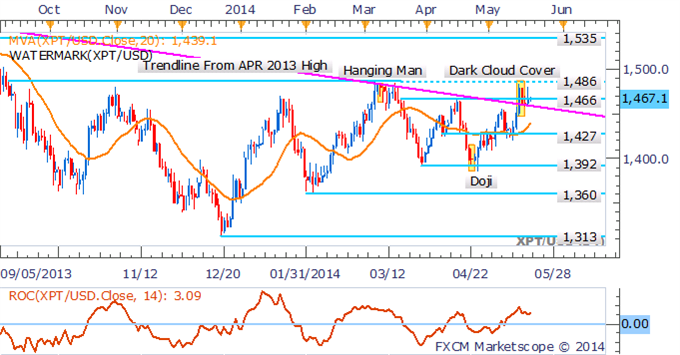