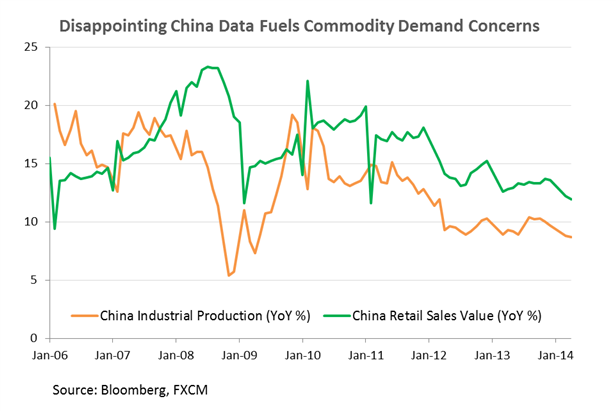 Disappointing Chinese economic data has put pressure copper prices today, as traders weigh the potential for a slowdown in growth to crimp the Asian Giant’s appetite for base metals. Meanwhile, gold and silver’s recent recovery may be under threat from an upside surprise to upcoming US Retail Sales data via the US Dollar side of the equation. Similarly, continued concerns over a supply glut in the US oil market may weigh on crude oil prices as WTI struggles below the $101.00 handle.

Weaker-than-anticipated Chinese Retail Sales and Industrial Production figures for April have put pressure on copper prices during Asian trading. As a leading indicator for economic activity, the drop in Retail Sales growth to the lowest level since 2011 has likely fuelled further concerns over a potential slowdown in Chinese economic growth. Additionally, the 5th consecutive decline for the growth in industrial production represents a worrying trend, that if continued may lead to lower demand for commodities from the Asian giant. Further speculation over a deceleration in the country’s economic growth could leave copper vulnerable to a correction.

Tensions in Eastern Europe remain on traders’ radars as the ongoing Ukrainian crisis continues to create safe-haven demand for gold and silver. While the latest developments in the region suggest a resolution at this stage remains unlikely, the absence of an escalation may leave gold vulnerable to renewed selling pressure.

In the session ahead the precious metalsmay find some additional guidance from US Advance Retail Sales figures, given an upside surprise may aid the US Dollar’s recent recovery. While we saw some anemic first quarter US GDP figures, recent improvements in leading indicators like Retail Sales and ISM Non-Manufacturing data hint at a recovery in the second quarter. Optimism about future growth prospects could lead traders to move out of US Treasuries, which would boost 10 year yields and offer some support to the greenback.

WTI continues to struggle below the $101.00 handle which has acted as a ceiling for prices since the beginning of the month. The lift in other risk-sensitive instruments like US equity benchmarks has failed to put the wind in crude oil’s sails as a glut in US oil inventories suppresses prices. As noted in prior commodities updates; near-record levels for crude oil stocks and exponential growth in production casts a bearish shadow over crude oil. Expectations of a significant in lift in domestic demand would be required to change the overall outlook for the oil price.

Crude Oil: Waiting For Break Below $100 For New Shorts 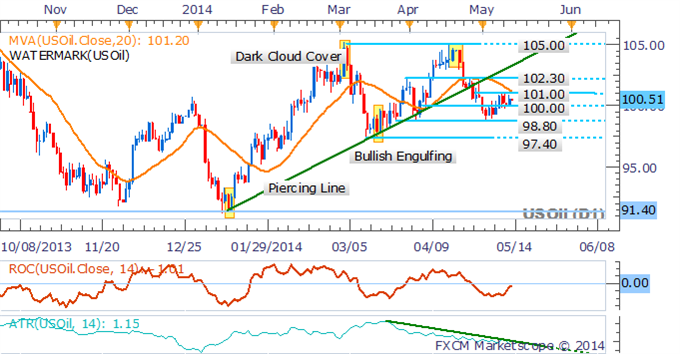 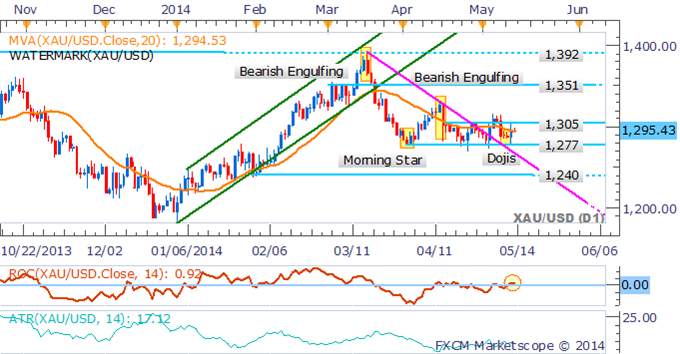 A Doji on the daily chart for silver denotes trader indecision near the all-important $19.00 handle. While there are warnings of a potential reversal in the trend, notable selling pressure near $19.70 may continue to cap gains for the precious metal. Additionally, low levels of volatility suggested by the ATR alongside fading downside momentum also hint at a more range-bound market environment for the precious metal. 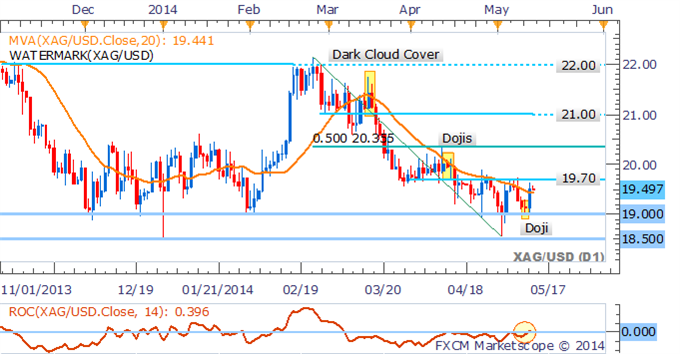 Copper has vaulted above its descending trendline from the 2014 high and cleared a notable resistance level at $3.085. With building upside momentum (as suggested by the rate of change indicator) and prices above the 20 SMA a bullish technical bias is offered. A break above the $3.149 mark would open an extended advance on the $3.213 (the 61.8% Fib Retracement level). 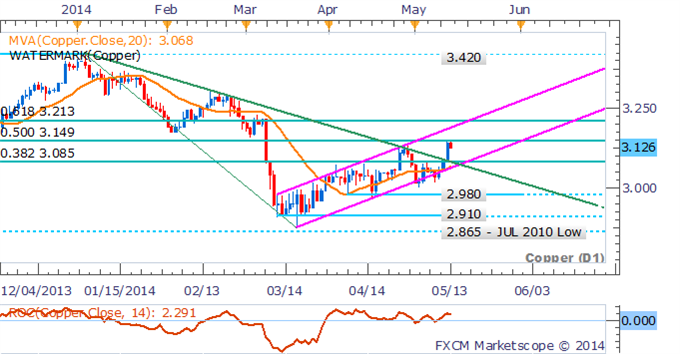 Palladium prices are being squeezed between trendline support and resistance near the 2014 high at $815. This puts the precious metal at a critical juncture. A break below the ascending trend channel would support a bearish bias with a target offered by the $777 mark. 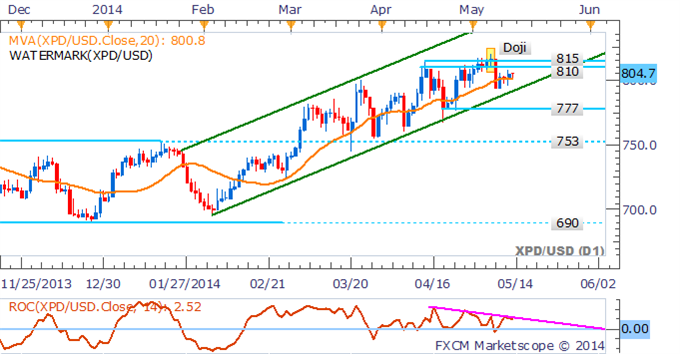 Platinum continues to be supported above the $1,427 mark as upside momentum (as reflected by the rate of change indicator) begins to build. Recent price action has failed to confirm the Evening Star formation, and as such a bounce back to trendline resistance may be on the cards.

Platinum: Pushes Back Towards Trendline Resistance 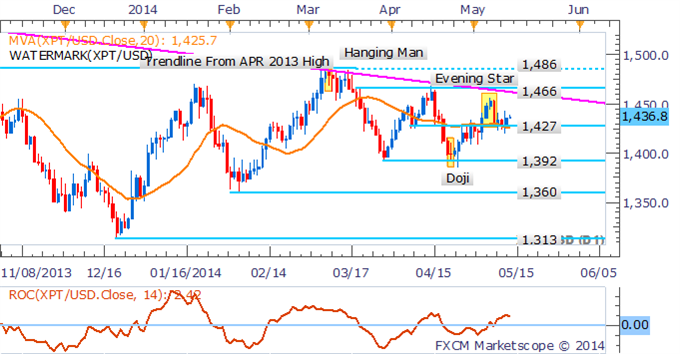