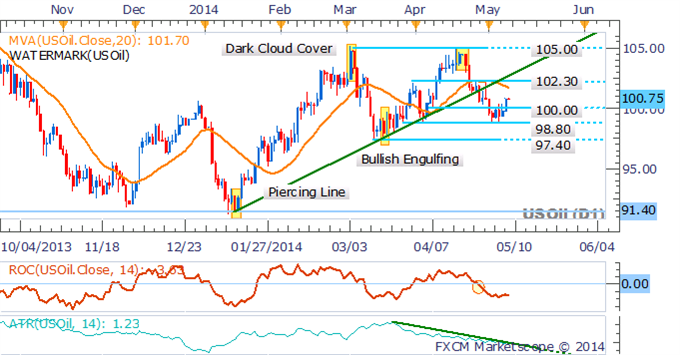 Gold and silver have stabilized in Asian trading after plummeting overnight as ebbing geopolitical tensions and an upbeat tone from Fed Chair Janet Yellen weighed on prices. Meanwhile positive investor sentiment and a reported drop in crude oil inventories have pushed WTI above the psychologically-significant $100 a barrel handle. A light US economic docket heading into the end of the week leaves the commodities space to take cues from broader-risk trends, which may leave oil prices exposed to a pullback.

As noted in recent commodities reports; two key drivers continue to offer guidance to gold prices, namely geopolitical risks and Fed policy expectations via the US Dollar. The yellow metal received negative cues from both sources overnight likely leading to the largest daily percentage drop in prices since April 15th.

Newswires reported that Russian President Vladimir Putin has requested the withdrawal of troops from the Eastern Ukrainian border. The latest developments in the ongoing crisis may have acted to ease concerns over a further escalation in the region, which has likely sapped safe-haven demand for the precious metals. While a resolution to unrest may be out of reach for the time-being, an easing of tensions may tempt traders into a further unwinding of fear-driven positioning in gold.

An optimistic view on the US economy from Fed Chair Janet Yellen in her testimony to the Joint Economic Committee helped the ailing US Dollar to recover some ground overnight, which in turn put further pressure on gold and silver.

However, Dr. Yellen’s testimony hardly offers the panacea needed to ail the greenback’s recent woes. Her cautious comments on rate increases in particular have failed to materially lift US 10 year yields. Until we see a more aggressive stance from policy officials on a potential rise for borrowing rates in the US the reserve currency may continue to flounder, which is a positive for gold prices.

Crude Exposed To Souring Of Sentiment

An unanticipated drop in US crude oil inventories as reported by the Department of Energy overnight helped WTI break above the $100.00 a barrel handle. However, much of the gains occurred alongside a rally in US equity benchmarks, suggesting broader investor optimism about the US economy may have helped contribute to the rise in prices.

With a light US economic docket heading into the end of the week, crude may look to take its cues from broader risk-trends. The 20 day correlation between the S&P 500 (used as a proxy for investor sentiment) and crude oil has strengthened to 0.2415. While the relationship is notably weaker than earlier in the year, investor sentiment may still hold some influence over prices. With US equities trading shy of record highs and recent wobbles suggesting signs of exhaustion from the bulls, a correction may be on the cards, which would likely bode ill for WTI.

Gold has pulled back to retest its descending trendline on the daily. As is often the case, a retest will help confirm whether prices may continue in the initial breakout direction. Buyers are also likely to emerge at the $1,277 mark, which has acted to support prices for the past month. Of additional consideration is the ATR reflecting low levels of volatility which generally suits range-trading.

Gold: Drops Below $1,305 To Retest Trendline 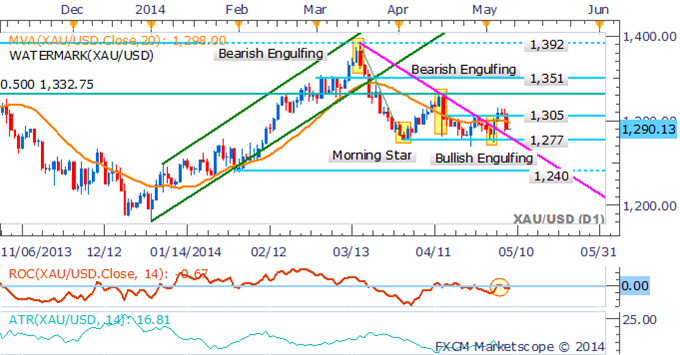 The Morning Star pattern on the daily chart has failed to stir the silver bulls as prices retreat back towards the all-important $19.00 handle. The pullback has negated earlier indications of a potential uptrend emerging on the daily which precludes a bullish technical bias at this stage. 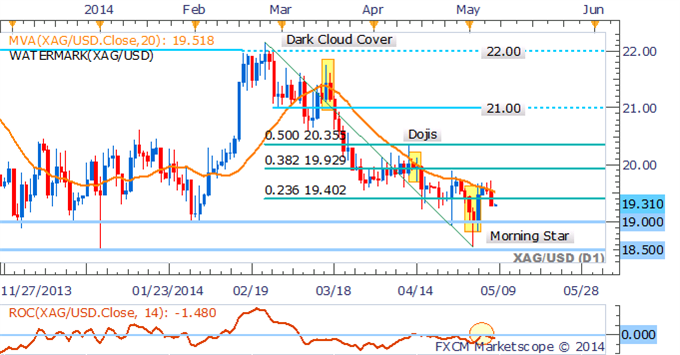 Copper prices have pushed outside the ascending trend channel on the daily as price action hints at the possible emergence of a downtrend. The ROC indicator’s tick into negative territory also suggests the bears are looking to stage a return. Buying support likely rests at the $2.980 mark. 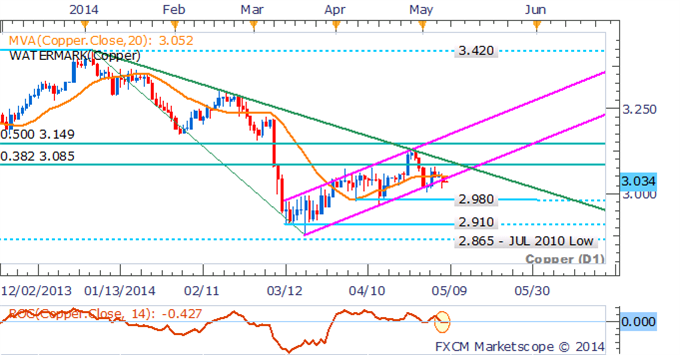 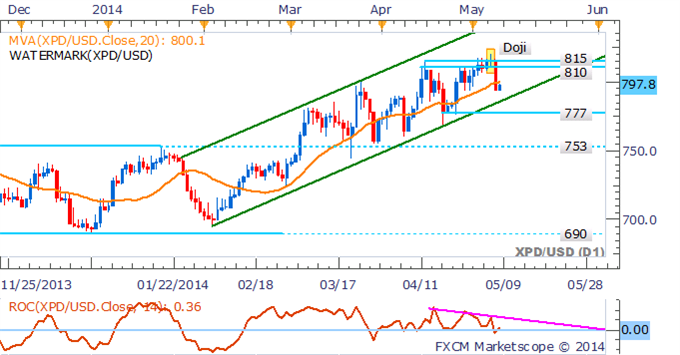 A bearish reversal signal has emerged for platinum following the plunge in prices overnight. The Evening Star formation may hint at further declines if confirmed by a successive down-day and daily close below nearby support at $1,427. 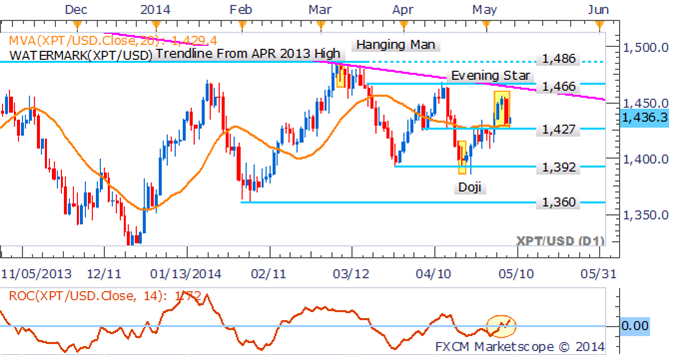