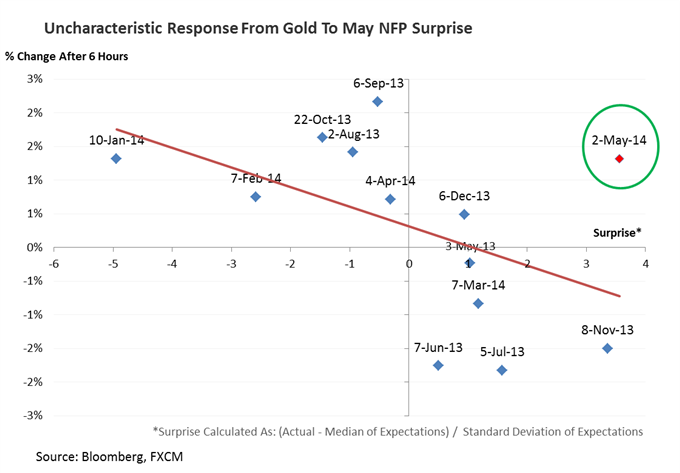 Gold Probes Above $1,305 As US Dollar Continues Its Slumber

Gold is edging higher in Asian trading with the yellow metal probing above a key technical level of resistance at $1,305. The push higher follows an uncharacteristic response to Friday’s US Non-Farm Payrolls figures that saw gold post its biggest percentage gain since April 4th. Further strength may be afforded to the precious metals as the US Dollar continues its slumber ahead of US ISM Services figures and testimony from Fed Chair Janet Yellen. Meanwhile, the base metals including copper remain vulnerable to disappointing Chinese economic data with a busy docket for the Asian giant in the week ahead.

As noted in Friday’s commodities report, gold generally faces significant volatility surrounding the release of the monthly US jobs report. Past upside surprises have historically been met by a stronger US dollar and a weaker gold price, likely due to expectations for less dovish Fed policy. However, despite the April reading of 288K posting significantly above expectations of 218K, gold rallied by the most in more than a month. The uncharacteristic reaction is highlighted by the chart below that shows the commodity’s percentage change within 6 hours to the past 13 NFP releases.

The intraday chart of the USDollar Index overlaid with gold (XAU/USD) reveals that prices initially responded as would be expected; with USD strength and weakness for the yellow metal, yet reversed course later in the session. 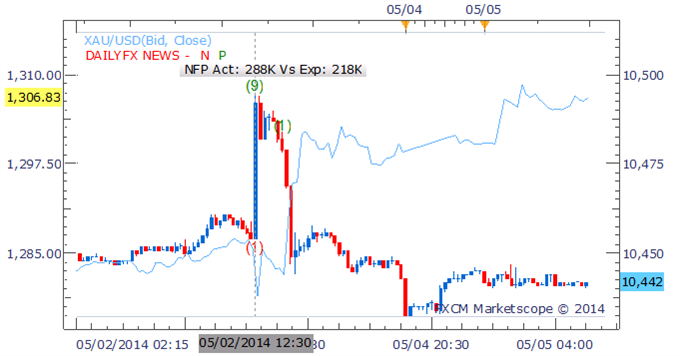 A continued recovery in gold prices would likely stem from two sources: an escalation of geopolitical risks, and a weakening of the greenback. The US dollar’s persistent struggle to gain traction over the past several months may be tied to the enduring low levels for US 10 year yields. Which in turn could be predicated on traders anticipating highly accommodative Fed policy to persist over the near-term, despite the recent improvements in the US labor market. 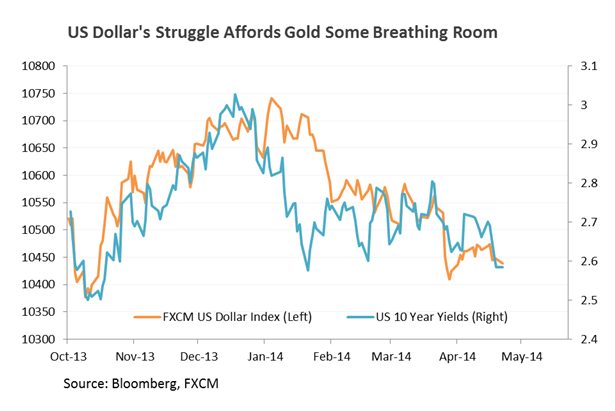 Until we see FOMC officials take a more hawkish stance on borrowing rates, long dated yields may remain suppressed, which could keep pressure on the US Dollar, and allow gold to recover some further ground. This puts the spotlight on Fed Chair Janet Yellen’s testimony to the Joint Economic Committee of Congress later in the week. Gold traders will be hanging off every word from Dr. Yellen, given her prior suggestion that the Fed may raise rates within 6 months “or that type of thing” of finishing its quantitative easing program. Given the market’s unfavorable reaction to her comments the Fed Chief may offer a more timid view on rate rises, which would likely to do little to stir the US Dollar from its slumber.

As mentioned earlier the geopolitical risks posed by the ongoing turmoil in Eastern Europe remain another important consideration for the precious metals. Mounting tensions in the region between Ukraine and Russia helped bolster safe-haven demand for gold and silver during early April. However, investors may be tempted to unwind some of their fear-driven positioning in the absence of a further escalation and a tougher stance from the West on Russia.

Miss From US Services Sector Gauge May Support Gold Prices

Headlining the economic calendar during the coming US session is the April US ISM Non-Manufacturing reading, which is tipped to post a modest rise to 54.0. While readings above 50 are considered in ‘expansionary’ territory, the gauge of strength in the services sector has been trending lower since late 2013. A downside surprise would support a continued highly accommodative stance for US monetary policy, which in turn may keep pressure on the USD and allow gold to hang onto its recent gains. A weaker-than-anticipated print may also signal lower demand for crude oil in the US, which would likely keep WTI prices contained below the critical $100 a barrel mark.

Today’s disappointing reading from the April HSBC China PMI final figure likely led copper lower in early Asian trading. Concerns over a slowdown in economic growth and tighter credit conditions in the Asian Giant have weighed on base metals prices over the past week. This puts copper at a critical juncture ahead of the upcoming Chinese trade balance figures due on Wednesday. Another disappointing print may fuel existing fears over weakening demand from the Asian giant and could lead copper lower. 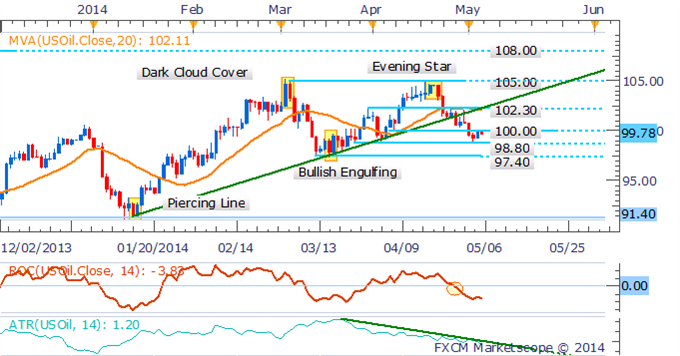 Gold has bounced off key support at $1,277 which has acted to negate several previous bearish technical signals. While a Bullish Engulfing candlestick pattern suggests the potential for continued recovery, we need to close above resistance at $1,305 on the daily before suggesting longs. 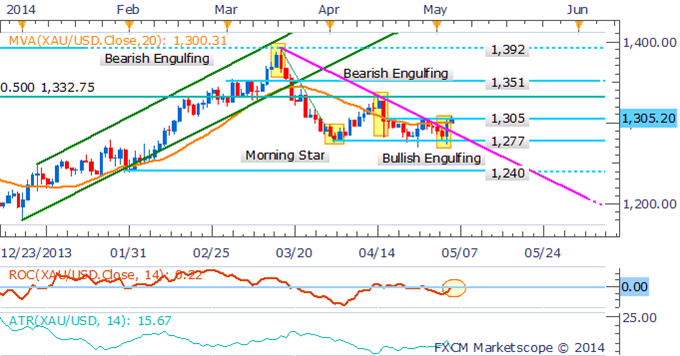 Silver prices have reversed course after teasing at a sustained break below critical support at $19.00. The bounce on Friday has prompted the emergence of a Morning Star candlestick formation that may hint at a further recovery if confirmed by a successive up-day. However, caution is suggested when looking at long positions, given prices remain in a downtrend and notable selling pressure hanging overhead at $19.40/50. 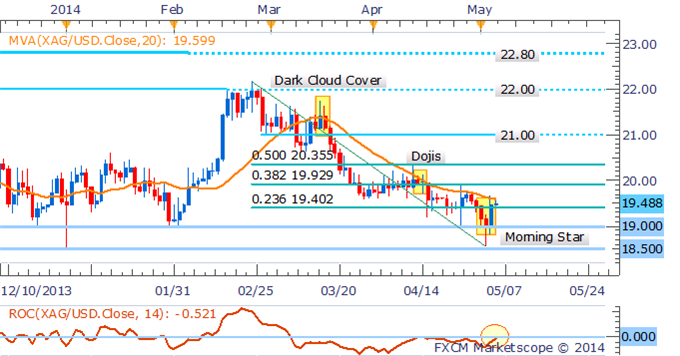 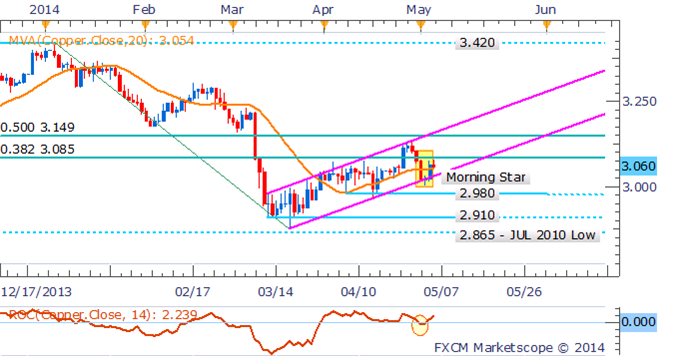 Palladium remains in an upward trend channel following the original breakout above the range-top at $753. However, the 2014 highs near $810/5 continue to cap gains for the precious metal. A break above $810/5 would offer an extended advance to the August 2011 high at $847. 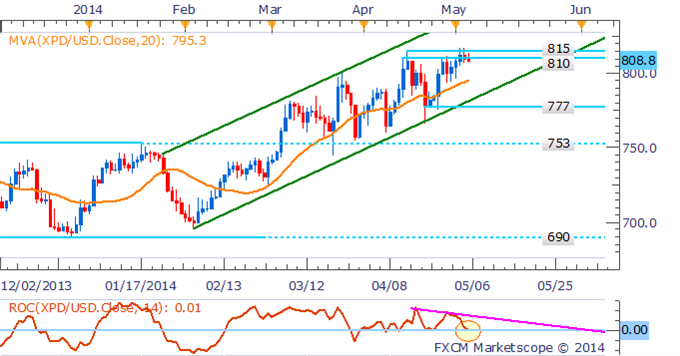 Platinum may be targeting its multi-month range-top near $1,486 following a push above resistance at $1,427 in recent trading. However, traders should be mindful that upside momentum is still lacking as signaled by the rate of change indicator holding below the 0 mark.

Platinum: Pushes Above Resistance At $1,427 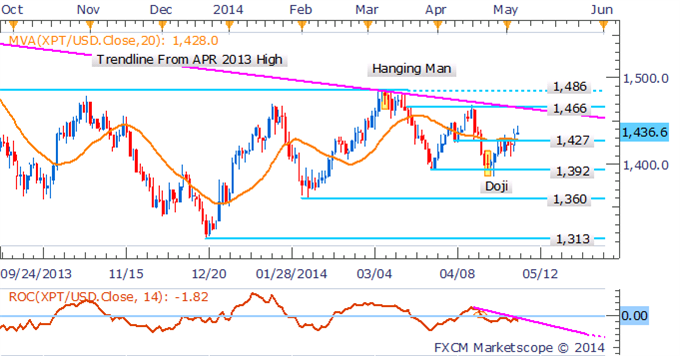