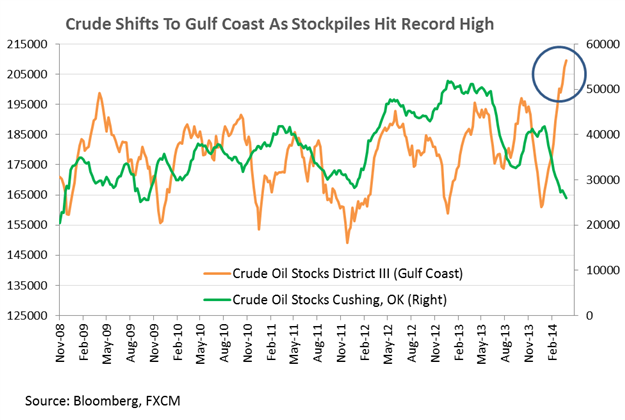 The commodities space is witnessing a sea of red in late Asian trading as the precious metals continue their declines alongside falls in crude oil and copper. Gold and silver may face further weakness in the session ahead if US Q1 GDP beats estimates alongside an upbeat economic outlook in the Fed policy statement. Meanwhile Chinese deceleration concerns could continue to weigh on the base metals if we see a disappointing China Manufacturing PMI print tomorrow.

WTI Aiming At $100 Ahead of Inventories Data

In addition to the raft of US economic data due in the coming hours, crude oil is also likely to take cues from the upcoming DOE Weekly Petroleum Status Report. As noted in prior commodities updates, the emergence of two key trends in the US oil market suggests the potential for further declines for WTI.

Firstly, US production levels for the commodity have hit the highest level since 1988 as the shale gas boom in the Northern parts of the country feed supply. Secondly, while stockpiles at Cushing, OK have fallen, record inventory levels in the Gulf Coast district suggests a glut of supply that refineries may be unable to absorb. The potential for a near-term correction in crude oil prices is made more noteworthy by the near-record levels of net long speculative positions in WTI.

The AprilFOMC rate decision and looming release of policy-shaping pieces of US economic data offer several possible scenarios for gold and silver via implications for the US Dollar and risk trends. A hawkish lean from the Fed’s policy statement alongside upside surprises to first quarter growth figures could bolster expectations for a rate rise from the central bank, which would be bearish for gold prices.

However, policy officials may be inclined to offer a more timid stance on the state of the domestic economy and play down potential rate hikes which would have the opposite effect on gold. This follows on from recent dovish comments from Fed Chair Janet Yellen, which may have been aimed at easing the market’s concerns over her prior suggestion of a rise in borrowing costs within 6 months of the end of QE. In either scenario we’re likely to see some volatility for the precious metals.

As noted in yesterday’s commodities report, the base metals are particularly exposed to mounting concerns of a deceleration in Chinese economic growth and tightening credit conditions. This leaves copper in a precarious position ahead of the official manufacturing PMI figures due from the Asian giant tomorrow. Data on balance out of the tiger economy has been disappointing of-late, and another downside surprise would likely put further pressure on base metal prices. 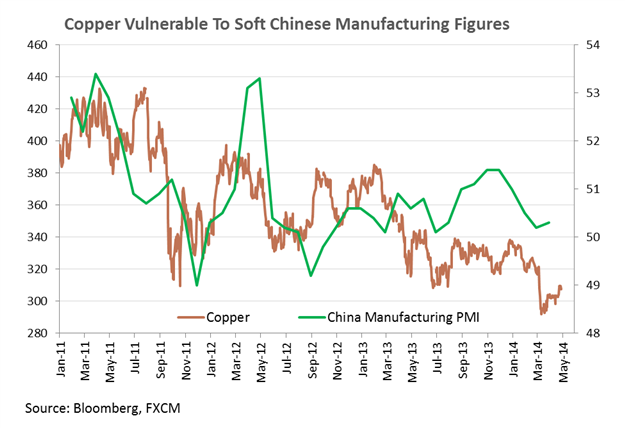 Crude oil has broken below trendline support following the emergence of an Evening Star formation on the daily. Alongside building downside momentum (reflected by the rate of change indicator) and a move below the 20 SMA a bearish technical bias is offered. A close below the psychologically significant $100.00 handle would be seen as an opportunity to enter new short positions. However, we’re also mindful that volatility, reflected by the ATR continues to decline, which generally doesn’t favor breakout trading. 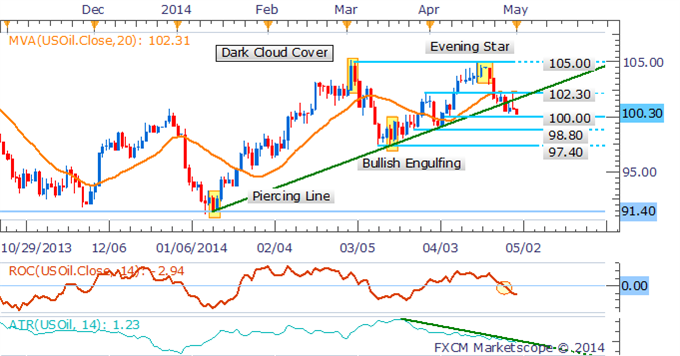 Technical signals for gold are leaning on the bearish end of the spectrum suggesting the precious metal may face a drop to nearby support $1,277 before buyers emerge. This comes after the commodity failed to crack the key resistance near $1,305 which coincided with the third touch and respect of a descending trend line. A break below $1,277 would likely open extended declines towards the next definitive level at $1,240.

Gold: Set For Next Leg Lower As Descending Trendline Holds 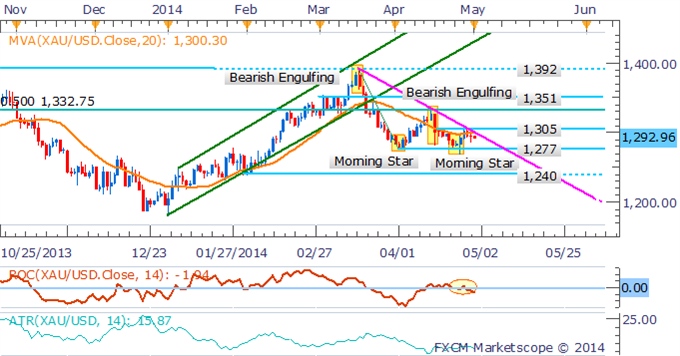 The 23.6% Fib Retracement level near $19.60/70 continues to cap gains for silver. While new shorts near the key resistance level look tempting, a lack of downside momentum signaled by the rate of change indicator does little to reinforce a bearish bias. Buying support is likely to emerge at the all-important $19.00 handle.

Silver: Falls Back From Resistance 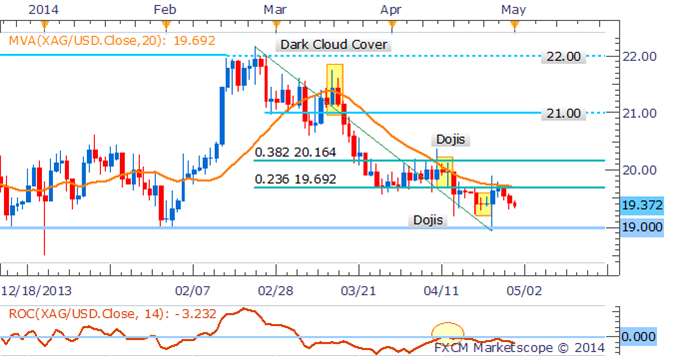 Copper has pulled back from the top its ascending trend channel and cracked the $3.085 mark in recent trading. Although the lower trend channel line may offer some interim buying support, the next definitive level rests at $2.980, which may leave the bulls remain in their pens. This leaves a mixed technical bias for the base metal. 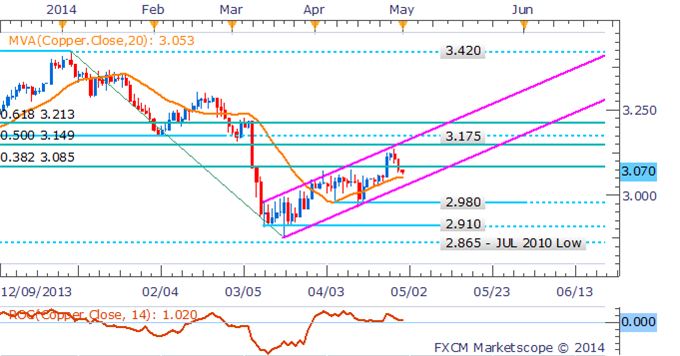 Palladium remains in an upward trend channel following the original breakout above the range-top at $753. However, following a failure to close above critical resistance at $810 and the emergence of a Dark Cloud Cover pattern, a dip looks likely. Buyers may emerge near the lower trend channel line and $777 level. 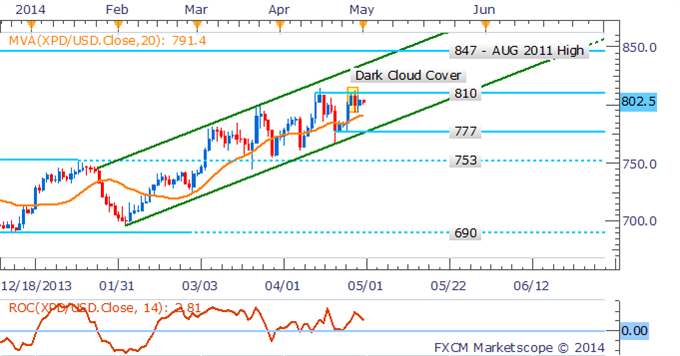 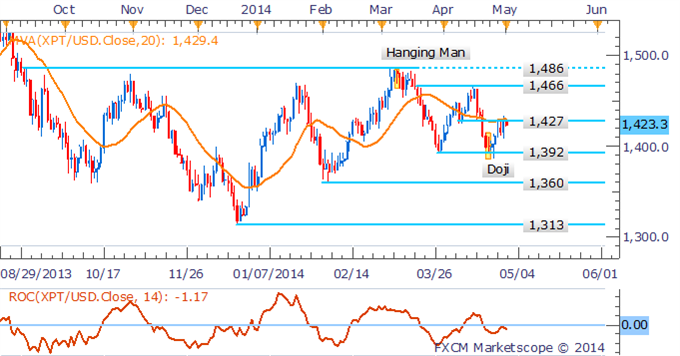