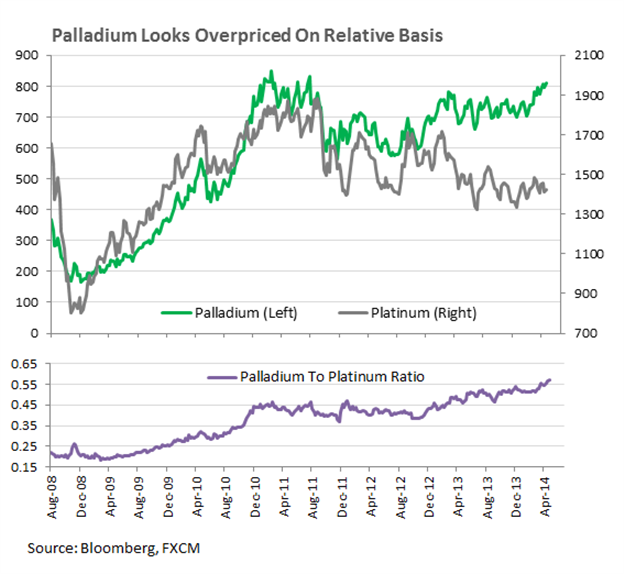 Gold and silver continue to pull back from key resistance in Asian trading today following falls during the European and US sessions overnight. Ebbing geopolitical risks as well an upside surprise to upcoming US data may spell further weakness for the precious metals in the session ahead. Meanwhile, copper prices are at risk of a more meaningful correction as fears over tightening credit conditions in China resurface.

The latest developments in the Ukrainian crisis have failed to bolster safe-haven demand for the precious metals with gold continuing its retreat below $1,300. While the turmoil in Eastern Europe simmers, in the absence of a more material escalation, fear-driven flows into the precious metals may continue to unwind, which could put further pressure on gold and silver.

Palladium prices may be particularly vulnerable to a correction on easing tensions in the region. Russia accounts for roughly 42% of palladium production and as the west refrains from enacting sanctions on its commodity exports, fears over potential supply disruptions may be unfounded, which suggests the potential for pullback in the metal. Prices may also be overvalued on a relative basis as suggested by the ratio of palladium to platinum climbing to the highest reading since 2002.

Heavy US Docket To Spark Volatility For Gold and Silver

Upside surprises to US house price data and consumer confidence figures due in the session ahead may offer some support to the greenback, which in turn could put further pressure on gold and silver. However, follow-through be somewhat limited, given traders may be hesitant to adopt new positions ahead of Wednesday’s US GDP figures, as well as the conclusion of the April FOMC rate decision.

With the Fed widely-expected to announce another reduction of $10bn a month to their asset purchase program, traders will likely look to the policy statement for cues. While fresh insights into the potential timing of rate hikes from the central bank are unlikely, an upbeat tone on the progress of the US economy may offer a lifeline to the US Dollar.

Copper and base metals prices are weakening further in Asian trading today following reports from newswires suggesting that Chinese regulators are close to enacting tighter conditions for commodities financing. While at this stage it appears the new measures may be focused on iron ore, fears over higher deposit margins for other base metals may spillover into weakness for copper prices. During March the commodity plunged by more than 9% over the course of 5 days on concerns over worsening credit conditions and a slowdown in Chinese economic growth.

Crude oil has broken below trendline support following the emergence of an Evening Star formation on the daily. Alongside building downside momentum (reflected by the rate of change indicator) and a move below the 20 SMA a bearish technical bias is offered. A close below the psychologically significant $100.00 handle would be seen as an opportunity to enter new short positions. However, we’re also mindful that volatility, reflected by the ATR continues to decline, which generally doesn’t favor breakout trading. 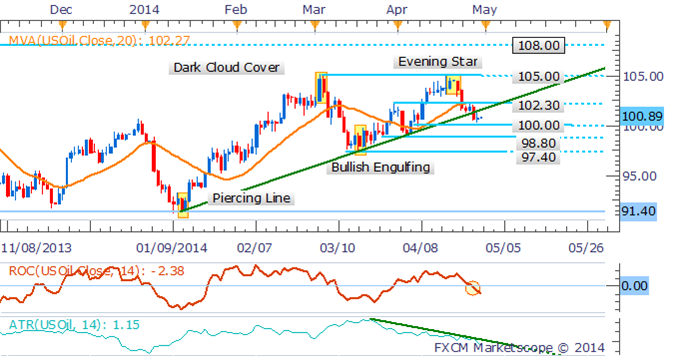 Gold is presenting some mixed technical signals on the daily chart. A Morning Star pattern near key support at $1,277 has received confirmation, which suggests the possible emergence of an uptrend. However, key resistance near $1,305 has held which coincides with the third touch and respect of a descending trend line. A daily close above $1,305 would open the door to the next level of resistance at 50% Fib Retracement level near $1,332.75, while declines would likely be met by buying support at $1,277. 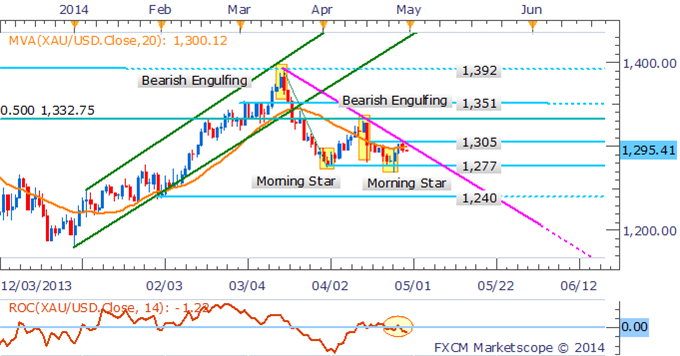 The 23.6% Fib Retracement level near $19.60/70 continues to cap gains for silver. While new shorts near the key resistance level look tempting, a lack of downside momentum signaled by the rate of change indicator does little to reinforce a bearish bias. 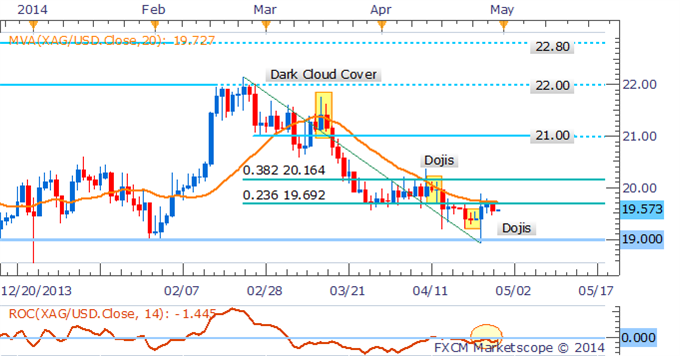 Copper has pulled back from the top its ascending trend channel to key support at the $3.085 mark. Current levels may offer an opportunity for new longs, given the commodity remains in an uptrend on the daily with prices remaining above the 20 SMA, and positive momentum signaled by the rate of change indicator. 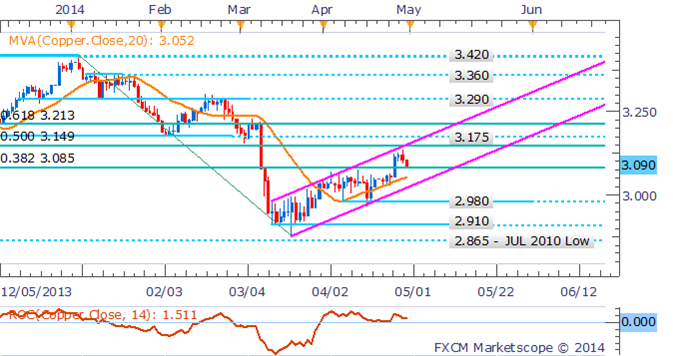 Palladium remains in an upward trend channel following the original breakout above the range-top at $753. However, following a failure to close above critical resistance at $810 and the emergence of a Dark Cloud Cover pattern, a dip looks likely. Buyers are likely to emerge near the lower trend channel line and $777 level. 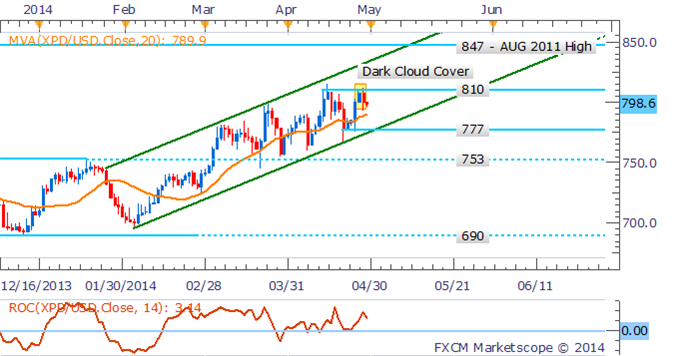 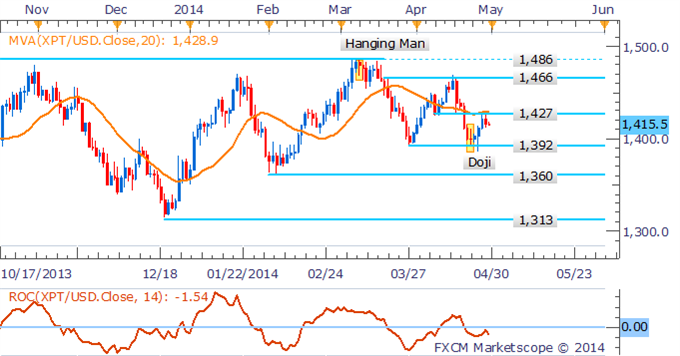