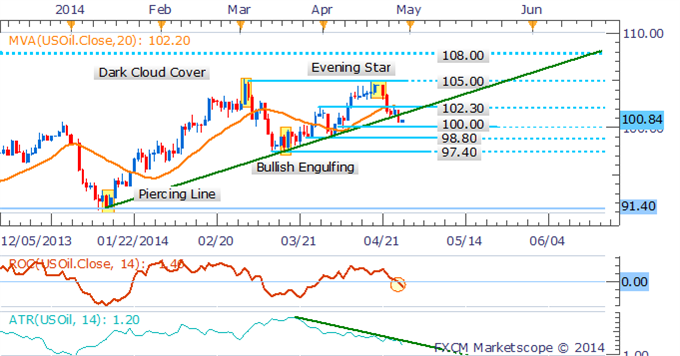 Palladium Eyes 2014 Highs, US Data To Spark Volatility For Commodities

The precious metals are edging higher in Asian trading as tensions in Eastern Europe continue to simmer. Meanwhile, crude oil is recovering some of the ground it lost on Friday as traders cautiously return to risk-sensitive assets. A light economic calendar over the next 24 hours is likely to leave guidance for the commodities space in the hands of risk-appetite, while a busy docket over the remainder week is likely to spell a resurgence in volatility for the commodities space.

Geopolitical risks remains on traders’ radars as fears of a potential escalation in the ongoing Ukrainian turmoil have spurred renewed safe-haven demand for the precious metals. While gold and silver have staged a strong recovery in recent trading, palladium is of particular note as it threatens at a breakout to a fresh multi-year high. Prices have likely received additional support due to concerns over potential supply disruptions from Russia, the world’s largest producer of the metal.

While there appears to be little hope for a resolution to the ongoing crisis, an underwhelming response from the West with an absence of sanctions on Russian commodity exports, may leave limited potential for further fear-fulled gains in the precious metals.

US Dollar Resurgence Could Spell Weakness For Gold and Silver

Traders are likely to look past the upcoming US Pending Home Sales figures due in the session ahead, as their gaze turns to the top-tier economic data due later in the week. Upside surprises to the US Q1 GDP figures and critical US payrollsdata would likely put the wind in the sails of the US Dollar, which in turn would bode ill for gold and silver prices. More on the weekly outlook for gold can be found here.

However, in the lead-up to the key pieces of event risk, the commodities are likely to turn to general risk-trends for cues. Investor sentiment has proven vulnerable as we trade near record highs for US equities and traders question the potential for futher gains. If investors are tempted into profit-taking the potential for a spillover into broader-based risk aversion could spell weakness for the growth-sensitive commodities like crude oil.

Crude oil has broken below trendline support and the noteworthy 102.30 mark in recent trading. Alongside building downside momentum (reflected by the rate of change indicator) and a move below the 20 SMA a bearish technical bias is offered. A recovery back to the trendline breakout point, or close below the psychologically significant $100.00 handle would be seen as an opportunity to enter new short positions.

Gold is presenting some mixed technical signals on the daily chart. A Morning Star pattern near key support at $1,277 has received confirmation which coupled with a shift in prices above the 20 SMA suggests the possible emergence of an uptrend. However, we’re also testing a key resistance level near $1,305 which also represents the third touch for a descending trendline. This leaves gold at a critical juncture over the next 24 hours. A daily close above $1,305 would open the door to the next level of resistance at 50% Fib Retracement level near $1,332.75, while declines would likely be met by support at $1,277. 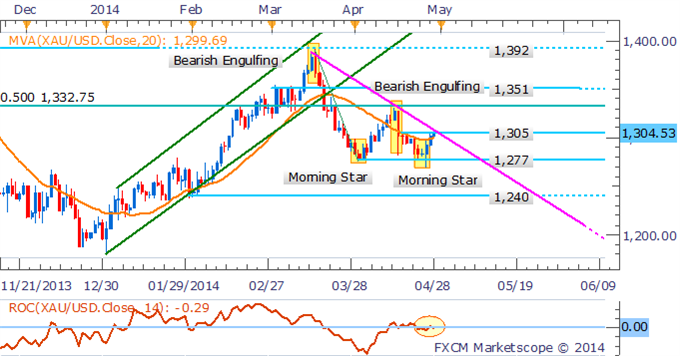 The silver bulls have returned following a test of the critical $19.00 handle in recent trading. However, the $19.60/70 mark is likely to prompt some hesitation and may restrain further gains for the precious metal. While new shorts near the key resistance level look tempting, a lack of downside momentum signaled by the rate of change indicator does little to reinforce a bearish bias. 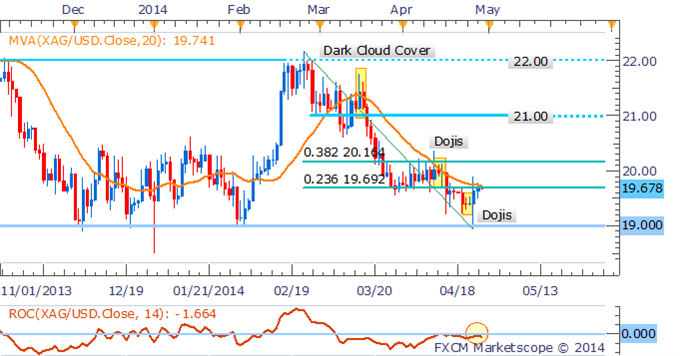 Copper has staged a breakout above of its trading range between $2.98 and $3.08 with prices eyeing the $3.15 mark (50% Fib Retracement Level). Given notable trendline resistance looming overhead, a pullback to the breakout point near $3.085 would be preferred for entering new long positions.

Copper: Pull Back To Breakout Point To Offer Buying Opportunities 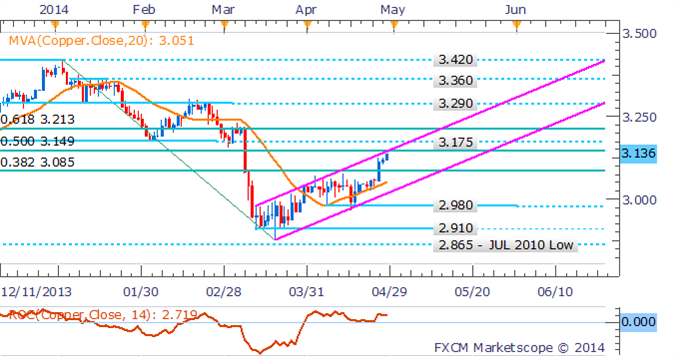 Palladium remains in an upward trend channel following the original breakout above the range-top at $753. With bullish technical signals remaining, a daily close above critical resistance at $810 would create an opportunity for new long positions with a target offered by the August 2011 high near $850. 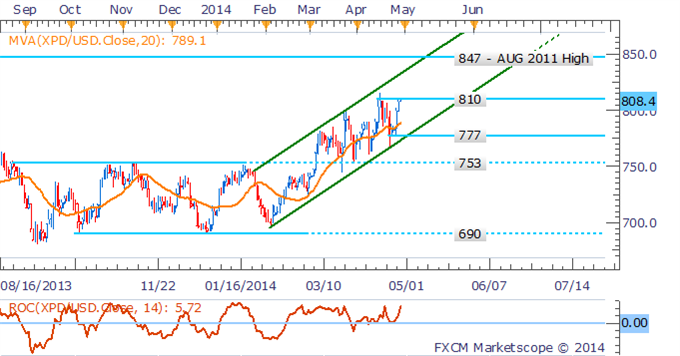 The multi-month consolidation between $1,313 and $1,486 for Platinum has continued, with prices once again hinting at a swing to the top of the recent range. Clearance of resistance at $1,427 could open an advance to the April high near $1,466. 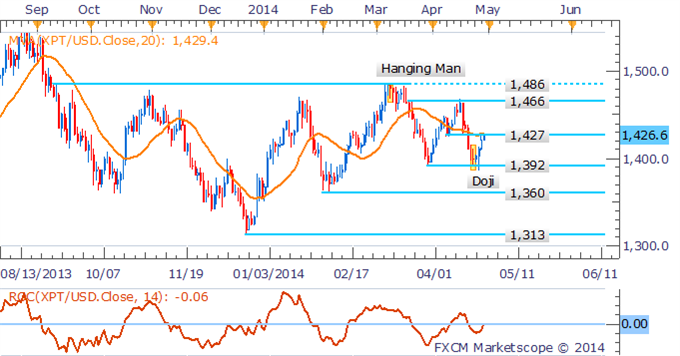