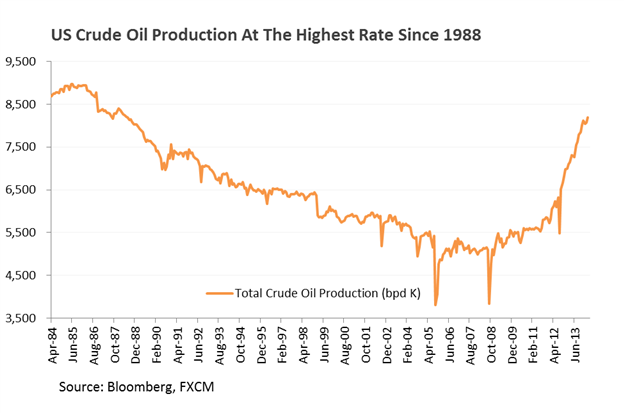 Gold and silver are wavering around key technical levels in Asian trading as investors re-assess the prospect of heightened geopolitical renewing safe-haven demand for the precious metals. Similarly, WTI continues to struggle around the $104.00 handle following a bearish inventories report from the Department of Energy overnight. With a trading holiday on Friday, the commodities space will likely be looking to US Durables Goods Orders and China Manufacturing figures in the week ahead for further cues.

Gold is teetering on the brink of a further correction as the yellow metal wavers around the $1,300 handle in Asian trading. While the ongoing turmoil in Eastern Europe remains on the radar, the latest reports of clashes between Pro-Russian separatists and Ukrainian forces have failed to lift the precious metals. In the absence of a further escalation in the region over the coming week, safe-haven demand for gold may continue to ebb which could send the commodity on its next leg lower.

The energies space has also taken some cues from the Ukrainian crisis this week, with the most notable effects being seen in the price of Brent oil. The benchmark for crude prices is on track for its biggest weekly percentage gain since February, likely bolstered by concerns over supply disruptions from Russia, who supplies roughly one third of Europe’s oil. However, at this stage the West has refrained from imposing energy export sanctions on Russia, which suggests speculation over a crimp to supply may be unjustified at this stage. This puts crude oil in a precarious position over the next week, with the potential for a de-escalation to cause a quick correction for the commodity.

West Texas Intermediate crude erased earlier gains in US trading, following a report from the Department of Energy that revealed a jump in inventories of just over 10 million barrels for the week. The Weekly Petroleum Status report also noted that crude oil production in the US has risen to the highest level since 1988.

As noted in yesterday’s commodities update, US oil inventories in the Gulf Coast region continue to build, as supplies are shifted to refineries from the WTI delivery point at Cushing, OK. A sustained gain in inventory levels alongside rising production suggests crude prices may be vulnerable at current levels.

While the weekly US Initial Jobless Claims report could hold some sway in the session ahead, traders may be hesitant to adopt new positions heading into the Easter long weekend, given that trading will be closed for most commodities on Good Friday. We’re likely to see a more noteworthy reaction to the release of US Durable Goods Orders and China manufacturing figures next week.

Chinese Q1 GDP figures released on Wednesday revealed the slowest pace of growth since 2009, which has done little to alleviate concerns over a further deceleration in economic growth in the Asian giant. This sets the stage for a disappointing PMI print next week to weigh on copper and crude oil prices, based on concerns over future demand for the commodities. However, this could be counterbalanced by a better-than-anticipated US Durable Goods Orders reading, which would act as a bullish signal for crude demand in the world’s largest oil consumer. 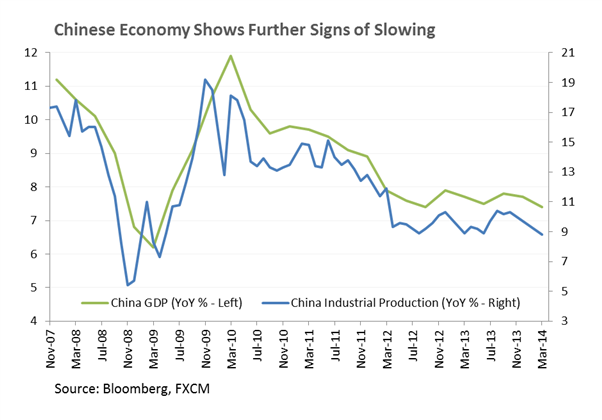 Risk-trends continue to offer an undercurrent to the commodities space leaving the growth-sensitive commodities like crude oil and copper vulnerable to a shift in sentiment. Several economic data prints from the world’s largest economy offered upside surprises this week, which helped to buoy risk-appetite and likely supported WTI. However, sentiment has been shown to change on a dime, as evidenced by the reaction to the slightly weaker-than-anticipated NFP print earlier in the month. As we cautiously edge back towards the yearly highs for US equities, traders should be mindful of the potential for souring of sentiment, which could send crude oil and copper reeling.

Crude oil is struggling below the 105.00 handle following a break above the triangle formation on the daily. The hesitation amongst the bulls is made evident by the emergence of several Doji formations. While the breakout and continued uptrend favors a bullish technical bias, there is the potential for a pullback to support at 102.30, which would be seen as an opportunity to enter new long positions at this stage.

Crude Oil: Dojis Warn of a Pullback to Support 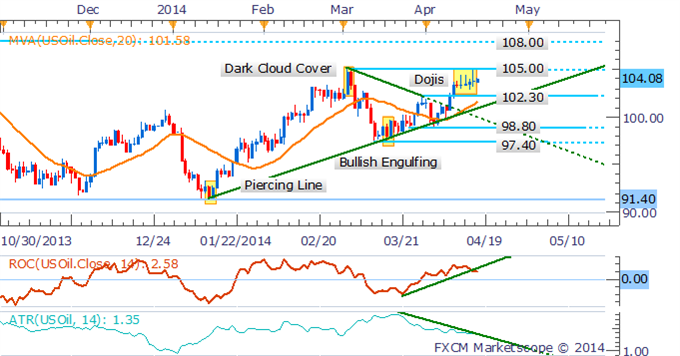 Gold has gone up by the stairs and down by the elevator this month. The plunge in prices during recent trading has acted to negate several bullish technical signals for the commodity. A Bearish Engulfing pattern near the 50% Fib Retracement level at $1,322.75 may be signaling further declines ahead. Buyers may look to emerge at support near $1,277, while $1,300 has offered resistance in intraday trade. 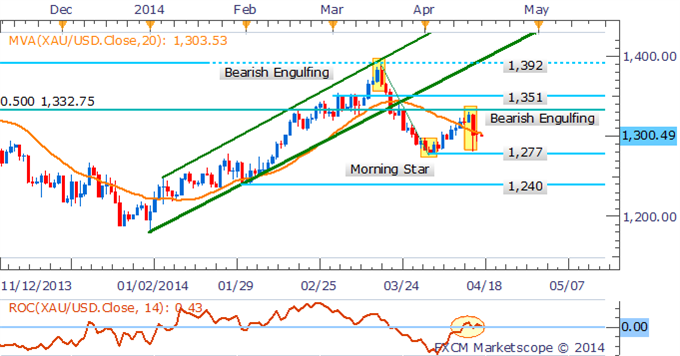 Silver has finally broken below its prior range-bottom at $19.60, making a test of key support $19.00 look likely. This comes alongside several bearish signals, including prices holding below the 20 SMA (indicating a downtrend), as well as sustained negative momentum (evidenced by the ROC). 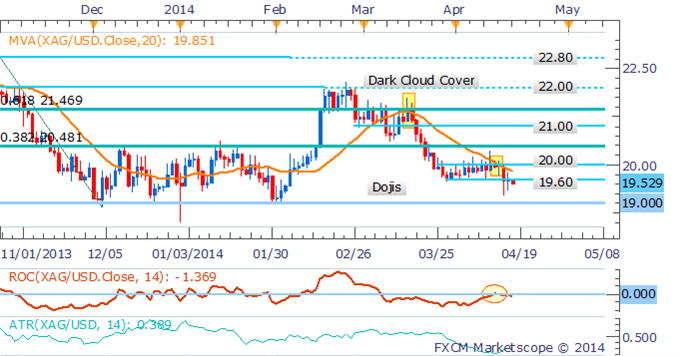 Copper prices have managed to recover above the $3.00 handle and cross back above the 20 SMA in recent trading, which obfuscates a technical bias for the base metal. With the rate of change indicator signaling fading upside momentum, we may be in store for a more range-bound environment for copper. Resistance continues to loom nearby at $3.085 while buyers appear to be prepared to support prices at $2.980.

Copper: Range Looks To Be Emerging 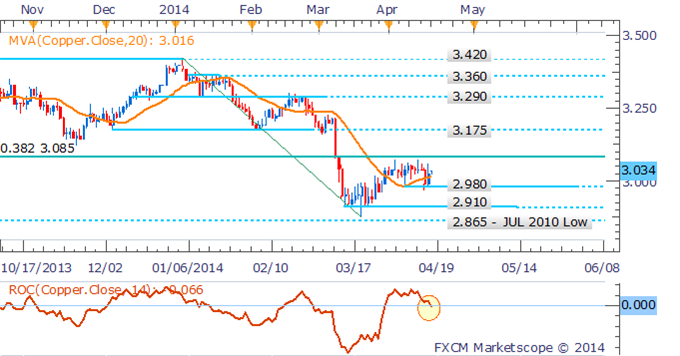