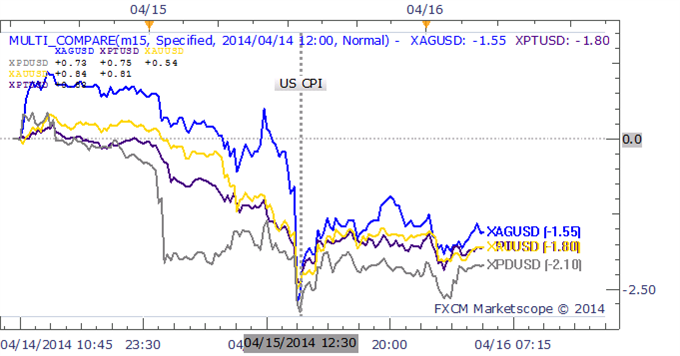 Gold and silver are edging lower in Asian trading today following a plunge in prices overnight on the back of a stronger US Dollar and ebbing concerns over Ukrainian turmoil. A continued recovery in the greenback could arise on an upside surprise to US industrial production and housing figures due in the session ahead, which may spell further weakness for the precious metals. Meanwhile, crude oil inventories figures will be on the radar for WTI traders as the commodity struggles below the $105.00 handle.

Gold Collapses Below $1,300 In Intraday Trade

A look back at precious metals prices over the past 24 hours reveals a steady drift lower during the European session, with a collapse occurring in early US trading. The proximity of the plunge in prices to the release of the US CPI reading suggests traders sold down the metals in fear of a possible upside surprise and the potential for a rally in the US Dollar.

As warned of in yesterday’s commodities report, the precious metals remain vulnerable to abating geopolitical risks. Traders need only cast their mind’s back to gold’s last drop of a similar magnitude in late March, which came as the market discounted the potential for a further escalation in the ongoing Ukrainian crisis. While tensions between Russia and Ukraine flared earlier in the week, traders are once again looking past the latest developments. In the absence of a material escalation in Eastern Europe gold may struggle to find the spark needed to fuel a recovery, which could see it continue its push below the $1,300 handle.

A set of upside surprises to US economic data this week has helped bolster demand for the greenback, and has likely weighed on the precious metals. With US industrial production data and housing figures on tap in the session ahead, some better-than-anticipated prints, could fuel further strength in the reserve currency and spell continued weakness for gold and silver.

Yellen Q&A On The Radar

Also on the radar will be an upcoming speech from Fed Chair Janet Yellen. While the central banker failed to deliver market-moving comments in a broadcast video conference overnight, a scheduled Q&A after her speech tonight may elicit some headline worthy responses. Traders will be particularly alert to remarks on the potential of interest rates, given Dr. Yellen’s prior suggestion that the Fed may look to raise rates within 6 months of ending its quantitative easing program, which sparked a sell-off in gold and silver.

WTI’s recent consolidation near the $104.00 handle may be set to break on the back of the upcoming Petroleum Status Report from the DOE. Trends in recent inventories figures reveal a shift in stockpiles to the Gulf Coast from the delivery hub for WTI at Cushing, OK, which has likely contributed to strength in crude prices. However, as stocks in district 3 (which includes Texas) push record highs, a glut in inventories in the region looks evident, which may prompt a slower drawdown from Cushing going forward, and lead to weakness in WTI. 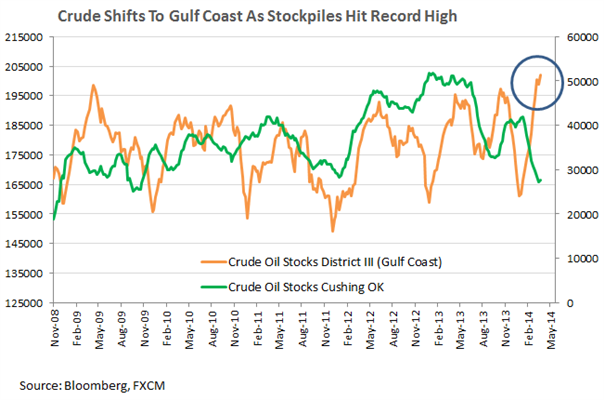 Crude oil is struggling below the 105.00 handle following a break above the triangle formation on the daily. The hesitation amongst the bulls is made evident by the emergence of several Doji formations. While the breakout and continued uptrend favors a bullish technical bias, there is the potential for a pullback to support at 102.30, which would be seen as an opportunity to enter new long positions at this stage.

Crude Oil: Struggles To Hit 105.00 As Dojis Warn of a Pullback 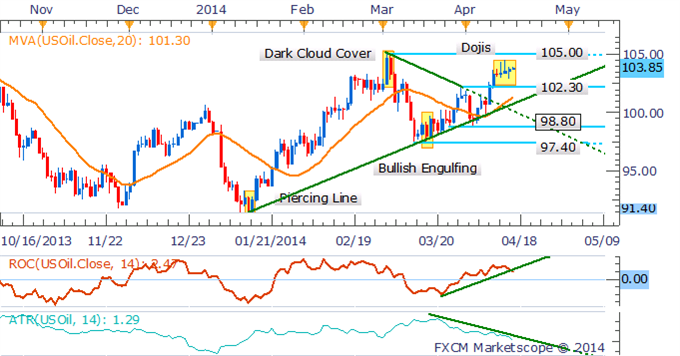 Gold has gone up the stairs and down by the elevator this month. The plunge in prices during recent trading has acted to negate several bullish technical signals for the commodity. A Bearish Engulfing pattern near the 50% Fib Retracement level at $1,322.75 may be signaling further declines ahead. Buyers may look to emerge at support near $1,277, while $1,300 has offered resistance in intraday trade. 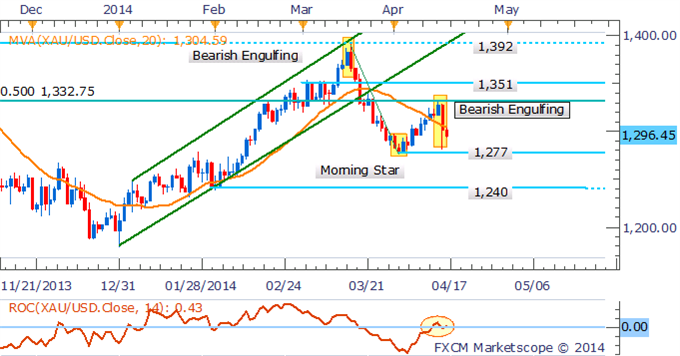 Silver has finally broken below its recent range making a test of key support $19.00 look likely. This comes alongside several bearish signals, including prices holding below the 20 SMA (indicating a downtrend), as well as sustained negative momentum (evidenced by the ROC). 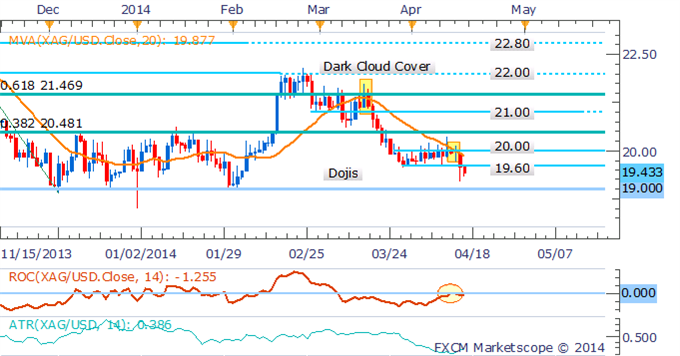 As warned of in recent commodities updates, copper’s uptrend was showing signs of capitulation, which suggested a potential correction for the base metal. With prices dropping below key support at $3.00 alongside a shift in prices below the 20 SMA a bearish technical bias is offered. 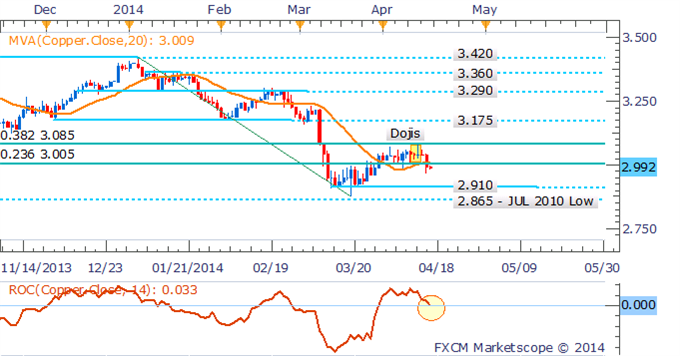