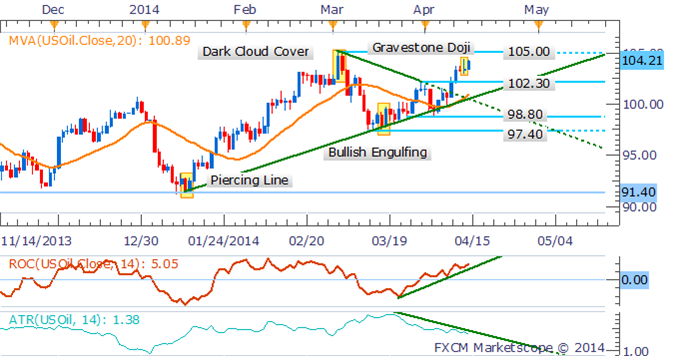 Crude oil and natural gas jumped at the outset of Asian trading today likely on the back of a flare-up in Ukrainian tensions over the weekend. The potential for an escalation in Eastern Europe has also likely bolstered safe-haven demand for the precious metals with gold prices pushing above $1,320. During the session head; elevated geopolitical tensions could help the commodities gain further, while upcoming US data could provide additional cues.

After stewing in the background for the past several weeks, the turmoil between Russia and Ukraine has made its way back onto the front page. This comes following reports from newswires of a confrontation over the weekend between pro-Russian supporters and Ukrainian serviceman that resulted in at least one casualty.

The latest developments in the ongoing crisis have likely sparked fears over potential supply disruptions for crude oil and natural gas, which has caused prices to spike in early Asian trading. Concerns are founded on the fact that Russia, the world’s largest energy producer, supplies roughly one third of Europe’s natural gas and oil. The possibility of an escalation in the region could prompt further sanctions from the West, which could potentially restrict exports of the commodities from Russia.

Gold and Silver also surged at the outset of trading, likely in reaction to news of the latest developments in Eastern Europe. Mounting concerns over conflict in the region back in February helped gold crack the $1,350 handle. However, prices quickly retreated as tensions eased, thus traders should be mindful of the potential for another repeat in the latest episode of the Ukrainian turmoil.

US Data To Offer Further Cues For Crude

Crude prices have remained remarkably resilient in the face of the souring of investor sentiment indicated by the rout in US equities. While some of the support today is likely be attributable to the Ukrainian crisis, the commodity was also boosted by a better-than-anticipated University of Michigan Consumer Confidence reading on Friday. Thus another upside surprise to US economic data from the Advance Retail Sales figures in the session ahead could fuel further gains for WTI. However, the door is open to a downside surprise given that economists are tipping a 0.9% increase for the month, which would make it the highest reading since September 2012.

Crude oil prices have broken above the triangle formation on the daily, which helps offer a bullish technical bias for the commodity. With the uptrend still intact and building upside momentum signaled by the Rate of Change indicator the 105.00 target looks attainable. However, the ATR continues to reflect low levels of volatility for the commodity, which generally does not favor trading breakouts. Also a couple of Doji candlesticks near 103.00 suggest some hesitation amongst the bulls.

Gold has shifted to a short-term uptrend on the daily as signaled by prices edging above the 20 SMA and a move into positive territory on the Rate of Change indicator. The bounce in the gold price was foreshadowed by the Morning Star formation that arose near key support at $1,277. In light of the bullish technical signals for the commodity; the move above the $1,320 handle favors longs with a target offered by the next noteworthy resistance at $1,351. However, it is likely there will be some interim selling pressure at the 50% Fib Retracement level ($1,332.75). 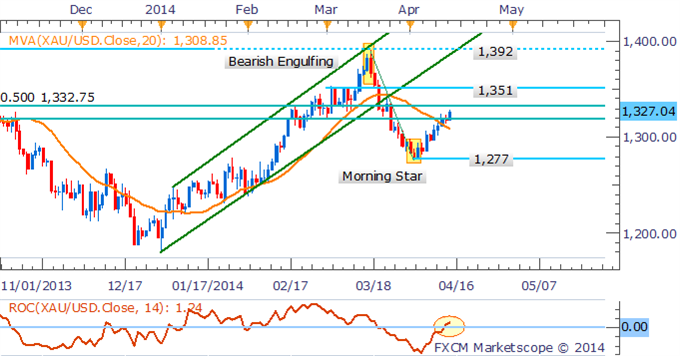 Silver continues to keep traders in suspense with prices hugging the $20.00 handle. The recent consolidation suggests the short-term downtrend may be set to shift, which is reinforced by the Rate of Change indicator revealing waning downside momentum. The potential for an upside break above $20.00 makes new short positions look less attractive. 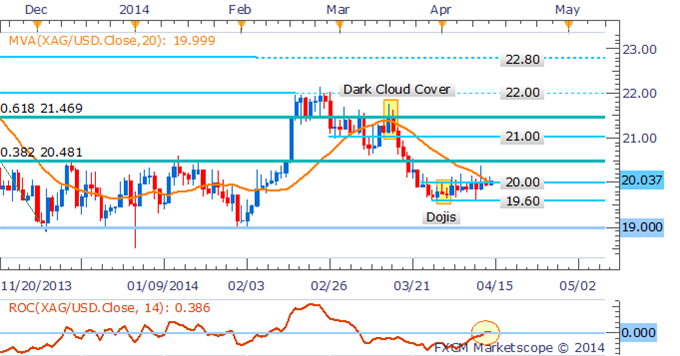 The uptrend for copper is already showing signs of capitulation as the commodity struggles to push above the 38.2% Fib Level at $3.085. Several Doji formations on the daily demonstrate indecision amongst traders, yet they are not enough to suggest a correction at this stage. Additionally, with the rate of change indicator signaling fading upside momentum, we’re left with a neutral technical bias. 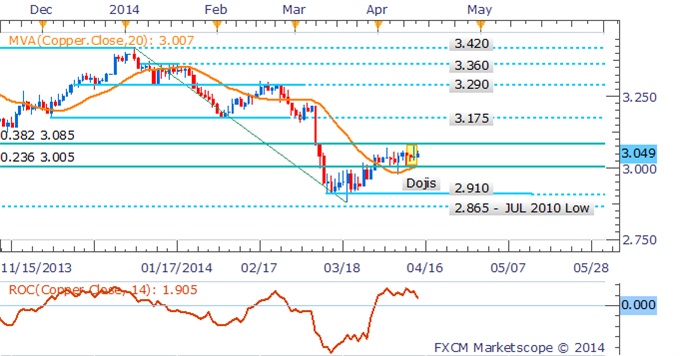