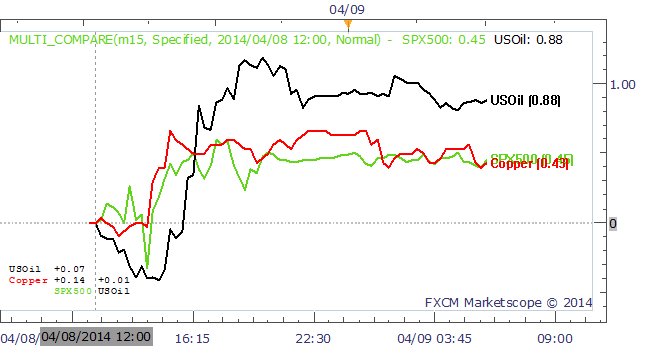 Crude Oil, Copper In Store For Volatility On Inventories and China Data

Crude oil has vaulted above the $102.00 handle in recent trading which follows on from warnings of an imminent breakout based on a technical analysis pattern. Meanwhile,gold is extending its recent gains above the $1,300 level as the US Dollar continues to flounder. Further volatility is likely in store for the commodities space over the next 24 hours with the March FOMC Meeting Minutes, DOE Inventories Reportand China trade balance figures set to cross the wires.

Crude oil and copperwere propelled higher alongside gains in the S&P 500in recent trading as risk-appetite returned to the market. Two steep days of declines for US equity benchmarks likely prompted the bears to ease back, paving the way for a relief-rally. The firming of investor sentiment likely aided an advance in the growth-sensitive commodities which includes the base metals and the WTI contract.

To help illustrate the relationship between crude oil, copper, and the S&P 500, the multi-compare indicator is used to show the percentage changes for each of the instruments from the outset of US trading on Tuesday.

With risk-trends still helping to offer the commodities their bearings, traders should be mindful of the potential for the bulls to return as fears of a collapse in equity indices fail to materialise. This could help crude oil and copper continue to strengthen.

Looking ahead, the DOE’s weekly Petroleum Status Report will be on the radar for crude oil traders. Inventories at Cushing Oklahoma, the delivery point for the WTI contract, have declined for 9 consecutive weeks.Another negative reading would reflect a scenario where demand continues to outstrip supply, which could help support prices. Newswires have attributed the falling inventory levels to supplies being shifted to the Gulf Coast thanks to the opening of the southern leg of the Keystone XL pipeline. 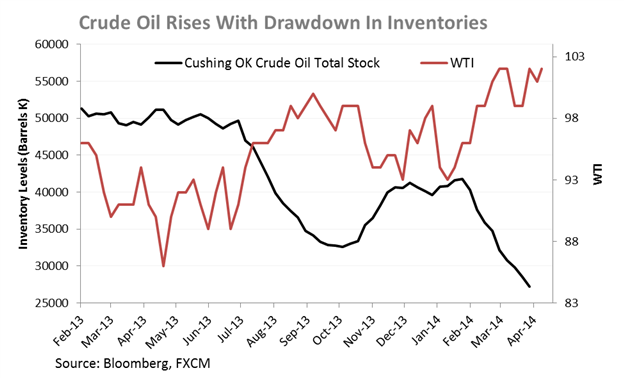 Meanwhile, copper traders will likely look to the East, with China’s March trade balance figures due during Asian trading. The base metal plunged following last month’s distressing decline in exports which reflected the largest percentage fall since 2011. Tomorrow’s reading may help shed some light on whether the dismal print was a one-off, which may have been attributed to a holiday period in China, or whether a more material slowdown is underway in the world’s second largest economy. In either scenario copper is likely in store for a volatile session with traders eyeing the psychologically-significant $3.00 handle as a key level of support.

Finally, the March Fed Meeting Minutes are noteworthy for the precious metals space, given the potential for another hawkish lean from the central bank to short-circuit some of the US Dollar weakness we have witnessed in recent trading. The minutes are of particular interest following Fed Chair Janet Yellen’s suggestion that a rate hike may be on the cards as soon as six months after the end of Quantitative Easing. The greenback needs a strong fundamental catalyst to turn the tide in its favour after last week’s disappointing US jobs report, which left the currency on the ropes. In the absence of a turnaround in the reserve-currency, gold and silver may continue to strengthen.

Crude oil prices have broken above the triangle formation on the daily, which helps offer a bullish technical bias for the commodity. A push above resistance at the 102.30 mark may help WTI extend its recent gains towards its 2014 high near 105.00. However, the ATR continues to reflect low levels of volatility for crude oil, which generally does not favor trading breakout opportunities. 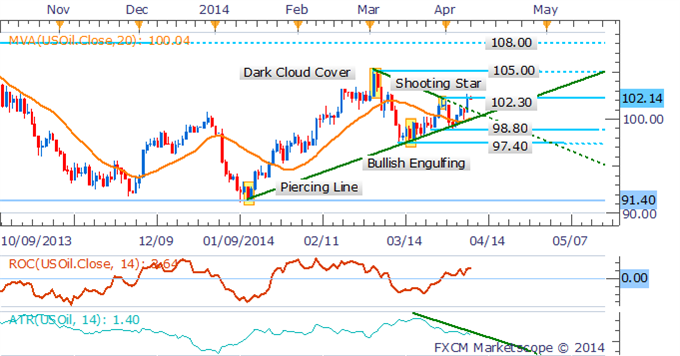 A Morning Star candlestick pattern on the daily suggests a shift in the short-term trend for gold may be on the cards. This is made more noteworthy by prices hinting at a push above the 20 SMA as well as fading negative momentum denoted by the Rate of Change indicator. The daily close above the 23.6% Fib at $1,302.57 has negated a bearish bias and opens up an advance to $1,320. Silver remains in a short-term downtrend as signaled by prices holding below their 20 SMA. However, the rate of change indicator is beginning to reflect waning downside momentum. Given that notable selling pressure remains at the $20.00 level, shorts are preferred with a target offered by the $19.00 mark. 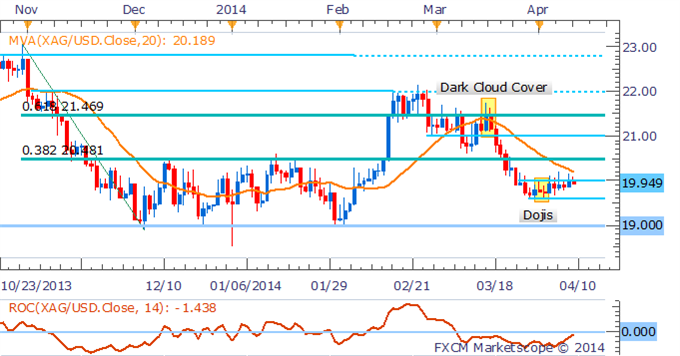 The short-term trend for copper has shifted to the upside as signaled by the 20 SMA and Rate of Change indicator. However, a Gravestone Doji suggests some hesitation amongst the bulls following a run at the $3.085 mark in recent trading. A correction back towards key support at $3.00 would be seen as an opportunity to enter new long positions. 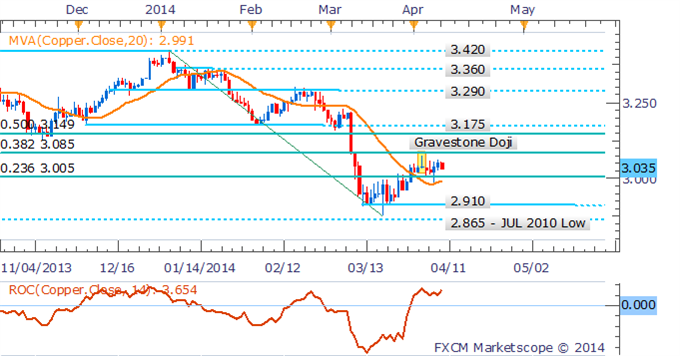