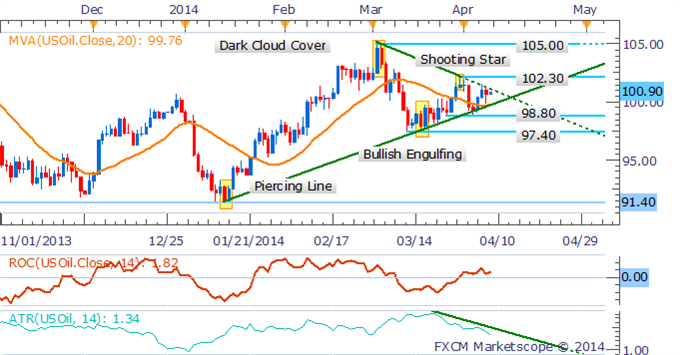 Gold is knocking on the $1,310 mark in late Asian trading alongside a dip in the US Dollar as risk-appetite firms. Similarly, crude oil is threatening a breakout from its recent consolidation following a bounce off the psychologically-significant $100 a barrel handle in recent trading. A light schedule for economic data in the session ahead leaves the commodities to take cues from broader risk trends and “Fed-speak”.

As noted in yesterday’s commodities report; the retreat by US equity indices on the back of what was only a moderate miss from Friday’s US jobs report highlights the current vulnerability of investor risk-appetite. This bears significance for the path of the growth-sensitive commodities like copper and crude oil, which dipped in early US trading overnight alongside declines in the S&P500, before recovering ground later in the session.

A light economic docket likely left traders to question whether the near-record levels for US equity benchmarks could be sustained in the absence of supportive economic newsflow, which in turn opened the door to profit-taking. Despite the session ahead having relatively few pieces of US data on the calendar, the bears may look to take a breather given the magnitude of the pullback thus far. This could leave the WTI contract and the base-metals like copper to be relatively well-supported.

Meanwhile, gold’s fate likely hinges on the path of the US Dollar as the yellow metal teases at an extended advance above $1,300 alongside a dip in the greenback. The reserve currency has floundered over the past month as soft economic data has likely tempered bets for a more hawkish Federal Reserve. The importance of Fed policy expectations puts our focus on upcoming speeches by FOMC members Evans, Plosser and Kocherlakato. If the policy officials suggest a need for the Fed to remain highly accommodative after the central bank ends its record stimulus program, it could create further weakness for the greenback, and bolster gold and silver prices.

Crude oil’s consolidation has continued alongside a decline in volatility and fading upside momentum (signaled by the Rate of Change indicator). A breakout from the triangle formation that has appeared on the daily looks imminent, which would help offer a technical bias for the commodity.

A Morning Star candlestick pattern on the daily suggests a shift in the short-term trend for gold may be on the cards. However, at this stage the downtrend remains intact, as signaled by the 20 SMA and Rate of Change indicator. This leaves a bearish technical bias preferred with the bounce to the psychologically-significant $1,300 handle seen as an opportunity to enter new short positions with a target offered by the recent lows at $1,277. However, a daily close above the 23.6% Fib at $1,302.57 would negate a bearish bias and likely open up an advance to $1,320. 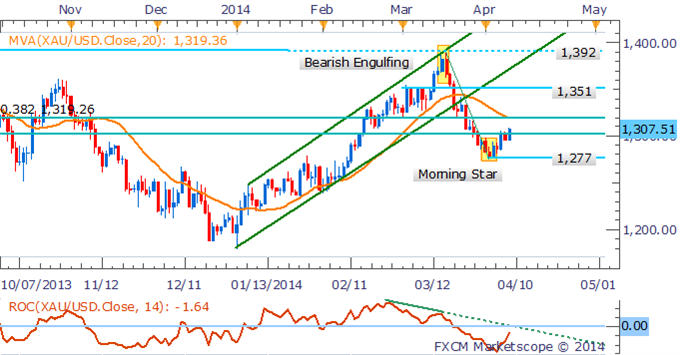 Silver remains in a short-term downtrend as signaled by prices holding below their 20 SMA. However, the rate of change indicator is beginning to reflect waning downside momentum. Given that notable selling pressure remaining at the $20.00 level, shorts are preferred with a target offered by the $19.00 mark. 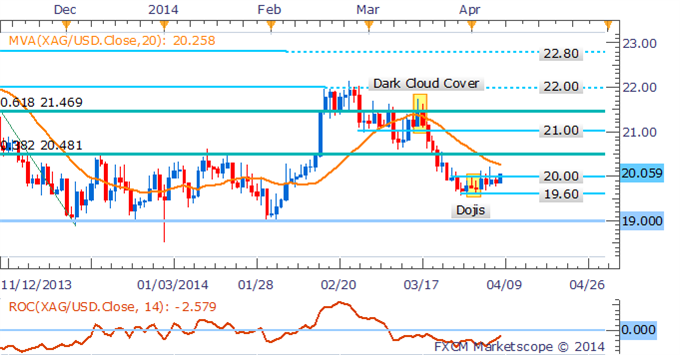 The short-term trend for copper has shifted to the upside as signaled by the 20 SMA and Rate of Change indicator. However, a Gravestone Doji suggests some hesitation amongst the bulls following a run at the $3.085 mark in recent trading. The correction back towards key support at $3.00 is seen as an opportunity to enter new long positions. 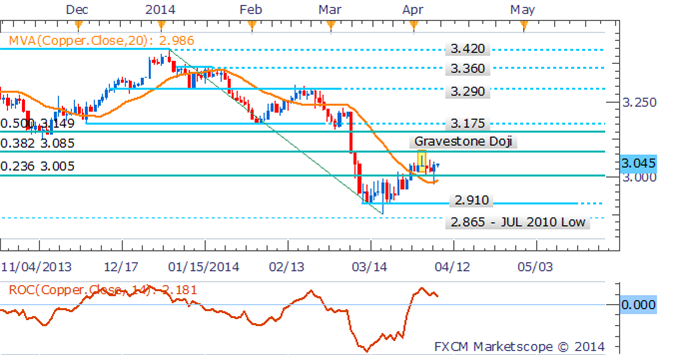