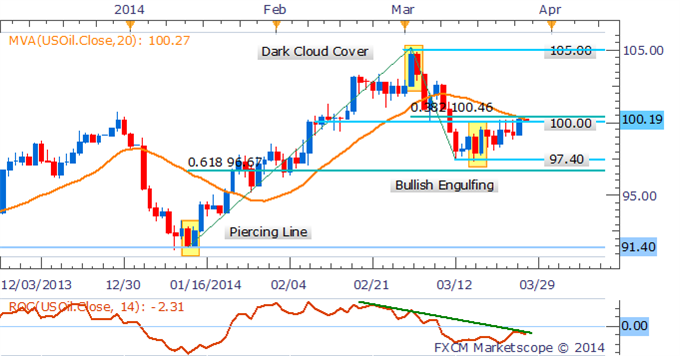 Crude oil has broken above the psychologically-significant $100 handle following some positive US economic data overnight, leaving the door open to further gains on an upside surprise to upcoming US revised GDP figures. Meanwhile, goldmay be vulnerable to further declines following a brief dip below the $1,300 mark overnight as ebbing geopolitical risks sap safe-haven demand for the precious metals.

Crude oil came out of the gates to a strong start in US trading overnight and continued to edge higher following a better-than-anticipated US Durable Goods Orders reading. Despite a soft inventories report from the DOE and a dip in US equities, the bulls managed to hold onto control of price direction to push the WTI contract above the $100 per barrel mark.

Positive US economic data generally bodes well for the WTI contract given the commodity’s growth-sensitive standing. Thus there is the potential for continued gains for crude oil if upcoming US revised GDP figures and initial jobless claimsdata offer upside surprises.

Following a brief respite in Asian trading yesterday the precious metals resumed their declines during the US session. Curiously, the falls occurred alongside a weaker greenback which suggests that ebbing safe-haven demand for the commodities was the likely driver, rather than broad US dollar strength. Gold and silver have suffered as easinggeopolitical tensions in Eastern Europe cause traders to unwind fear-driven positions in the precious metals. A further abating of concerns in the region would likely continue to weigh on the gold price and prompt another dip below the $1,300 handle.

CRUDE OIL TECHNICAL ANALYSIS – The daily close above the psychologically-significant $100 handle creates doubt over the possibility of renewed selling pressure for crude oil. However, with the 20 SMA and ROC both indicating that prices remain in a short-term downtrend the potential for further gains may be limited. The nearby 38.2% Fib Retracement level at 100.46 offers the next level of notable resistance.

GOLD TECHNICAL ANALYSIS – Several bearish technical signals remain for Gold, which may be warning of further declines for the commodity. The short-term trend has shifted to the downside indicated by prices moving below their 20 SMA in addition to a negative Rate of Change reading and a break of the ascending trend channel. This follows on from a warning offered by the Bearish Engulfing candlestick pattern that formed near the key $1,392 resistance level. A break below support at $1,300 would open up $1,285 (50% Fib Retracement Level). 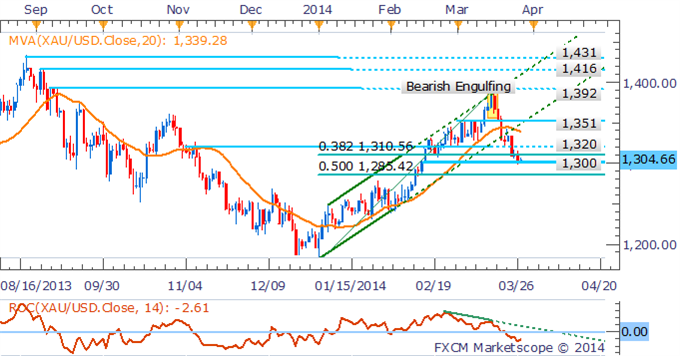 SILVER TECHNICAL ANALYSIS – Silver remains in a short-term downtrend as signaled by prices holding below their 20 SMA and the rate of change indicator reflecting building downside momentum. A retracement back towards resistance at $20.50 would be seen as a new opportunity to enter short positions with a target offered by support at $19.00. 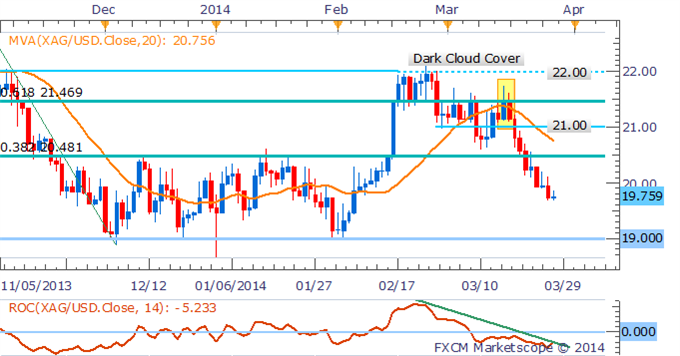 COPPER TECHNICAL ANALYSIS– The psychologically-significant $3.00 handle continues to offer noteworthy resistance for copper. A bearish technical bias is retained given the downtrend is still intact which is indicated by prices remaining below their 20 SMA. Fresh declines for the base metal may be met with buying support at the $2.910 mark. 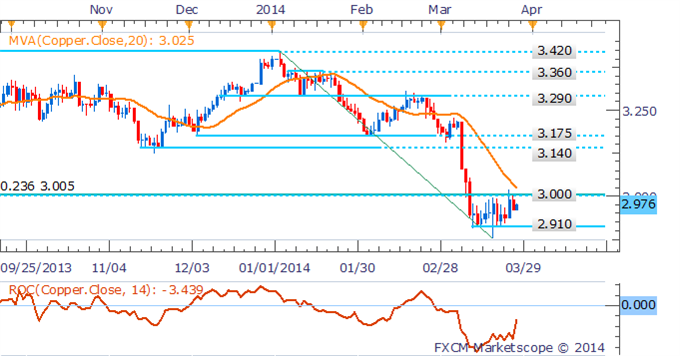