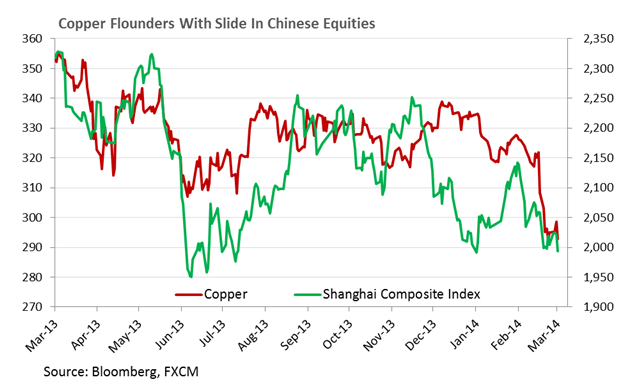 Copperhas dipped back towards critical support at $2.910 overnight with traders likely repositioning themselvesahead of upcoming China manufacturing data,which will likely spark further volatility for the commodity. Meanwhile, Gold is heading for its worst weekly percentage loss since September 2013 as a recovery in the US dollar and easing Ukrainian tensions weigh on the precious metals space.

Mounting concerns over a deceleration of economic growth and questionable credit quality in the world’s second largest economy likely contributed to Copper’s plunge to multi-year lows this month. The drop mirrors a decline in Chinese equities (see chart below) and follows on from a raft of recent disappointing data from the Asian giant. Another miss from upcoming preliminary Chinese manufacturing figures set to cross the wires on Monday could send copper on its next leg lower.

There appears to be some signs of stabilisation in the precious metals space in early Asian trading today. This follows on from a plunge in prices earlier in the week on the back of a decidedly hawkish tone from the US Federal Reserve at their March meeting. The hint at a timely rate hike after the end of quantitive easing contributed to a rise in US 10 year yields which helped bolster the USD and weighed on gold and silver.

Demand for the fiat-money alternatives has also likely weakened as geopolitical risks in Eastern Europe wane and traders return to yield-plays. While threats of further sanctions from the West on Russia remain, in the absence of an escalation towards armed conflict, safe-haven demand for gold may be sapped.

The yellow metal may also come under pressure in the week ahead if the nascent strength for the greenback can gain traction. The revival of the reserve currency could be fuelled if upcoming US economic data including revised GDP figuresbeat economists’ forecasts, which may in turn firm Fed policy expectations. 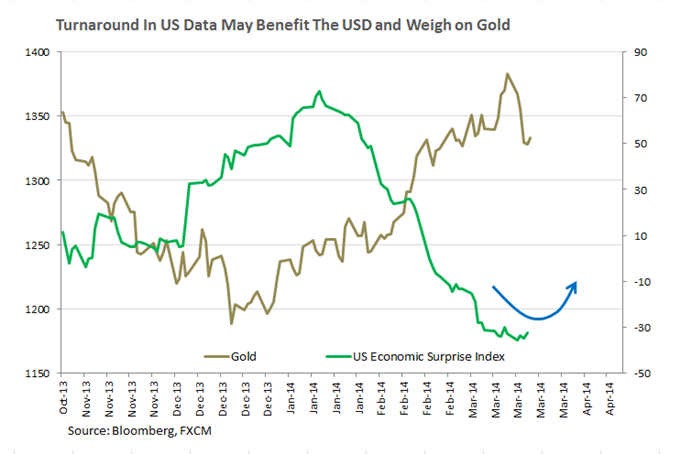 CRUDE OIL TECHNICAL ANALYSIS – A bearish technical bias is retained for crude oil as the commodity remains in a short-term downtrend. While a Bullish Engulfing candlestick pattern on the daily has hinted at a bounce, the signal has failed to receive confirmation. A break below support at $97.40 would likely open up the 61.8% Fib Retracement level ($96.70), while the psychologically-significant $100.00 handle offers notable resistance. 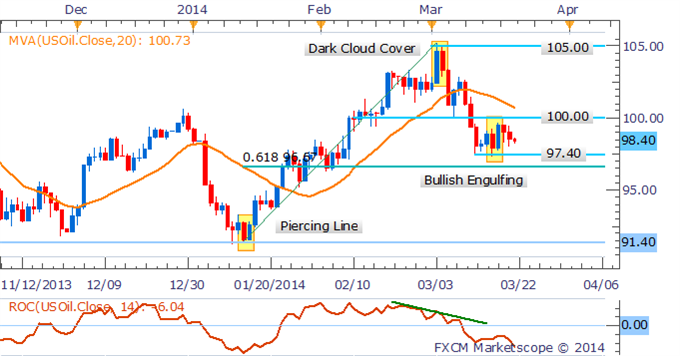 GOLD TECHNICAL ANALYSIS – Several bearish technical signals have emerged for Gold which may be warning of further declines for the commodity. The short-term trend has shifted to the downside, indicated by prices moving below their 20 SMA in addition to a negative rate of change reading and a break of the ascending trend channel. This follows from a warning offered by the Bearish Engulfing candlestick pattern that formed near the key $1,392 resistance level. The target offered by support at $1,320 was hit in recent trading and while buyers may prompt a short-term bounce, a recovery would be seen as an opportunity to enter new short positions. 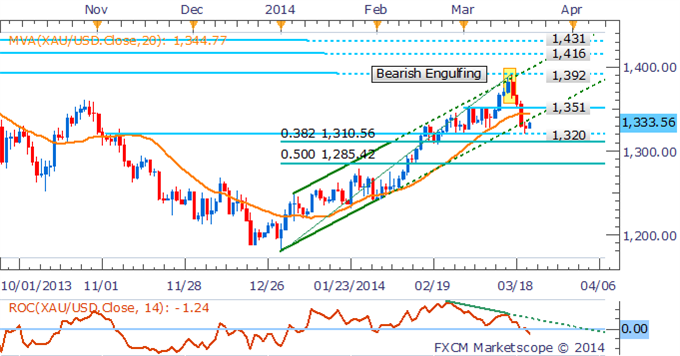 SILVER TECHNICAL ANALYSIS – Silver remains in a short-term downtrend as signaled by prices being below their 20 SMA and the rate of change indicator reflecting building downside momentum. This leaves shorts preferred with the break below key support at $20.50 opening up the 2014 lows at $19.00 as a potential target. 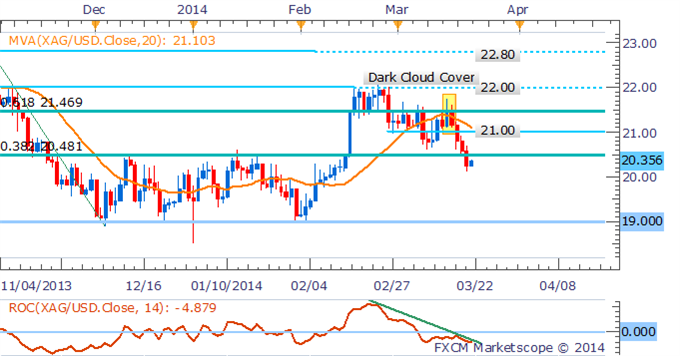 COPPER TECHNICAL ANALYSIS– The psychologically-significant $3.00 handle continues to offer noteworthy resistance for copper. A bearish technical bias is retained given the downtrend is still intact and the bullish reversal signal offered by the Hammer candlestick failed to receive confirmation. A break below strong buying support at $2.910 is required in order to open up new short entry opportunities. 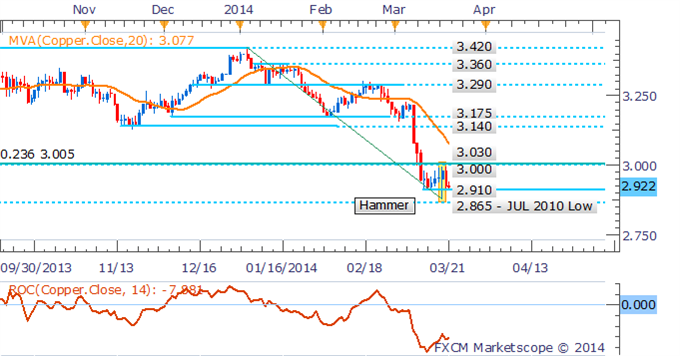