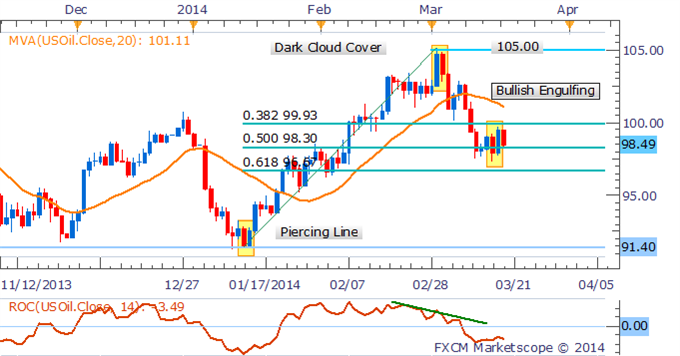 Oil Recovery Falters Near $100, Gold Stabilizes Ahead of Fed Meeting

Gold has found some support in Asian trading today near the prior breakout point at $1,351. This likely comes as the upcoming FOMC meeting prompts investors to pause their shift out of the precious metals and back into yield plays. Meanwhile failure to break a key technical level for crude oilhas left the commodity to give back most of yesterday’s gains, with further guidance to be offered by the upcoming DOE inventories report.

Gold Stabilizes Ahead of FOMC

Following two steep days of declines for gold and silver, the precious metals have found some relief as traders likely tread cautiously ahead of the March Fed meeting later in the session. Market expectations suggest another $10bn in stimulus cuts may be already priced in, hinting the spotlight may be on the Fed’s guidance around the direction of benchmark interest rates.

Traders will be given ample fodder to fuel future policy speculation with Yellen’s first press conference as Fed chair, as well as the updated set of economic forecasts from the Committee on tap. With the US unemployment rate edging lower, a firmer commitment from the central bank to eventually raise borrowing costs would likely support the US Dollar and weigh on gold.

WTI posted a strong session during US trading overnight alongside gains in risk-assets. However, a failure to break above the psychologically-significant $100.00 handle has likely prompted sellers to emerge, causing the commodity to erase some of its gains during Asian hours.

The Weekly Petroleum Status Report from the DOE set to cross the wires in the session ahead may offer additional guidance for the WTI contract. Crude inventories are anticipated to increase for a 9th consecutive week by 2,750K barrels according to the median estimate from economists. A higher-than-expected build would suggest new supply continues to outstrip demand for the commodity, which may weigh on crude oil prices.

The FOMC rate decision is also noteworthy for oil via its potential impact on risk trends. The push away from the dovish end of the policy spectrum by the central bank may leave investors to question where risk-assets, including US equities and crude, will find the fuel to run higher, potentially paving the way for a correction.

CRUDE OIL TECHNICAL ANALYSIS – A bearish technical bias is retained for crude oil as the commodity remains in a short-term downtrend. While a Bullish Engulfing candlestick pattern on the daily has hinted at a bounce, the signal is yet to receive confirmation from a successive up-day. Support rests near the 50% Fib Retracement level ($98.30) while the psychologically-significant $100.00 handle offers a notable resistance level.

GOLD TECHNICAL ANALYSIS – A test of trendline resistance and the $1,392 mark has prompted gold sellers to emerge and the formation of a Bearish Engulfing candlestick pattern on the daily. However, a bearish technical bias would not be offered until a shift in the trend is witnessed. Buying support is likely at the $1,351 mark. 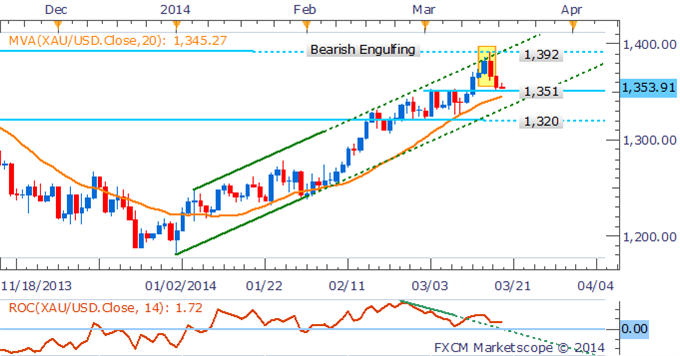 SILVER TECHNICAL ANALYSIS – The silver bulls seemingly lost their grip on the commodity near the $21.50 resistance level in recent trading as the downtrend resumes. A break below key support at $20.50 would offer new short entry opportunities with a target of the former range-bottom at $19.00. 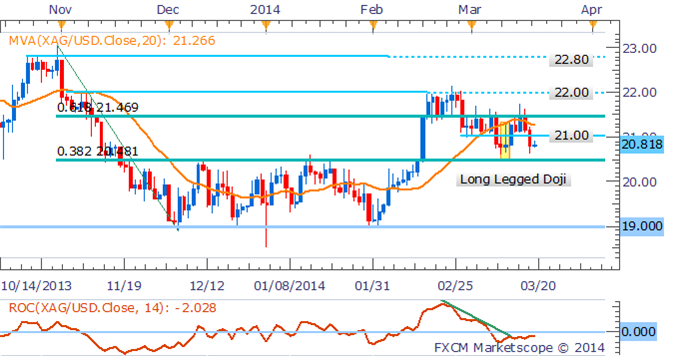 COPPER TECHNICAL ANALYSIS– Following a fleeting relief-rally for copper the commodity failed to break above the psychologically-significant $3.00 handle, which was suggested as an entry point for new short positions. Given the downtrend remains intact an extension back to the 2014 lows near $2.910 looks possible. 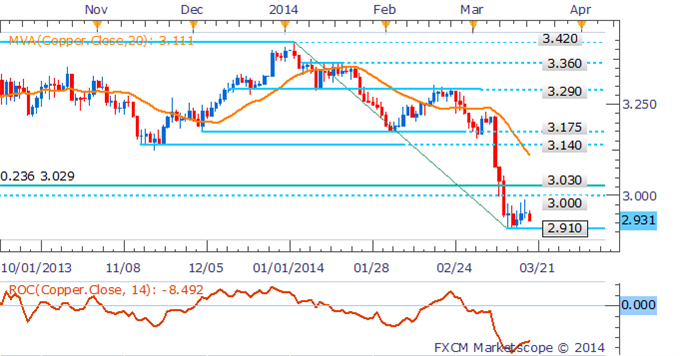