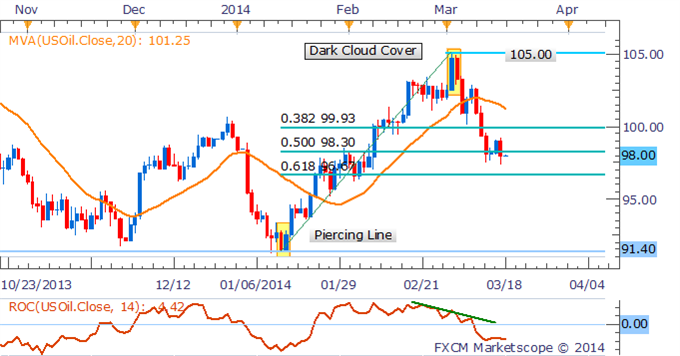 Crude oil has resumed its downward trajectory alongside declines in the precious metals space as traders look past the ongoing standoff between Russia and the West. Upcoming German ZEW figures may prove noteworthy for the commodities space given their potential impact on risk trends, while US CPI data may elicit a limited response from goldas traders likely focus on the upcoming FOMC rate decision.

Gold has dropped back to the $1,360 level during the Asian session today as traders shift out of safe-haven plays and into high-yielding instruments. The pullback comes following a dramatic run-up in the precious metal culminating in a six month high near $1,400 on Friday. The bull-run was likely driven by heightened geopolitical concerns surrounding Eastern Europe.

The relatively peaceful passing of a referendum to return Crimea to Russia over the weekend has likely eased investor fears of the potential for armed conflict and thus dampened safe-haven demand for gold. However, with a resolution to the standoff seemingly out of reach, a fresh sparkmay stand to quickly dampen investor sentiment and drive traders to back to the precious metals.

Crude oil traders have likely seen the most recent developments in Eastern European as posing a limited risk to energy supply disruptions from Russia, which may havecontibributed to WTI’s fall below $98.00 in recent trading.

Upcoming German ZEW survey data may prove noteworthy for the growth-sensitive commodities like copper and crude oil given their potential to influence risk-trends. The gauge of expectations for economic growth in the largest eurozone member has steadily improved over the past year, and an upside surprise to the latest reading may bolster risk sentiment and help support crude oil.

US Inflation Data On Tap

As gold traders look past geopolitical tensions their gaze may turn to upcoming US inflation data set to cross the wires in the session ahead. A higher-than-anticipated CPI reading may feed firmer Fed policy expectations and strengthen the US Dollar, which in turn could weigh on gold. However, the potential impact of the release may be limited as traders are likely hesitant to alter their positioning ahead of the highly-influential FOMC meeting set to conclude later in the week.

CRUDE OIL TECHNICAL ANALYSIS – A bearish technical bias is retained for crude oil as the commodity remains in a short-term downtrend. This follows on from a Dark Cloud Cover candlestick formation on the daily that helped foreshadowed a correction. Additionally, the rate of change indicator has grown more negative, signaling building downside momentum. Following the break below buying support near the 50% Fib Retracement level (98.30) the commodity is eyeing the $96.70 mark.

GOLD TECHNICAL ANALYSIS – A test of trendline resistance and the $1,392 mark has prompted gold sellers to emerge and the formation of a Bearish Engulfing candlestick pattern on the daily. However, a bearish technical bias would not be offered until a shift in the trend is witnessed. Buying support is likely at the $1,360 handle. 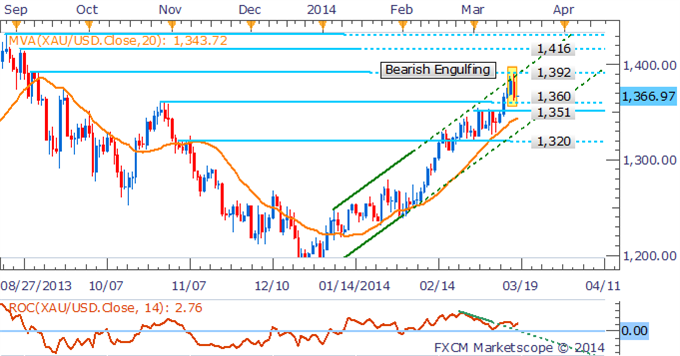 SILVER TECHNICAL ANALYSIS – The silver bulls seemingly lost their grip on the commodity near the $21.50 resistance level in recent trading as signs of a shift to an uptrend fade. A break below key support at $21.00 would offer new short entry opportunities with a target of the former range-top at $20.50. 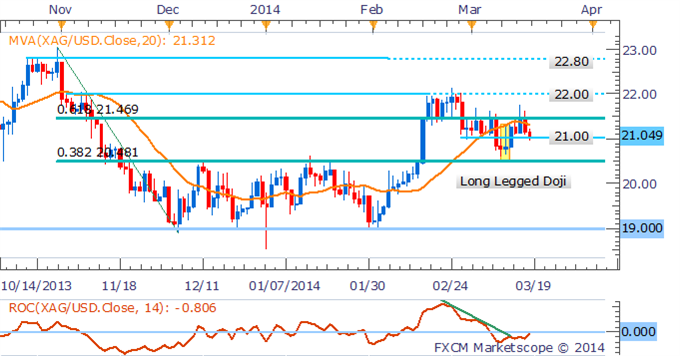 COPPER TECHNICAL ANALYSIS– The relief-rally for copper is encountering some resistance at the psychologically-significant $3.00 handle in Asian trading. Given the downtrend remains intact the bounce is seen as an opportunity to enter new short positions with a target of the recent lows near $2.910. In the event of a break above $3.00, sellers are likely to emerge at the 23.6% Fib Retracement level at $3.030. 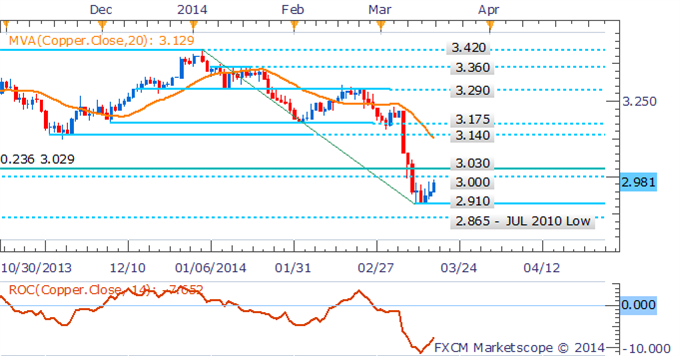