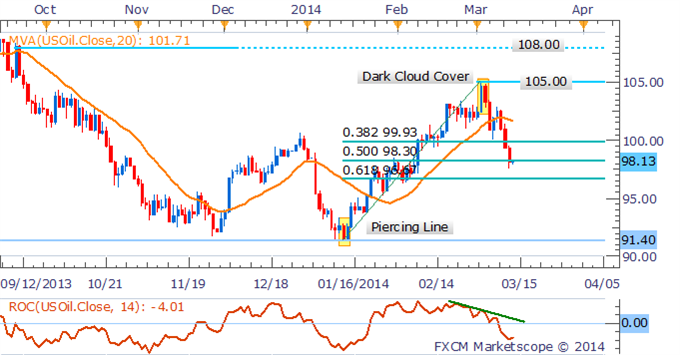 The gold bulls are on the charge with the precious metal breaking above the $1,360 level as elevated geopolitical tensions have likely bolster safe-haven demand for the commodity. Meanwhile crude oil is struggling in late Asian trade following declines during US hours on the back of a bearish inventories report.

Ukrainian tensions continue to dominate news headlines which has likely driven investors towards gold and silver as alternative stores of wealth. As noted in yesterday’s commodities report the yellow metal generally performs well during periods of heightened geopolitical turmoil. While the West threatens sanctions against Russia, the stand-off looks set to continue, which may act to support gold prices.

The precious metals space has also likely benefited from a weaker US Dollar. The greenback has continued to flounder over the past month with lukewarm US economic data likely weighing on Fed policy expectations. Traders should be mindful of the potential for the US Dollar to recover some lost ground in the session ahead on the back of hawkish comments from would-be Fed Officials Fischer, Brainard, and Powell at their upcoming confirmation hearing. Retail sales data from the world’s largest economy may also prove noteworthy, as a better-than-expected reading may feed into “taper” bets and weigh on the precious metals.

The Weekly Petroleum Status Report released by the DOE overnight revealed the 8th straight gain in crude oil inventories which sent the WTI contract lower. Newswires have attributed the build in inventories to seasonal factors including more moderate weather on the US East Coast and lower demand from refineries. If fresh supply continues to outstrip demand for the commodity in the coming weeks, oil may extend its recent declines.

Copper has erased earlier gains towards the end of Asian trading following the release of a disappointing set of Chinese Industrial Production and Retail Sales data. The worse-than-anticipated prints add to already existing concerns over slowing demand for commodities from the Asian giant. If traders during European hours run with the story, we may see copper and growth-sensitive commodities take their next leg lower. However, if broad-based risk aversion fails to materialise, any declines may be muted.

CRUDE OIL TECHNICAL ANALYSIS – A bearish technical bias is retained for crude oil as the commodity remains in a short-term downtrend. This follows on from a Dark Cloud Cover formation on the daily that foreshadowed a bearish reversal. Additionally, the rate of change indicator has grown more negative, signaling building downside momentum. While buying support near the 50% Fib Retracement Level has slowed crude’s declines, an extension towards $96.70 looks possible. 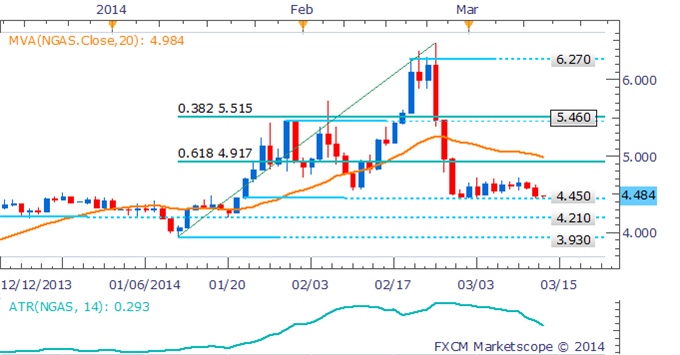 GOLD TECHNICAL ANALYSIS – Gold has seemingly shrugged off a bearish reversal signal provided by the Dark Cloud Cover candlestick formation on the daily. With prices holding within their upward trend channel and above the 20 SMA the uptrend remains intact. The $1,375 may offer near-term resistance, while support rests at the breakout level at $1,351. 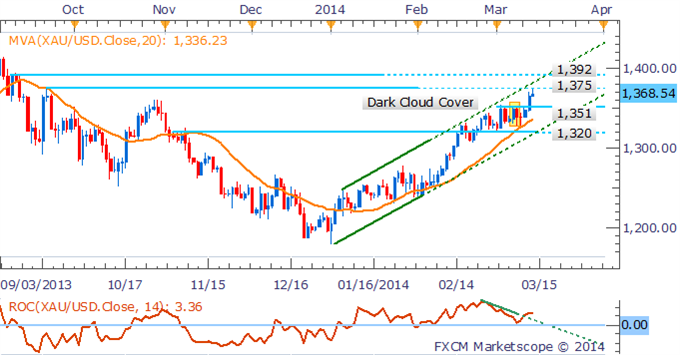 SILVER TECHNICAL ANALYSIS – A downtrend has emerged for silver signaled by the 20 SMA and ROC indicator. While we remain below $21.50 shorts are preferred. A break below former resistance-turned-support at $20.50 would open up the prior range-low at $19.00. 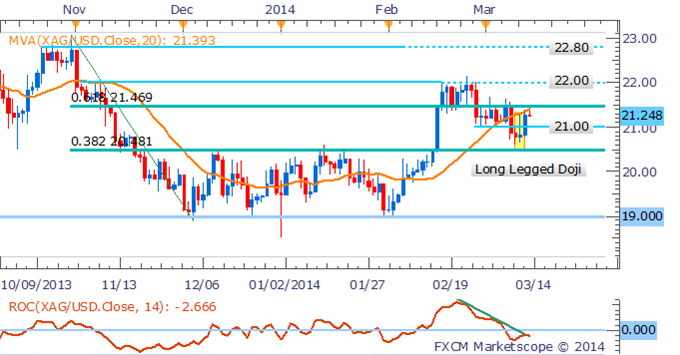 COPPER TECHNICAL ANALYSIS– The bears have regained their grip on copper pushing the metal to its October 2011 low at $2.930. While we retain a bearish technical bias for the commodity, given the magnitude of the recent declines, chasing further falls may carry too much risk. As such new short entries are preferred on a corrective bounce. 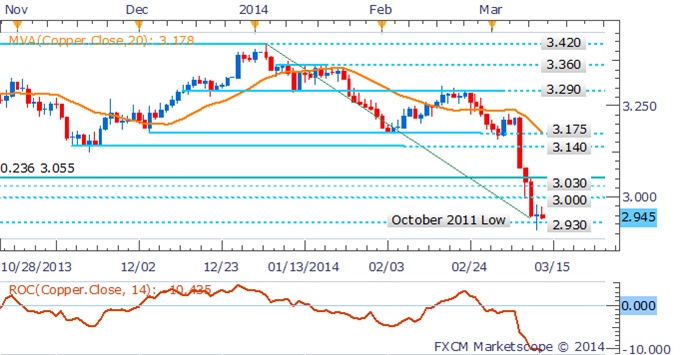