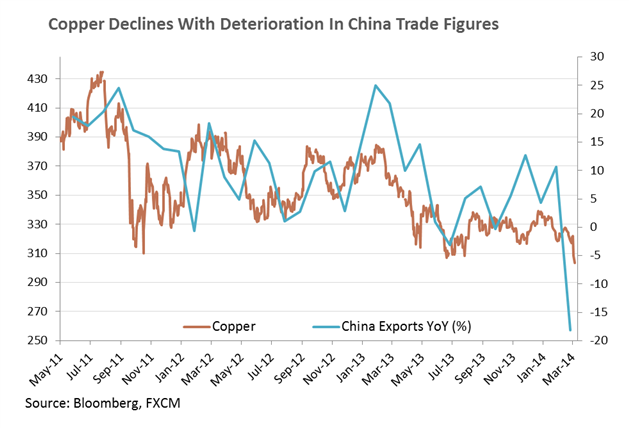 Copper steals the spotlight in today’s commodities report as the metal continues to collapse and has edged out a fresh 2014 low in Asian trading. Meanwhile gold has fallen from the key $1,351 mark as the US Dollar recovers some lost ground.

Copper Drops to $3.000 on China Concerns

Copper has suffered its largest drop since 2011 with newswires attributing the declines to concerns over future demand for the commodity from China, the world’s largest copper consumer. Following Friday’s declines, the commodity has continued to fall in Asian trading today as the market reacts to a disappointing set of trade figures from China. Exports from the East Asian giant unexpectedly declined by 18.1 percent which was the lowest reading since 2009.

With few economic releases scheduled for China over the week ahead, traders may be left wanting for a fresh catalyst to push the commodity lower. However, the growth-sensitive metal remains vulnerable to surprise negative-economic news flow out of the emerging markets.

The better-than-anticipated NFP print on Friday helped the greenback to recover some lost ground and weighed on gold and silver. Despite a tick-up in the unemployment rate, the improvement in jobs growth is an encouraging sign for the US labour market and suggests a pause to stimulus cuts from the Fed is unlikely, which in turn is bullish for the US Dollar. Continued improvements to economic data out of the world’s largest economy and pro-“taper” talk from Fed officials set to speak this week may help the reserve currency recover further, and may weigh on gold and silver.

On the geopolitical front, a flare-up in the ongoing Ukrainian-Russian stand-off would likely benefit the precious metals space, as well as bolster crude oil and natural gas prices. Oil posted its biggest daily percentage gain for the year when tensions between the two nations escalated at the beginning of the month, which sparked concerns over potential supply disruptions from Russia.

CRUDE OIL TECHNICAL ANALYSIS – Several technical signals continue to warn of a potential shift to a downtrend for crude oil. Prices are wavering around their 20 SMA and key support at $102.00 suggesting some indecision amongst traders. Additionally, A Dark Cloud Cover candlestick pattern on the daily has received confirmation via successive down day. A bounce in crude prices is likely to encounter resistance at the 2014 near $105.00. 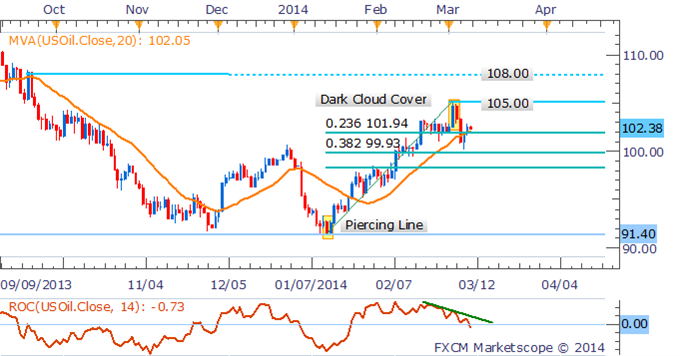 NATURAL GAS TECHNICAL ANALYSIS – Buyers remain prepared to support the natural gas price at the 4.450 mark as the commodity stabilize following dramatic declines at the end of February. With the 20 SMA signaling a downtrend, a corrective bounce at this stage would be seen as an opportunity to enter new short positions. Resistance is likely looming at former support near 4.917 (the 61.8% Fib Retracement level). 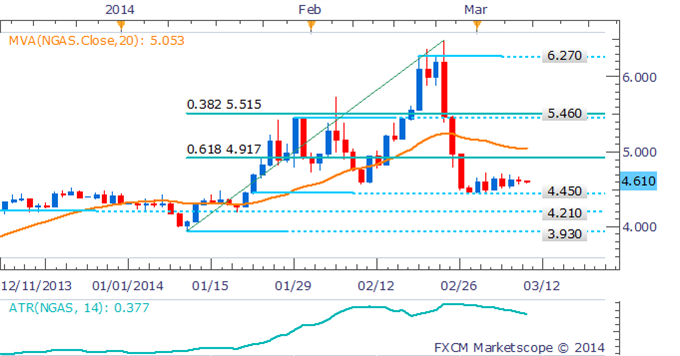 GOLD TECHNICAL ANALYSIS – Gold’s uptrend is showing signs of fading momentum as the rate of change indicator ticks towards the 0 mark. With resistance at 1,351 keeping the bulls in their pens for the time-being further near-term gains look like a bit of a stretch. The emergence of a Dark Cloud Cover formation on the daily is a warning signal, however it would be too soon to suggest a bearish reversal given prices remain within their upward trend channel and above the 20 SMA. 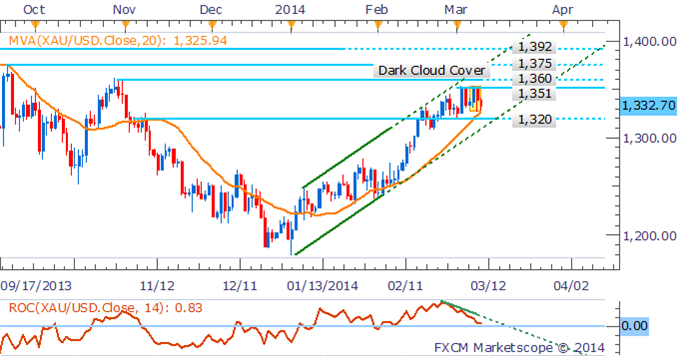 SILVER TECHNICAL ANALYSIS – A downtrend has emerged for silver following signaled by the 20 SMA and ROC indicator. Shorts are preferred on a break below former resistance-turned-support at $20.50 which would open up the prior range-low at $19.00. 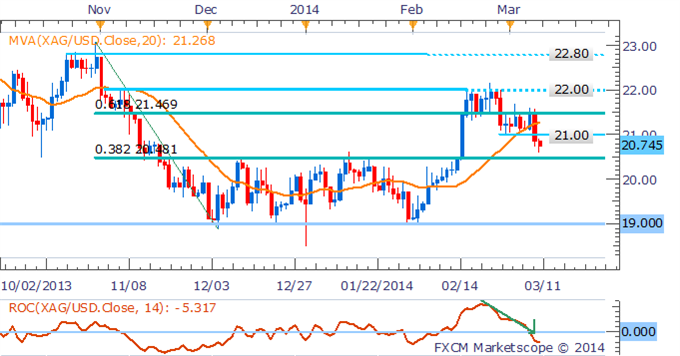 COPPER TECHNICAL ANALYSIS– Traders are likely to continue to watch the $3.235 resistance level which may act to cap further gains for copper. With prices below their 20 SMA and a negative reading from the rate of change indicator, there is a suggestion that the bears are likely to return. Thus an upside bounce may be seen as an opportunity to enter new short positions. 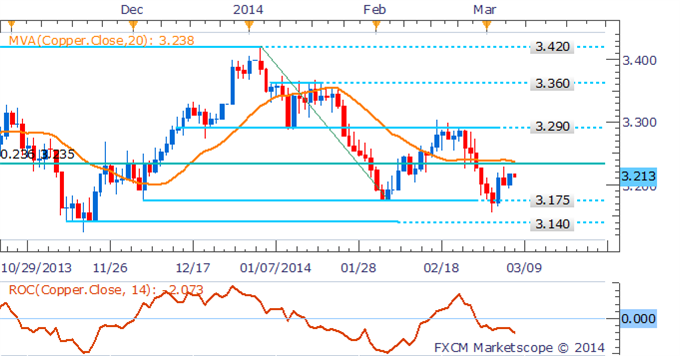