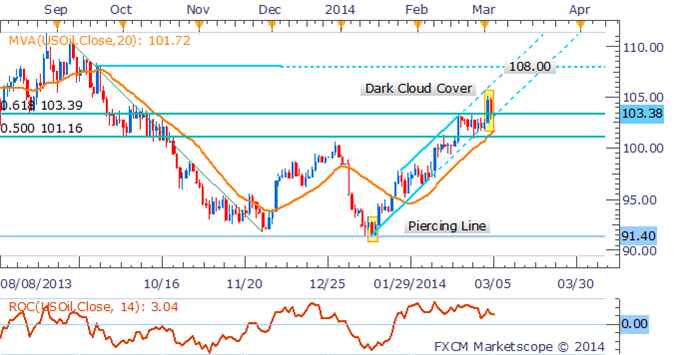 Crude Oil and Gold Give Back Gains As Ukrainian Tensions Ease

Crude oil and gold have retreated off their 2014 highs as easing tensions in Eastern Europe have likely led traders to unwind some of their fear-fuelled positioning in the commodities. Risk sentiment is likely to provide further influence over the precious metals in the session ahead, with additional cues offered by upcoming US non-manufacturing figures and inventories data.

Gold and silver have suffered as dissipating concerns surrounding a potential Ukrainian-Russian conflict have likely weakened safe-haven demand for the precious metals. This comes following reports from newswires that Russian President Vladimir Putin sees no immediate need to invade its Eastern European neighbour.

The Department of Energy’s Weekly Petroleum Status Report is set to cross the wires in early US trading which is likely to offer further guidance for crude oil traders. WTI’s strength over recent weeks has coincided with 5 consecutive weekly declines in inventory levels at Cushing Oklahoma, which suggests increasing demand for the commodity. Another drawdown may prompt a bullish response from traders and send crude higher.

Broader risk-trends are likely to remain an important driver for the commodities space over the remainder of the week. If the Ukraine fuse is reignited, it is likely to drive renewed demand for gold and crude oil. On the data front, upcoming US ISM non-manufacturing figures may also prove noteworthy. With investor sentiment improving, an upside surprise may bolster demand for risk-sensitive commodities like copper.

CRUDE OIL TECHNICAL ANALYSIS – We’re back at the key 103.40 mark for crude following a notable correction for the commodity. With an uptrend still in place we are left with a bullish technical bias with a potential target offered by the September 2013 high at $108.00. However, a Dark Cloud Cover candlestick formation may be warning of a potential reversal, follow-through from a successive down day would be needed to confirm the bearish signal. 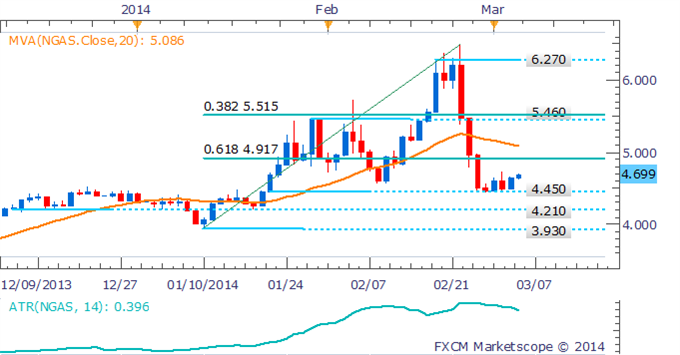 GOLD TECHNICAL ANALYSIS – Gold has retraced some of its recent gains towards the 1,320 support mark. This has resulted in the emergence of a Dark Cloud Cover candlestick pattern on the daily which may be hinting at further declines for the commodity. However with the uptrend intact, a bullish bias remains preferred for the precious metal with a potential target offered by the October 2013 highs near $1,360. 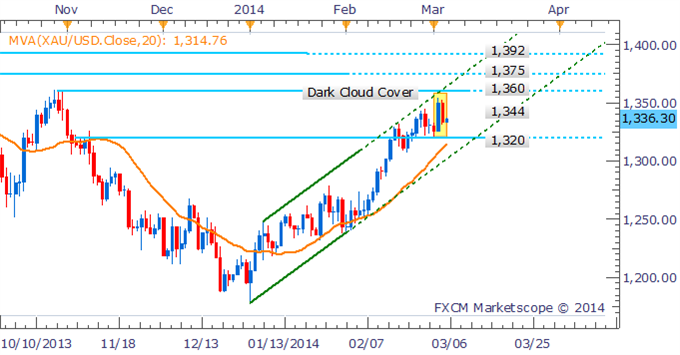 SILVER TECHNICAL ANALYSIS – The bulls were unable to hold onto gains for silver above the critical 21.50 mark in intraday trading. As noted in yesterday’s commodity report, the rate of change indicator has signaled a fading of upside momentum and is warning of a shift towards a downtrend for the precious metal. 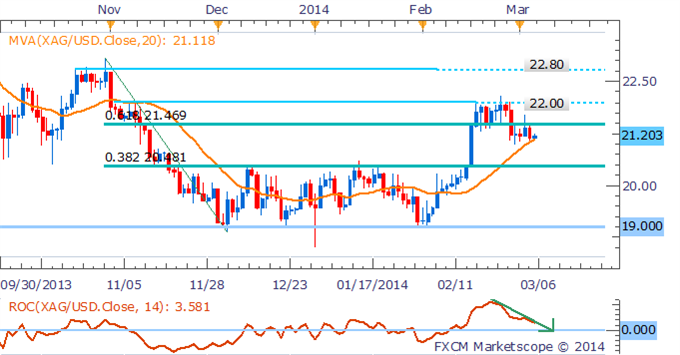 COPPER TECHNICAL ANALYSIS– As noted previously the $3.175 mark remains an important support level for copper. While a notable bounce has taken place, sellers are restraining further gains at $3.235 which may offer an entry for new short positions. 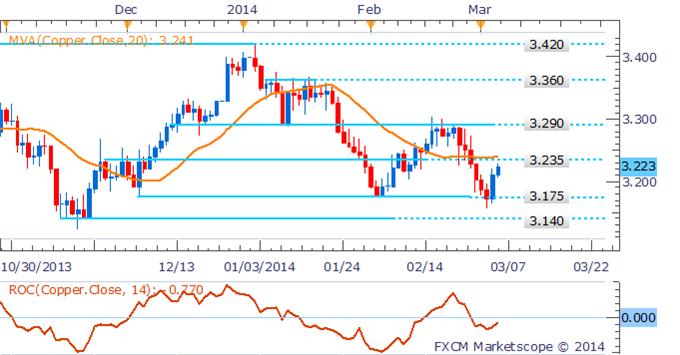