Crude oil is breaking out in intraday trade while gold has tested its 2014 high as mounting tensions surrounding the Ukraine and Russia drive price action in Asian trading. A busy calendar for the week ahead offers additional event risk that is likely to fuel further volatility in the commodities space.

The prospect of conflict in the Ukraine has raised speculation that supply of energy commodities from Russia may be disrupted, which in turn has bolstered the price of natural gas and crude oil.

Just over 30 percent of the EU’s oil and natural gas imports during 2010 originated in Russia according to Eurostat, with roughly 80% of the natural gas supplied through pipelines travelling through the Ukraine. Thus sustained tensions between the two nations may crimp energy supply to Western Europe and fuel a further rise in energy prices.

Demand for precious metals has also been boosted as the mounting geopolitical risks in Eastern Europe prompt investors to look for an alternative store of wealth. Gold has broken out above above its 2014 high in Asian trading as silver has recovered ground towards the critical $21.50 mark.

Elsewhere in the metals space, copper is heading for its sixth straight day of losses as Chinese manufacturing data released during the Asian session has fuelled concerns over a deceleration in the world’s second largest economy.

Ice on The Road Ahead of Key Economic Data

Today’s dramatic declines in equities on the back of geopolitical events suggests that investor sentiment may be vulnerable to further negative news-flow. With a plethora of fundamental events ahead on the calendar this week the market is likely poised for a spike in volatility which may offer breakout opportunities.

If the US ISM manufacturing figures due in the session ahead continue a string of recent disappointing readings for US economic data risk aversion would likely be exacerbated. However, which direction the precious metals space may take is made somewhat unclear by the implications for the US Dollar. While a souring of investor sentiment and the ensuing safe-haven demand may strengthen the greenback, speculation of a less aggressive ‘taper’ may undermine the reserve currency.

CRUDE OIL TECHNICAL ANALYSIS – Crude oil is breaking out in intraday trade and a daily close above selling pressure at 104.00 may pave the way for what would be a sizeable advance towards the 108.00 handle. With prices above their 20 SMA there is a signal that the uptrend remains intact.

NATURAL GAS TECHNICAL ANALYSIS – Buyers have emerged at the 4.450 mark for natural gas as the commodity recovers some of its sizeable declines last week. With the 20 SMA signaling a downtrend, a corrective bounce at this stage would be seen as an opportunity to enter new short positions. Resistance is likely looming at former support near 4.917 (the 61.8% Fib Retracement level). 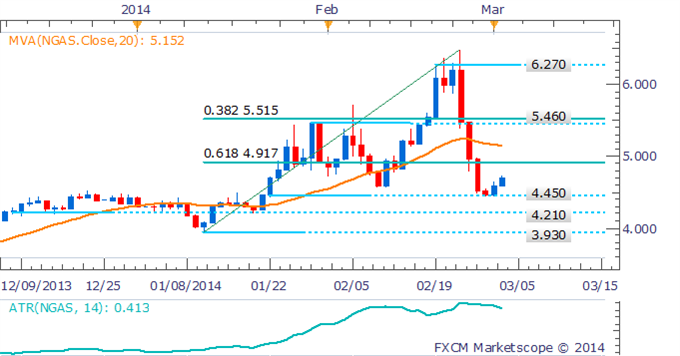 GOLD TECHNICAL ANALYSIS – Gold has recovered all of the ground lost over the preceding week during early Asian trading as the precious metal tests its high for the year near 1,344. A daily close above that level, against the backdrop of an ongoing uptrend would support a bullish advance towards the October high at 1,360. 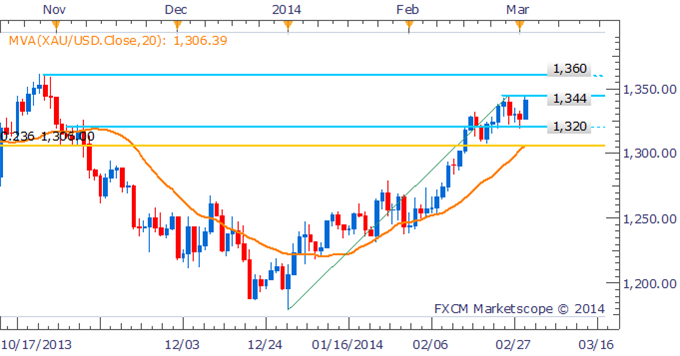 SILVER TECHNICAL ANALYSIS – Silver is lagging behind its bigger brother gold as the metal trades near the key resistance at 21.50. The uptrend remains intact with prices above their 20 SMA. However the rate of change indicator is suggesting a fading of momentum. 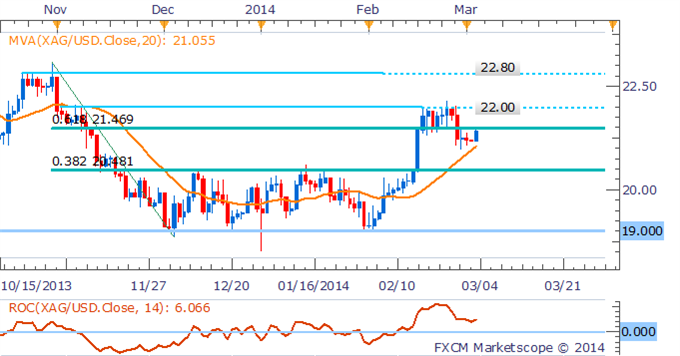 COPPER TECHNICAL ANALYSIS– Copper is flirting with support at $3.175 following a break through the 23.6% Fib Level at $3.235. With a shift in the trend indicated by prices moving below their 20 SMA a bearish technical bias is maintained. The next level of buying support is likely at the November lows near 3.140. 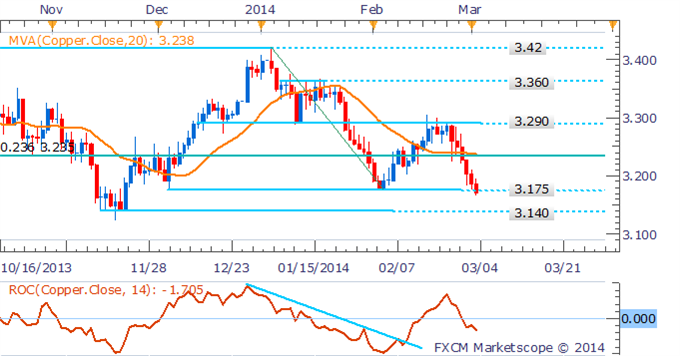