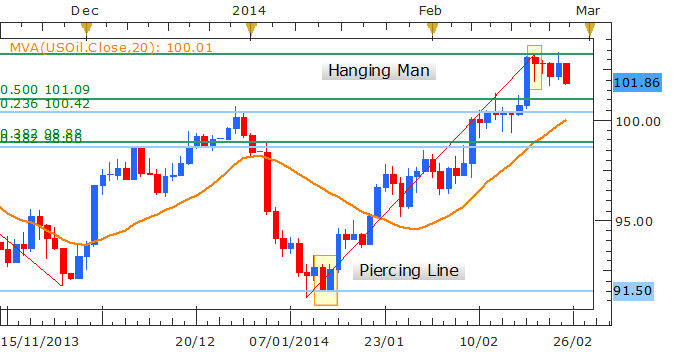 Copper Extends Declines, Gold Falters At Resistance Ahead Of US Data

Gold and silver are giving back some of their recent gains as the two precious metals encounter selling pressure at key resistance levels. Meanwhile crude oil and copper are suffering alongside a broad-based decline in risk assets as traders are likely looking to book profits following the recent run-up in prices.

Sellers have put the brakes on further gains for gold following a test of the 1,336-1,339 resistance zone in Asian trading. Silver has also encountered selling pressure around the key $21.00 figure. Curiously, the weakness witnessedin the precious metals has not coincided with broad-based US Dollar strength as has been the case in the past. Indeed, the reserve currency appears to have weakened against most majors during session. This suggests some profit-taking near key resistance levels may explain the pullback in gold and silver.

Following a dramatic plunge lower for copper yesterday, the commodity has continued its decline in Asian trading. This has been mirrored by a general drift lower for risk assets during the session including with crude oil. Interestingly, this has arisen in the absence of noteworthynegative news-flow, which hints that again profit-taking on recent gains may be a potential reasoning for the declines.

The rally in risk assets over the past few weeks highlights an aura of complacency surrounding a string of disappointing US economic data prints, as well as a discounting of firmer Fed ‘Taper’ expectations. A continuation of this spirit may see the impact of downside surprises from upcoming US Consumer Confidence data and housing figures as limited. However, if they prove to be the straw that broke the camel’s back, and another bout of risk aversion were sparked, then the ensuing safe-haven flows to the US Dollar would likely weigh on gold and silver prices.

CRUDE OIL TECHNICAL ANALYSIS – The 61.8% Fib Retracement level from the September High at $103.30 has acted to cap oil’s advance for the time-being. A Hanging Man candle formation on the daily is hinting at a reversal, however, a shift to a downtrend would be required before offering a bearish technical bias.

GOLD TECHNICAL ANALYSIS – Sellers are acting to cap further gains for gold as the precious metal struggles to advance beyond the key $1,336 level. An upside breakout would offer a target of the October highs near 1,360. 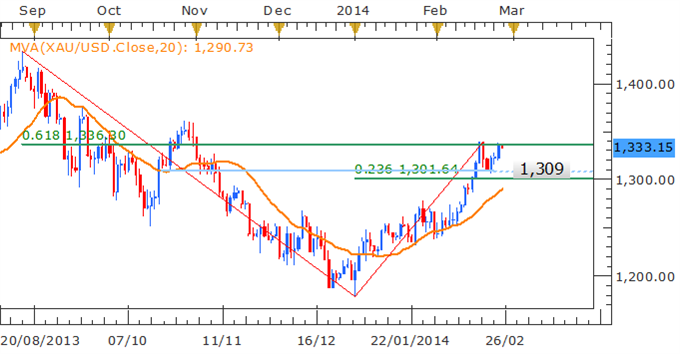 SILVER TECHNICAL ANALYSIS – The silver bulls were unable to hold onto their grip on the commodity as the precious metal failed to hold above the 22.00 in recent trading. Support is likely to emerge at the 21.257 mark (23.6% Fib Retracement level). 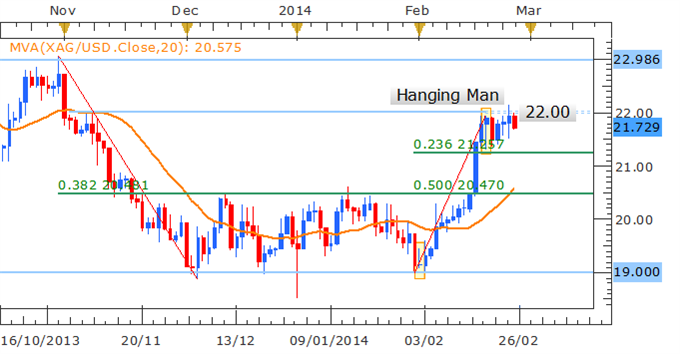 COPPER TECHNICAL ANALYSIS– Sellers are pushing copper through buying support around $3.240 (50% Fib Retracement level) as the commodity continues its steep decline. A shift in the trend looks to be underway as prices move below the 20 SMA in intraday trade. A potential target for short positions would be offered by the 2014 low near $3.175. 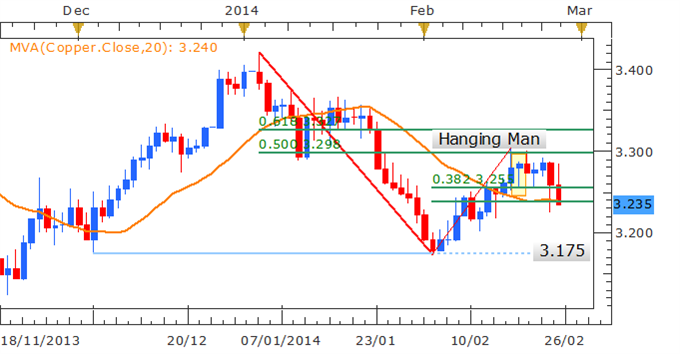